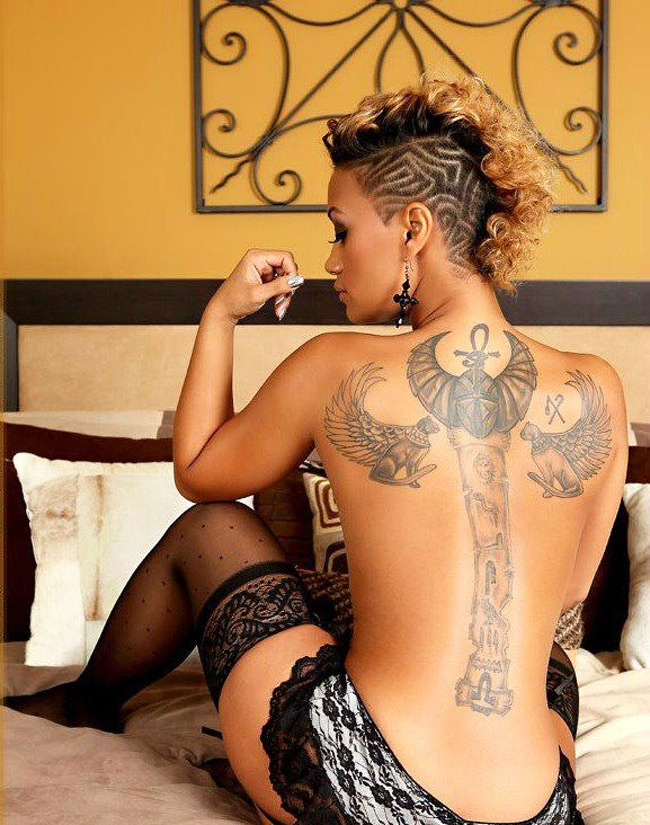 An undercut hairstyle women currently consider as one of the trendiest in 2016, is an extremal type of haircut with one or both temple areas cut very short or even shaven. Although it's a very popular men's style, women also keep up with the trend. Consider the idea and look through our top 40 women's undercut hairstyles.
Simply shaving the side of your head is so two years ago. These days, some women are taking the undercut to a whole new level by using them to create a pseudo "hair tattoo."

Pop star Madison Beer posted a picture of her hair up in a bun after a SoulCycle session. At first glance, it looks like a regular topknot, but if you look closely, you'll see that Beer has the bottom part of her head shaved into a design.

Anya Ayoung Chee's right and left side of of her head represent her past and present.

On the left is a mane of dark locks that reaches the middle of her back. They helped the Trinidadian compete in the 2008 Miss Universe beauty pageant.

On the right side, her head is shaved down to a short stubble, representing her current identity as an edgy Harlem-dwelling fashion designer.

"I just believed that hair carries memories," said Chee, 30, who left the beauty queen life three years ago when she got the new look.

"When I cut it off I let go of the past and looked to the future."


The side shave - also known as a floppy Mohawk and a partial undercut - has been a growing trend among fashion forward women. From Miley Cyrus putting pictures of her new shaved-side blonde hairdo on Twitter to Karl Lagerfeld's model muse with a partially shorn scalp appearing in  Chanel's 2012 "Boy" campaign, the style has been propelled into the mainstream.

"I woke up one morning and said 'I am going to do it,'" said Caroline Tseng, 24, who runs the fashion blog Street-Spotted. "The hair dresser was like 'Are you sure you want to do this?'"

The side shave for women has been a simmering trend amongst the fashion forwards for 18 months. The night before she had bumped into a friend at a party who had the style, which becomes instantly incognito by flipping the longer hair over the shaved section like a giant comb over.

"I didn't realize she had the haircut until she put her hair up and I realized I had nothing to lose," said Tseng, who also holds down a corporate job in advertising. After months of pondering the style, it was a solidarity shave by a friend that pushed Williamsburg resident Brit Resetar over the edge.

"She went first and I said 'Ok let's do it,'" said Resetar, 24, whose boyfriend spontaneously completed the task during a social gathering in January. Resetar fears "that awkward" stage when she would eventually decide to grow her hair out again, but for now her long black hair is a complete contrast to the dramatic shaved side.

At 29, Liz Horton feared getting the shave would put her in the midlife crisis box, but a recent end to a long-term relationship spurred her on. "Oh man, am I crazy?" asked Horton, as she waited for her partial undercut at Lower East Side salon Pimps & Pinups.

"Its just hair and it will grow back if I don't like it," she reassured herself. "All of this hair has seen a lot, so if you get rid of it it's kind of like starting fresh," said Lizzy Weinberg, a hair stylist at the salon on Stanton Street. 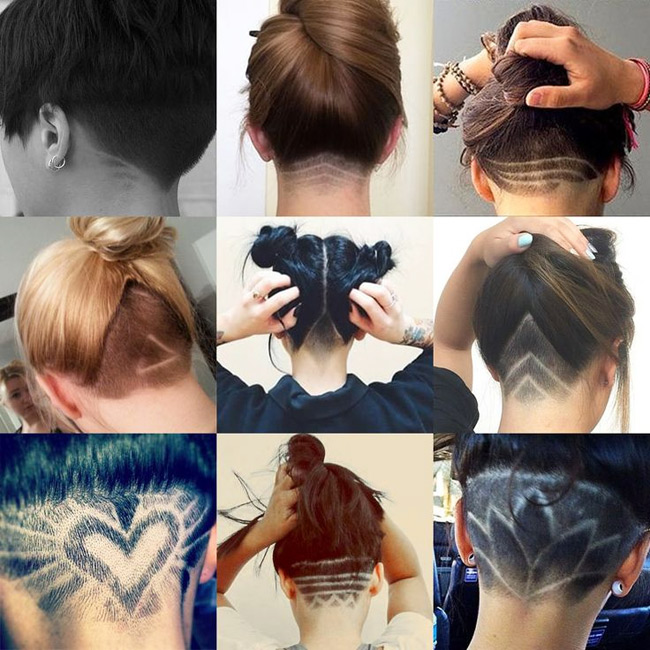 With a buzz of the razor, Weinberg got to work as Horton's long dark locks fell to the ground. "Not everyone can rock it," said Weinberg. She accredited the trend to British model Alice Dellal who did the partial shave about two years ago. Dellal later became Lagerfeld's muse in the Chanel "Boy" campaign.

However, dealing with the lingering taboo against women with shaved heads - think Britney Spears' 2007 meltdown with accompanying head shave - has been difficult for those with the look.

"When I first got it done apparently one executive thought I must be going through a lot of emotional trauma," laughed Tseng. "There have been some funny comments," she added.

For Resetar, convincing her Italian mother she is still on the straight and narrow has been difficult. "'You move to New York, you get your head shaved and tattoos,'" said Resetar, repeating her mother's anxious comments. "She doesn't get it - different worlds, different times."

Along with Resetar's mother, Russell Manley, the founder of salon Tommy Guns on Ludlow Street, is also not a fan of the look. "We are kind of reluctant to do it," he said, even though a few clients a week come in to get their monthly re-shave. He referred to it as a "lame, half attempt" at a full head shave, but acknowledged its benefits.

"They can feel edgy and still be conservative," said Manley. As for Chee, who is in the midst of preparations to show at this upcoming New York fashion week, the cut gives her a versatile look.

"I love it. It has become so much a part of me," she said. "I felt trapped by the rules and this hair style really released me to be myself."

Undercut hairstyle is like the cooler, smarter, less-committed version that has some serious fit-girl benefits. Shaving the underside of your head a) will help keep your neck extra cool during those sweaty workout sessions b) it adds a super edgy touch to your bad-hair-day topknot and c) you can't even tell that it's missing when your hair is down. It's gaining traction on Instagram and Pinterest just in time for you to get one for summer. 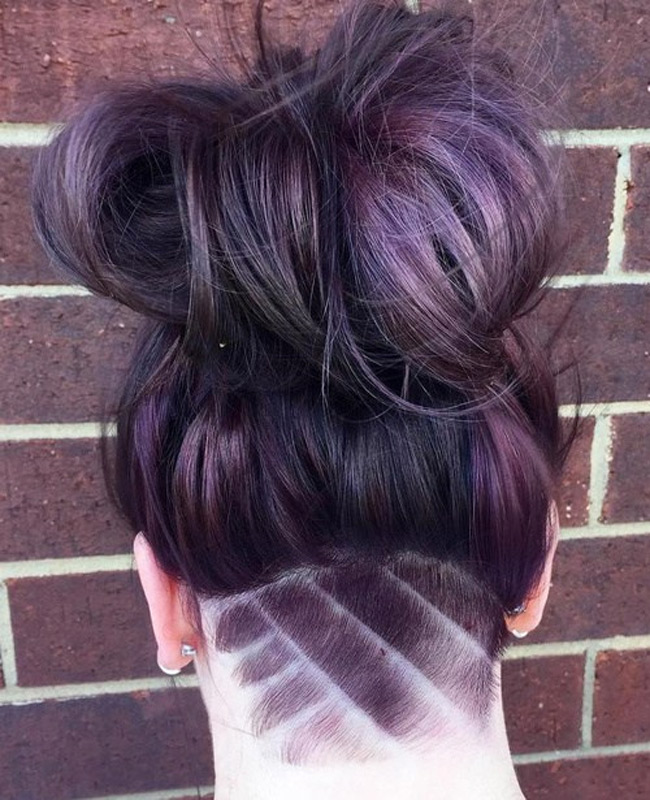 The great part about shaved details with long hair is they can easily be covered up when needed, so, get as creative as you want. Etched lined add texture to the flat section, while the messy high bun is trendy and playful. 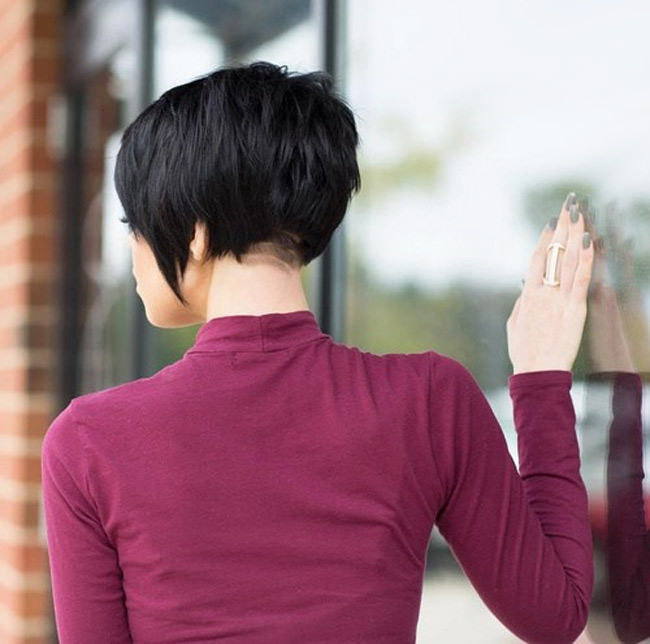 An undercut hairstyle does not always have to be the star of the show, sometimes it can just be a supporting detail. The Voluminous shaggy angled bob is sur to grag attention, but the buzzed detail at the neck of your will keep all eyes on you. 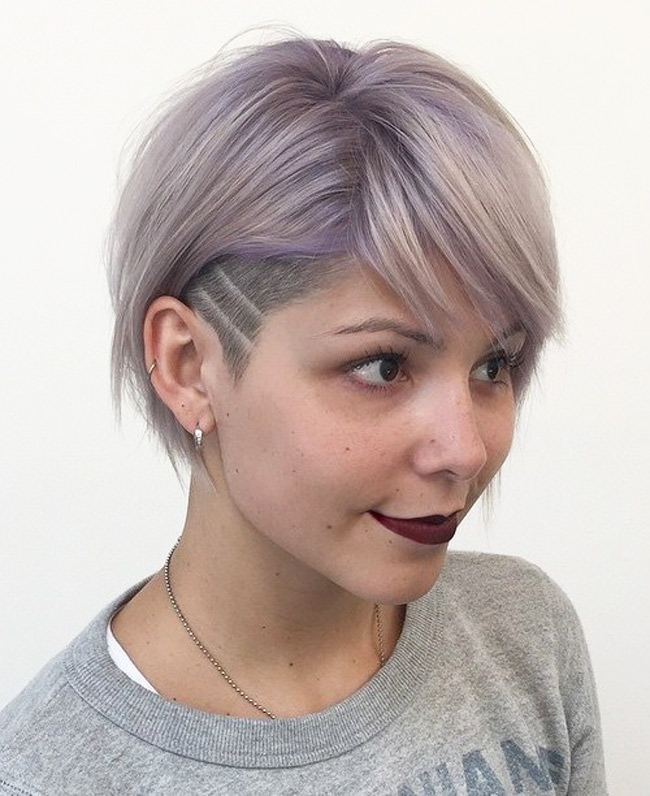 An undercut does not just have to be in the back, it can also be used as a fun detail to accent your face on the side. You can brush over it when you become tired of it or want to let it grow out. This short section will work well on chin-length to long hair- just make sure you have enough length to cover it up. 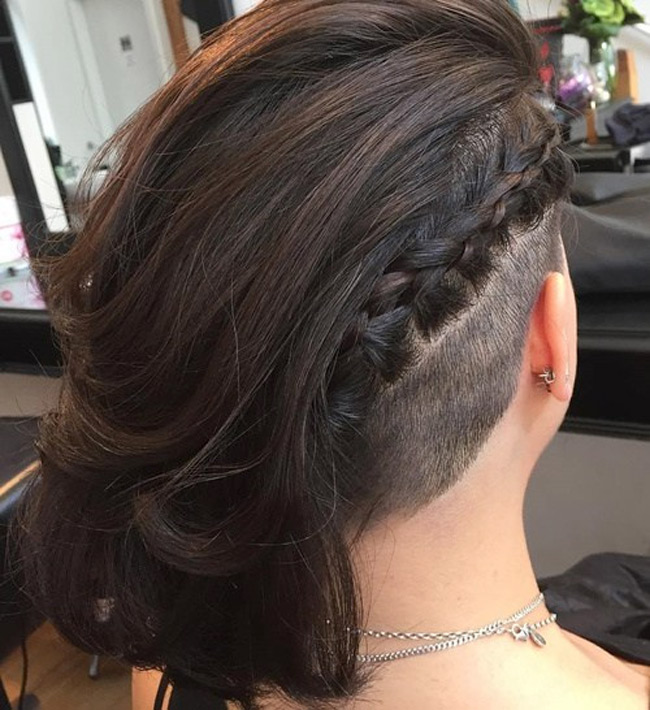 Can't choose between long and short? With this style you won't have to. This daring half-and half style conbines shoulder-length hair and a cropped side plus a french braid to tie them together. Soft curls balance out the edgy for women. 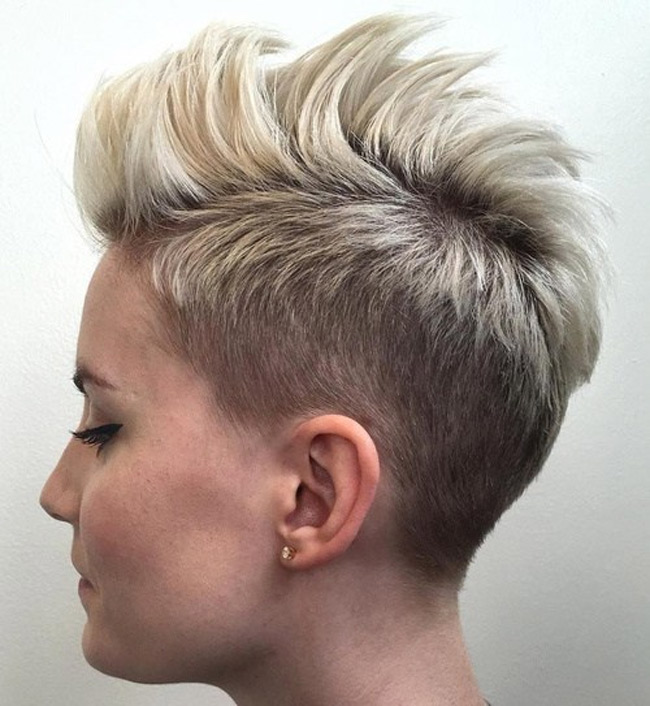 A Mohawk is one of the most popular shaved hairstyles for women, but that also means that it can be the most common and expected. Take yours a step further with a two-toned blonde and black style. Make it modern by opting for a cool-toned ash shade instead of a golden hue. 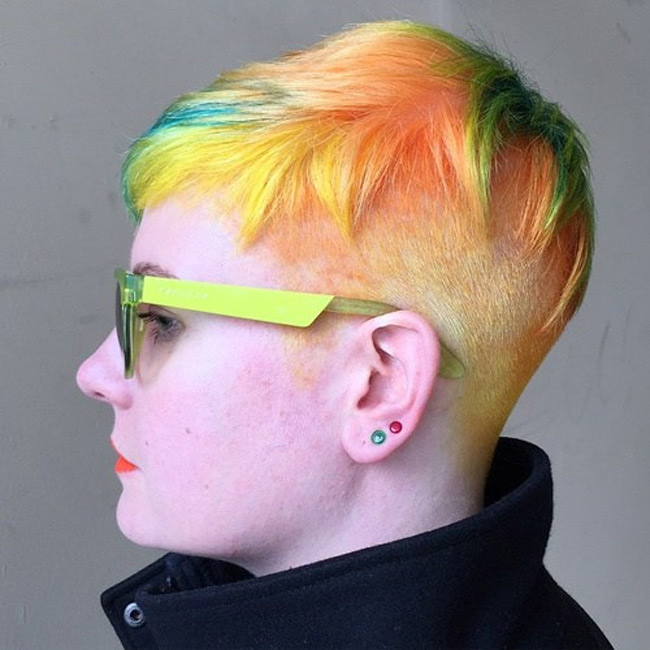 If the thought of a pixie cut brings up images of Anne Hathaway or Audrey Hepburn, it's time to revamp your notion of the classic style. High impact colors will take the look from sweet to sassy. For tips on how to style, try pairing it with neon Lucite sunglasses.