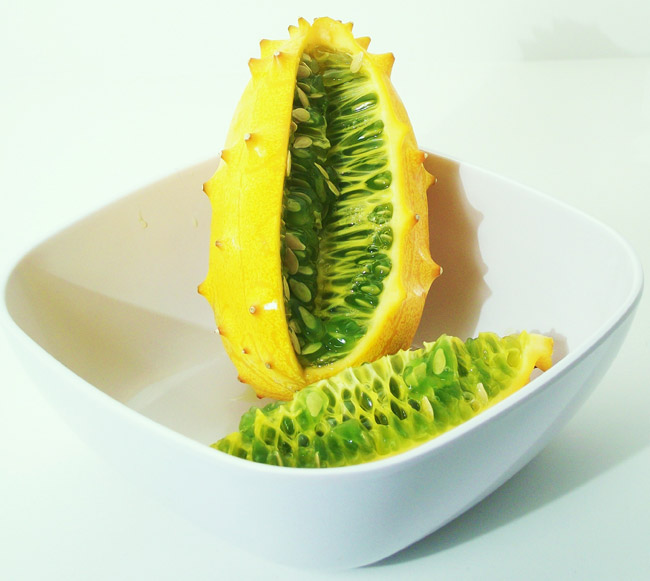 Cucumis metuliferus, horned melon or kiwano, also called African horned cucumber or melon, jelly melon, hedged gourd, or melano, is an annual vine in the cucumber and melon family. Often known by its nickname in the southeastern United States, blowfish fruit, it is grown for its fruit, which look like oval melons with horn-like spines. The fruit of this plant is edible, but it is used as often for decoration as for food. When ripe, it has a yellow-orange skin and a lime green, jelly-like flesh with a tart taste, and texture similar to a cucumber. The horned melon is native to Africa, and it is now grown in California, Mississippi, Chile, Australia, and New Zealand, as well.

In Zimbabwe, this cucumber is called gaka or gakachika, and it is primarily used as a fruit-snack, salad, and, rarely, for decoration. It is eaten young, mature green, or when ripe, bright yellow/orange (i.e., at any stage of its development). It grows naturally in the fields and also in the bush. However, some people leave some to rot in the fields for the next summer's seeds/plants. Its taste has been compared to a combination of cucumber and zucchini or a combination of banana, cucumber and lemon.

Some eat the peel, as well. The fibrous structure and protein composition of the peel provides for a taste and texture similar to the plantain family. One variety does not have horns, but looks and tastes similar. The seeds are covered in a gel-like substance. The skin is very rich in vitamin C and fiber. A small amount of salt or sugar can increase the flavor. The fruit can be used in cooking, but when eaten raw, most suck out the pulp and spit out the seeds.

A traditional food plant in Africa, this fruit has potential to improve nutrition, boost food security, foster rural development and support sustainable landcare. Along with the Gemsbok cucumber, it is the only source of water during the dry season in the Kalahari desert. Despite the fruit's colorful appearance, it has not found any significant uses in Western cuisine, and has been called "astringent", and the prices "exorbitant".


In terms of chemical makeup it is similar to others in the family Cucurbitaceae. Similar to very watered-down guanabana, because the tartness is very mild.

The health benefits of the kiwano are in the nutrients it contains. These nutrients are made up of good levels of vitamin C, iron and potassium. It also has smaller amounts of phosphorus, magnesium, zinc, calcium, copper and sodium. The seeds contain linoleic and oleic acid. Linoleic is an omega fatty acid which is required for human health while oleic acid is thought to help with the lowering of blood pressure.

There are two antioxidants which have been identified in the melon seeds and these are y-tocopherol and a- tocopherol. Both are organic types of vitamin E which have many health benefits. These types of health benefits of the kiwano means that many parts of the body benefit from, such as the red bloods cells, skin, muscles, nerves and heart. Vitamin E works in the body by helping to neutralize the damage from free radicals which can cause cancer and cardiovascular disease. It has been suggested that Vitamin E may be helpful in reducing the risk of Parkinson's and Alzheimer's disease.

Other health benefits of the kiwano are in the beta carotene or vitamin A contained in the pulp. Beta carotene is of importance to the immune system in helping to strengthen it. Vitamin A is also very good for the eyes and is important for night vision or being able to see in dim light, and it is important for skin health as well. Diets that are rich in beta carotene, lutein and lycoprene are said to help slow aging and may also protect and repair DNA.

A couple of the anti-oxidants recognized in horned melon seeds usually are a-tocopherol as well as y-tocopherol. Both of them are organic types of vitamin E. Vitamin E has several health advantages which includes healthy skin, heart, muscles, nerves, and red blood cells. Vitamin E likewise helps counteract harmful free-radicals that can induce long-term illnesses just like heart problems as well as cancer. Additionally there is several proof to point out that vitamin E may help decrease our chance of Alzheimer's as well as Parkinson's disease.

The yellowish-green colored pigment perfectly located at the seeds and also pulp of horned melon include the carotenoid, beta carotene, popularly known as vitamin A. Beta carotene assists strengthen the body's defense mechanisms and sustain eye and skin health. It may also help cancer prevention simply by suppressing the grow of free-radicals. A diet abundant with vegetables and fruit which contain carotenoids just like beta carotone, lycopene and lutein may also assist repair as well as safeguard DNA, therefore decreasing the ageing procedure. 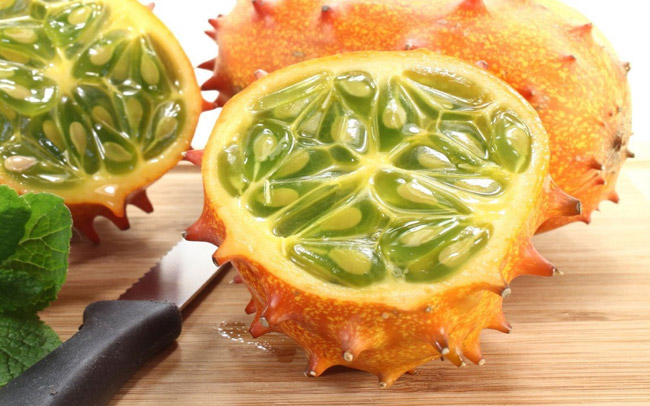 A kiwano consists of 307 IU of vitamin A, or even 6 % of the 5,000 IU suggested every day. Vitamin A is a vital nutrient for the assistance of the retina function within the eye which retains eyesight. Vitamin A additionally fortifies the strength of the mucosal lining, the very first line of protection from infection within the nasal passages, throat and also intestinal tract.

A kiwano offers 1 mg of zinc, or 7 % of the 15 mg required every day. On average, most Americans usually do not eat the minimal every day requirement of zinc, in accordance with Ohio State University. Which includes zinc sources within the diet is essential mainly because it plays a role in the development of protein, that repairs wounds and also produces blood cells. Zinc additionally takes part in the function along with discharge of insulin essential for normal carbohydrate metabolism.

A kiwano offers 11 mg of vitamin C, or 18 % of the FDA suggested Daily Value of 60 mg. Including concentrated sources of vitamin C within the diet is essential because the nutrient is required for the function of numerous body systems. Vitamin C is essential for the generation of collagen, an element of skin tissue utilized for making as well as repairing epidermal as well as organ tissues. Additionally, it safeguards cells from injury brought on by free-radicals and harmful toxins, waste by-products of metabolism, that may result in the growth and development of disease and result in untimely aging.

These types of fruits are lower in calories, loaded with dietary fiber, vitamin A, vitamin C, calcium as well as iron.

This fruit could be kept in room temperature for a minimum of 2 months. This is often a primary reason for utilizing these unusual looking fruits for ornamental purposes. Horned Melons have little horns growing out from bright yellow skin along with some orange on it . They're about Three to five inches lengthy (7.5 to 13 cm) and average 2 inches wide (5 cm.) They'll weigh between 1 to 2 pounds (1/2 a kilo to a kilo.)

Inside, the flesh appears like lime-green jelly, and it has a rather grassy smell into it.This can be a challenging melon. Unless there's two types floating around, then it seems that in consuming this melon two genetically various taste bud genes are rising in humans.

Several food writers state the seeds are delicious, and that the fantastic sweet and also sour taste is actually a complicated mixture of banana, cucumber, lime, mango pineapple and watermelon tastes. To others, the seeds are formally delicious, however they are as appealing since the tough, bitter as well as stringy seeds present in a cucumber which is past it.