What is Multiple sclerosis? 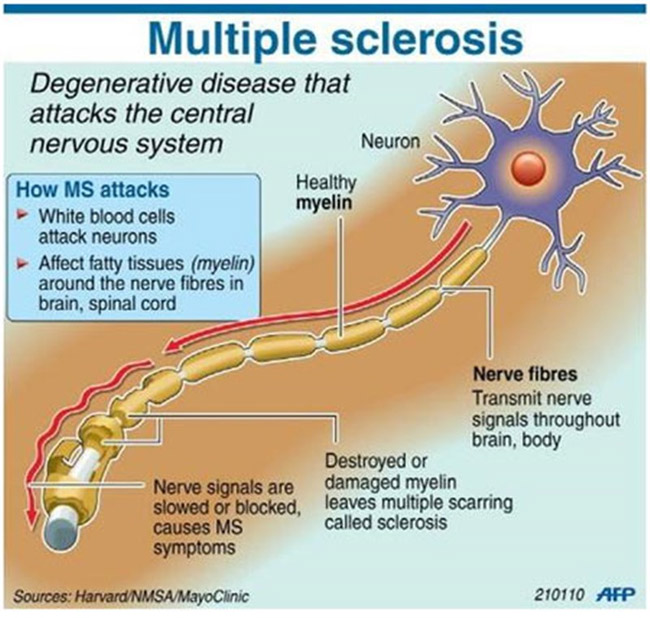 Multiple sclerosis (MS) is the most common nervous system disorder affecting young adults. In this condition, nerves in the brain and spinal cord are progressively damaged, causing a wide range of symptoms that affect sensation, movement, body functions, and balance.  Specific symptoms may relate to the particular areas that are damaged and vary in severity between individuals.  For example, damage to the optic nerve may cause blurred vision.  If nerve fibres in the spinal cord are affected, it may cause weakness and heaviness in the legs or arms.  Damage to nerves in the brain stem, the area of the brain that connects to the spinal cord, may affect balance.

In many people with MS, symptoms occur intermittently and there may be long periods of remission. However, some people have chronic (long-term) symptoms that gradually get worse.

WHAT ARE THE TYPES ?

There are different types of MS.

Symptoms may occur singly in the initial stages and in combination as the disorder progresses.  They may include : 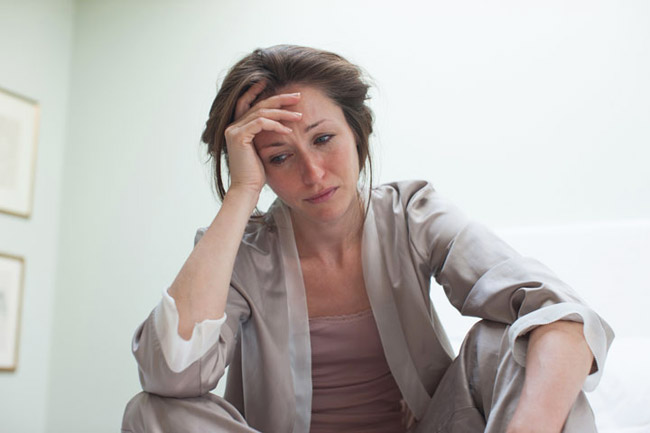 Though these are a few of the symptoms commonly associated with MS, not all people with MS will experience all of them. Most will experience more than one symptom, however. There is no typical case of MS. Each is unique.

Scientific research seems to show that the causal factors of immunological, environmental, genetic, and viral, in various combinations, are the most likely reason for MS.

Immunology
MS is an autoimmune disorder, in which the body's immune system attacks its own tissues, in this case those of the nervous system.  Many nerves in the brain and spinal cord are covered by a protective insulating sheath of material called myelin.  In MS, small areas of myelin are damaged, leaving holes in the sheath, a process known as demyelination.  Once the myelin sheath has been damaged, impulses cannot be conducted normally along nerves to and from the brain and spinal cord.  At first, the damage may be limited to only one nerve, but myelin covering other nerves may become damaged over time.  Eventually, damaged patches of myelin insulation are replaced by scar tissue.

Environment
The geographic location of a young person can be a significant factor (2X) in the probability of MS occurring. An unusual characteristic of MS worldwide is that it occurs in the general population at roughly twice the rate for those living above approximately the 40 latitude than for those living below the 40 latitude.

Genetics
MS is not a hereditary disease; however, the genetic component, or marker, for people who are predisposed to develop MS can be shown, and some probabilities can be calculated. The exact mechanism of action that causes this genetic marker to increase the probability that the myelin of a patient will be sensitive to attack by immune system cells is not known. Scientists believe that certain "unlucky" combinations of genes may significantly increase a person's chance of developing MS. Genetic factors that are common among immediate family members such as parents, brothers, or sisters can increase the risk of developing MS by severalfold.

Viruses
Some viruses are known to cause demyelination and inflammation, so the possibility that a viral factor is a trigger in the development of MS is considered by some researchers to be significant.


HOW IS IT DIAGNOSED ?


Doctors use two basic rules to determine if a patient has MS:

Medical History:
Clinical examination  includes a detailed review of the five senses, mental and cognitive function, language and speech function, family history, sex, emotional factors, geographic data, and the age when the symptoms first appeared. The medical history of MS patients should include information on the following: date and type of symptoms, medications, allergies, history of surgery or trauma, family history (MS positive), sexual function, bowel and bladder habits, exposure to environmental hazards such as chemicals, and foreign travel with the possibility of exposure to exotic diseases.

Neurological Examination:
If you are having visual problems, such as blurred vision, you may be referred to an ophthalmologist, who will assess the optic nerve for optic neuritis, which is commonly affected in the early stages of the disorder.

Evoked potential testing is electrical diagnostic testing used to determine if there is a slowing of message transmission in various parts of the brain. These tests can often pinpoint nerve sheath (myelin) scarring not found in neurological examination. Normally, the Brain's reaction to such stimuli is almost instantaneous. DeMyelination or a Lesion in the Nerve Pathway cause a conduction delay and the response time will be much slower than normal (Longer Latency Time).

You will probably also have an imaging test of the brain, such as MRI , to see if there are areas of demyelination. MRI testing can be used to track and predict the progression of MS once the presence of the disease has been detected. MRI testing is a sophisticated enough neuropsychologic tool to detect demyelination that is associated with cognitive function. Bear in mind that a normal MRI does not ensure that a person does not have MS. About five percent of MS patients have normal MRIs, according to the National Multiple Sclerosis Society.

Your doctor may arrange for a lumbar puncture (Spinal Tap),  a procedure in which a small amount of the fluid that surrounds the spinal cord is removed for microscopic analysis.  Abnormalities in this fluid may confirm the diagnosis. 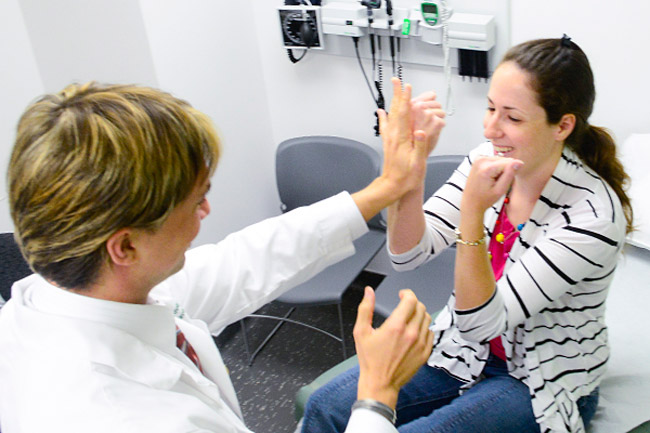 There is no cure for MS, but if  you have relapsing-remitting MS, interferon beta  may help to lengthen remission periods and shorten the length of attacks.  Your doctor may also prescribe corticosteroids  to shorten the duration of relapse.  However, at present, there is no specific treatment to halt the progression of chronic-progressive MS. The "ABC drugs (Avonex ,Betaseron and Copaxone)," have revolutionized the way relapsing-remitting MS is treated. The ABC drugs do not stop MS entirely or cure it, but they do reduce the frequency and intensity of attacks and slow the progress of damage.

Most recently (March 2002), the U.S. Food and Drug Administration (FDA) approved a third form of interferon called Rebif. Like the ABC drugs, it is indicated for the treatment of patients with relapsing forms of MS to decrease the frequency of clinical exacerbations and delay the accumulation of physical disability. Like Avonex, Rebif is the beta-1a form of the human protein interferon. Additional information about Rebif is available from the manufacturer's Web site: http://www.rebif.com .

Many of the more common symptoms that occur in all types of MS can be relieved by drugs.  For example, your doctor may treat muscle spasms with a muscle relaxant. For example, baclofen (Lioresal) and tizanidine (Zanaflex) are antispasticity medications often prescribed to relieve muscle spasms, cramping, and tightness of muscles in MS patients. Each has varying side effects in varying degrees; however, your health care professional should be able to find one that provides comfort and relief for almost any symptom you have.

Similarly, incontinence can often be improved by drugs that affect bladder control. Although currently unapproved by the FDA for MS patients, a growing number of health care providers now consider use of the botulinum toxin Botox as an effective short-term treatment option for certain types of MS-related problems, such as muscle stiffness and urinary problems, when first-line treatment is ineffective.

Problems in getting an erection may be helped by a drug treatment such as sildenafil.

If you have mobility problems, your doctor may arrange for you to have physiotherapy. Physical therapy usually focuses on walking (including using ambulatory aids correctly), balance and stability in standing, maintaining range of motion and functional strengthening.

Occupational therapy may make day-to-day activities easier. Some programs also include techniques to improve memory and concentration. The American Occupational Therapy Association (AOTA) and the American Physical Therapy Association (APTA) provide referrals to specialists and information on MS-related issues as well as other conditions. Visit their Web sites for more information: http://www.aota.org and http://www.apta.org.

Lifestyle Modifications
If you are diagnosed with MS, you and your family will need time and possibly counseling  to come to terms with the disorder.

Things you can do at home to manage fatigue and/or limited mobility include:

* Simplifying tasks like cooking so they are less stressful - for example, cook more frozen vegetables, or freeze individual servings of a meal, so you can give yourself time off from meal preparation.

* Making tasks less fatiguing - for example, put a table and chair in the kitchen so you can sit while cutting or stirring.

* Identifying and abiding by your priorities. If it's important for you to continue working, take some shortcuts with household tasks, or eliminate some of them.

No matter how much you exercise, how healthful your diet is or how well you take care of yourself, there is no way to prevent multiple sclerosis (MS). It affects people randomly. But it also is somewhat manageable. If detected early, new medications (see discussion of the "ABC" drugs" in the Treatment section at this site) may slow the progress of the disease and the severity of symptoms.