From women running to DC for Planned Parenthood to a teenager putting together screenings of Hidden Figures for thousands, to Oklahoma’s first Beauty College at Mabel Bassett Correctional Center where licensed master Instructors volunteer to teach female inmates a vocational skill in cosmetology, women have been a force this year. 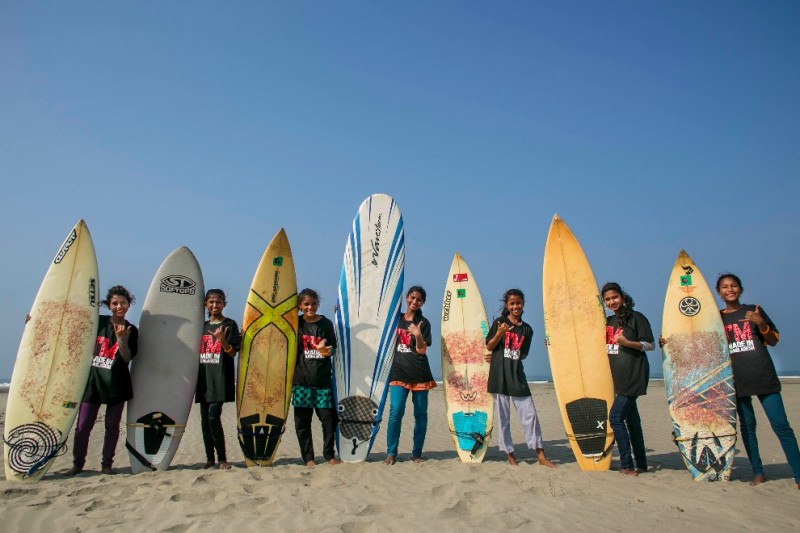 GoFundMe has seen a massive uptick in women fighting for various causes, as has seen millions of dollars donated in support.

Give these girls time to develop their dreams, to learn, to play.

The Bangladeshi surf girls are a group of eight outgoing and spunky girls ranging in age from ten to thirteen years old living and working in Cox’s Bazar. Poverty is forcing them into an early adulthood, as they are obligated to shoulder the responsibility of earning money to help feed their families. Early each morning, rain or shine, they leave their homes, some of which are perched on the side of steep inclines, and make their way to the beach where they work selling jewelry and eggs until late into the night before returning home. Their families are unable survive without the girls’ income.

Bangladesh has the second highest rate of child marriage in the world. Outside of the relatively progressive cities, girls are married off as young as 9 years old because they are seen as a burden for their families. The view is that men can earn a wage, but that women cannot. Girls older than 20 are considered old maids, unfit for marriage, which is generally a girl’s only realistic aspiration. Women and girls are harassed in the street. There have been cases of acid attacks against girls resulting from spurned marriage proposals or dowry disputes. Dozens of women and girls commit suicide each year because they are sexually harassed, which is infuriatingly referred to as “eve-teasing”.

As the surf girls are getting “older”, men frequently harass them on the street or on the beach while they work. Their parents have been pushing them to wed, or get more “appropriate” work as domestic workers, which can put them in an unsafe environment.

In a conservative Muslim country it is uncommon to see these very vivacious, spirited, confident girls learning to surf and skateboard. They know that there is an alternative to the patriarchal, conservative lifestyle that they see imposed on women around them in their villages and communities. They’re up against so much, but rather than despair, they have dreams. The Surfer Girls all want something good for their lives; safe, stable and dignified jobs, an education, and the ability to choose to delay marriage until they are adults. One aspires to be a doctor, others dream of being professional surfers, and still others plan to work as lifeguards on the beach.

For the cost of only $50 per month, each girl will be guaranteed one healthy meal per day and safe transportation to and from work.

Even the smallest amount will make a tangible difference in their lives.

Give them a chance to learn how to be themselves before they are forced to become someone’s wife or mother.  With knowledge and confidence these girls have the strength to forge their own path. They will be the ones who have the power to begin to change the face of a society that is very cruel to young girls and women. This money will take the pressure off the girls and their families. All they need is a chance to breathe.