Most colon and rectal cancers begin as small, noncancerous (benign) clumps of cells called adenomatous polyps. Over time some of these polyps become cancerous.

The colon is the first 6 feet of the large intestine. It has four sections:

There are several causes for colorectal cancer as well as factors that place certain individuals at increased risk for the disease. There are known genetic and environmental factors.

People at risk for colorectal cancer:

Having certain diseases or conditions may place people at increased risk for colorectal cancer. These include

The symptoms of colorectal cancer can be confused with those of a number of digestive disorders. Having one or more of these symptoms does not mean you have cancer

The following are the most common symptoms of colorectal cancer. However, each individual may experience symptoms differently.

Women who have any of the following symptoms should check with their physicians, especially if they are over 40 years old or have a personal or family history of the disease:

The symptoms of colorectal cancer may resemble other conditions, such as infections, hemorrhoids, and inflammatory bowel disease. It is also possible to have colon cancer and not have any symptoms. Always consult your physician for a diagnosis.

Most colon cancers develop from polyps. Screening is extremely important for detecting polyps before they become cancerous. It can also help find colorectal cancer in its early stages when you have a good chance for recovery.

The doctor performs a thorough clinical evaluation that includes:

Common screening and diagnostic procedures include the following:

Another new test checks a stool sample for DNA from abnormal cells. In preliminary studies, the test has proved to be so accurate it may eventually eliminate the need for more-invasive examinations such as colonoscopy, at least in average-risk circumstances. A three-year clinical trial of this test by the National Cancer Institute is under way.

Staging is the process of finding out how far the cancer has spread. This is very important because your treatment and the outlook for your recovery depend on the stage of your cancer. For early cancer, surgery may be all that is needed. For more advanced cancer, other treatments such as chemotherapy or radiation therapy may be used. 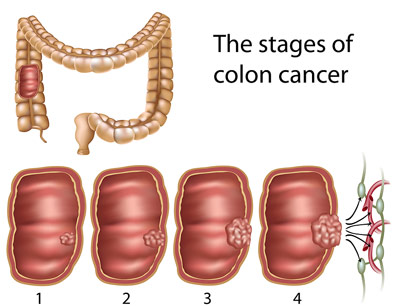 Stage 0
For cancers that are stage 0, the disease has not grown beyond the lining of the colon or rectum. Therefore surgical removal or destruction of the cancer is all that is needed. For larger tumors, a rectal or colon resection may be required.

Stage 1
For colon cancer, Stage 1 cancers have grown through several layers of the colon but have not spread outside the colon itself. Standard treatment is a colon resection with no other treatment generally needed.

Like colon cancer, Stage 1 rectal cancers have grown through numerous layers of tissue but not outside the rectum. The type of surgery used to treat this is dependant upon the location of the cancer, but the primary treatment is an abdominoperineal resection. Chemotherapy and radiation are sometimes administered before or after surgery.

Stage 2
Stage 2 colon cancer has penetrated the wall of the colon and spread into nearby tissue. However, it has not yet reached the lymph nodes. Usually the only treatment for this stage is a resection. Since some Stage 2 colon cancers have a tendency to recur, the doctor may also decide to treat the patient with chemotherapy or radiation therapy.

Once rectal cancer has reached Stage 2, it too has penetrated the walls of the rectum but has not yet reached the lymph nodes. It is generally treated with a resection and then both chemotherapy and radiation therapy.

Stage 3
Stage 3 is considered an advanced stage of colorectal cancer. The disease has spread to the lymph nodes, but not to other parts or organs in the body. For both colon and rectal cancer, sectional surgery is done first and is followed by chemotherapy and radiation therapy.

Stage 4
For patients with Stage 4 colorectal cancer, the disease has spread to distant organs such as the liver, lungs and ovaries. When the cancer has reached this stage, surgery is generally aimed at relieving or preventing complications as opposed to curing the patient of the disease. Occasionally the cancer’s spread is restricted enough to where it can all be removed by surgery. For Stage 4 cancer that cannot be surgically removed, chemotherapy, radiation therapy or both may be used to alleviate, delay or prevent symptoms

Specific treatment for colorectal cancer will be determined by your physician based on:

Treatment choices for the person with colon cancer depend on the stage of the tumor – if it has spread and how far. When the disease has been found and staged, your physician will suggest a treatment plan. Treatment may include: