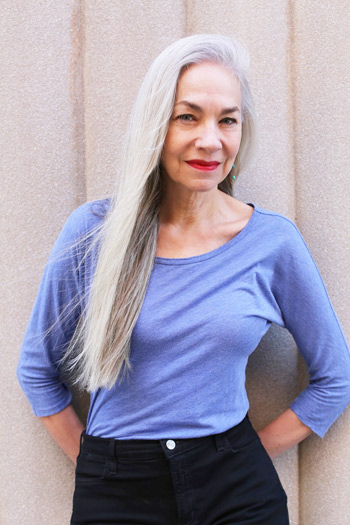 O’Shaughnessy used to be an actor, and had only just moved back to New York from Los Angeles when she struck up a conversation with the woman sitting next to her in a Greenwich Village restaurant. Her neighbour turned out to work for American Apparel, and she was invited to do a shoot. The first set of images included one of her sitting, fully clothed, with her legs wide open. “A morning talk show said it was distasteful to see a woman my age – I loved this! – in that position. Here, I thought, was rampant ageism.” At the same time, O’Shaughnessy has found herself enthusiastically liked on Facebook, mainly by young women who find her inspirational. “A lot of them said, ‘I want to look like her when I get older’, and were encouraged that things don’t have to be a downhill slide.”

American Apparel’s new lingerie ad has stirred up controversy for bringing “sexy back” in a whole new way: a 62-year-old grey-haired model posing in a blue lace bra and red panties. With the tagline, “Sexy has no expiration date,” model Jacky O’Shaughnessy strikes a relaxed pose sitting in an empty white room with red stained lipstick on her lips and flowing grey hair.

“I was game the whole time,” O’Shaughnessy said of the latest campaign shots. “I’m comfortable. I don’t feel that any of this is inappropriate. When people talk about age appropriate hairstyles, and age appropriate dressing, well, whose age? And who are you?” Her couldn’t-care-less attitude comes across in the photos. It’s a kind of confidence that only comes with age. “When I was handed the lace underwear, it was like, yeah, sure, let me have it,” O’Shaughnessy said. “Want me to sit on this stool? Fine. Legs in the air? Great, lets go.” She admits that it wasn’t always that easy to say “let’s go” though. “Like anyone, I have had aspects of my body that I have been not pleased with since I was 13,” O’Shaughnessy admits. “When I grew up, the models of my day were Veruschka, Twiggy, and I remember very clearly a shot of Diana Ross and she was in a pair of jeans and a white t-shirt and she was absolutely skeletal. And I remember thinking ‘Oh, I want to look like that, I don’t want an ounce of fat on my body.'” 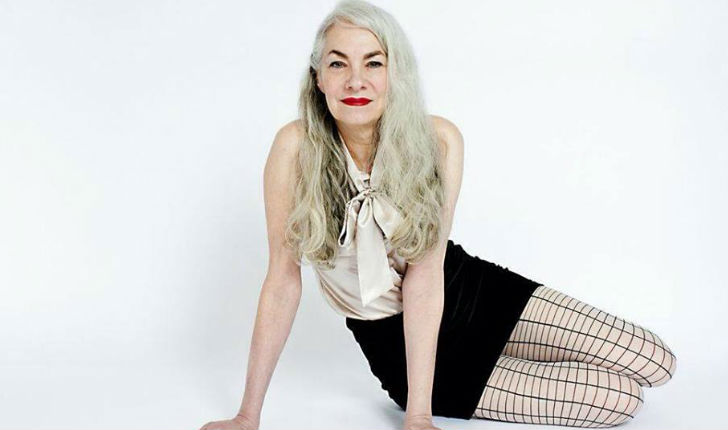 At some point, O’Shaughnessy says she just made “a conscious choice” not to accept certain limitations and stereotypes that are attached to women of a certain age. “At one point I just didn’t feel like cutting my hair anymore,” she said. “I thought, why?”

O’Shaughnessy has been modeling for American Apparel for the past year and a half (American Apparel’s creative director Marsha Brady spotted her in an NYC restaurant), but her latest lingerie shots riled up the Internet.

“I think blogging is a format for a lot of people who just love to get on and just rip things apart,” O’Shaughnessy said. “When I look at the most critical, it’s very young women, not guys, yet very young women are also some of the biggest proponents. The amount of negativity is so small compared to the positive reactions.” And it’s true: a quick scan of the comments under O’Shaughnessy’s photo on American Apparel’s Facebook page are overwhelmingly positive: “This rocks,” “This lady is flipping beautiful!!!,” and “Bravo!!! Much more gorgeous than their other models.” In this case, we find ourselves agreeing with the commenters.

About doing What’s Underneath, 62-year-old new-to-modeling Jacky O’Shaughnessy said, “It’s time to take the jacket off of the book and get to the essence. There’s an epidemic of poor body image for women, especially at my age.” You may have seen Jacky in her sexier-than-any-20-something-model American Apparel ads, but what you may not be aware of is the heart-wrenching lifetime of struggle she has had with self-acceptance that finally brought her to where she is today. Six feet tall by high school, Jacky couldn’t find anything that fit her except for men’s L.L. Bean, and it wasn’t an Annie Hall fantasy, she admits.

By 23, she was hiding herself in muumuus, and each time she tried to shed the layers, out came the harsh criticisms regarding cellulite, fat ankles or any other number of taunts from men — a very sad commentary on the brainwashing of the ideal of what a beautiful woman is. One boyfriend even told her that she was too old to be seen in public with. We love the moment in Jacky’s video when she decided to finally release herself from the Dr. Kildare rubber gloves and let her drop-dead silver hair reign. “Learning to love myself was very hard; it took intention and practice,” she confesses. And it wasn’t until the actual day of shooting her American Apparel ad, after being discovered by them on the street, that Jacky was finally able to take a giant step into her powerfully gorgeous, status-quo busting shoes. “For the first time, I am good this way,” she states.