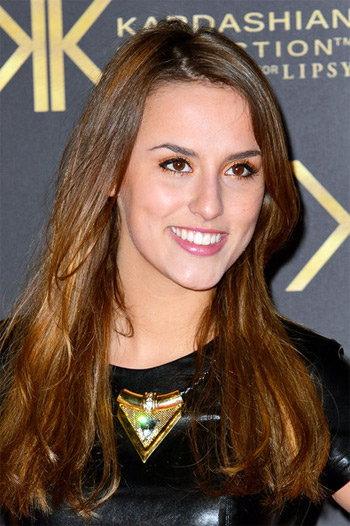 Lucy Watson first appeared on Made In Chelsea in 2012 and has starred in the reality TV show ever since. The socialite also runs her own jewellery business: Creature Jewellery. She was featured on cover page of FHM Magazine May 2014.

She burst onto our television screens in 2012 and has firmly set herself as one of the lead characters in the hit E4 show, Made in Chelsea. Lucy has played a central role in major story lines and is a regular face in a number of popular magazines and chat shows. Lucy’s fabulous face and figure have lead her to model for several well known fashion brands and she also has her own jewellery brand. Lucy Watson’s official 2015 calendar is the perfect gift for Made in Chelsea fans everywhere and features Lucy in 12 different shots for every month of the year. Lucy has authentically hand signed the front cover of every single one of her calendar’s.

Watson started her own jewellery line, toting garish fang and claw-shaped bracelets and necklaces. “It’s called The Creature” . She has modelled for various women’s magazines, and British labels Vesper and Gorgeous Couture. She is currently the face of Lipsy dresses. She has launched her book The Dating Game, where she reveals her experiences of serial cheaters, public betrayals and scandals which have taught her exactly how to delete an ex, how to try guys on for size and work out if they fit her and not the other way round!

Lucy Watson is UK’s most stunning celebrity. She is one of the lead characters in the hit E4 show, Made in Chelsea. She is in conversation with Namita Nayyar, President Women Fitness.

Ms. Namita Nayyar: You must have started your career in modelling at an early age. You burst onto the television screens in 2012 and has firmly set yourself as one of the lead characters in the hit E4 show, Made in Chelsea. You have played a central role in major story lines and is a regular face in a number of popular magazines and chat shows. This propelled your modelling career to the height where you have been at the top of the world of fashion and glamour modeling and has also was being featured as cover model for the FHM Magazine May 2014 Issue. Tell us something about this fairy tale journey?

Ms. Lucy Watson: It’s been amazing. I have always wanted to model and be on TV so it really has been a dream come true and I feel blessed everyday. I’ve become aware of so many more opportunities and I’m just keen to explore all of them, and learn as I go.