Natalie Burn is an exceptionally talented and accomplished actress. She has done a popular role in recent movie as Kristina, Conrad’s (Mel Gibson) wife in “The Expendables 3” sequel. 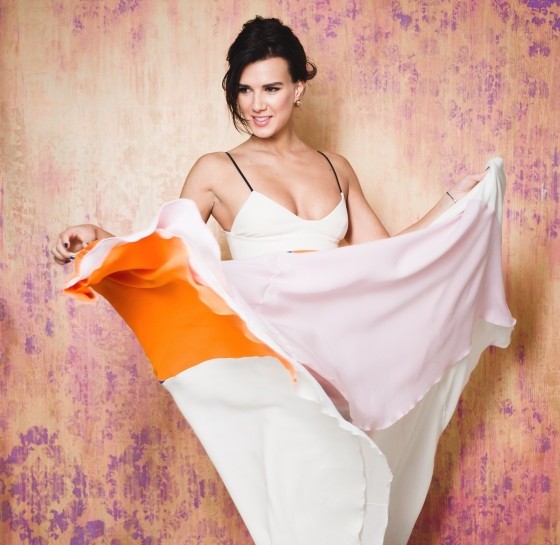 Natalie Burn was born in Kiev, Ukraine Natalie was growing in the family of businessman and ballerina. Being a dancer her Mum noticed that Natalie at early age had wrong posture and sent 4 years old Natalie to do gymnastics, mainly for correcting posture and developing flexibility. Later at the age of 6 to improve her movements and sense of rhythm Natalie was admitted to Ukrainian Dance Academy where besides learning academic subjects, she studied classical ballet, folk and tap dance. From the age of 8 Natalie was already touring extensively performing within the youth dance group.

Those years of everyday training at school, summer camps and long hours rehearsals on the stage before performances and tours put a strong foundation of Natalie’s character for the rest of her life. Trying to be competitive, and simply the best Natalie had to work hard. As a result of that hard work at the age of 11 she was accepted in one of the top ballet school in the world Bolshoi Ballet School in Moscow, which made her family to move to Russia.

Several years of serious ballet training, touring with Bolshoi Ballet and performing on the best stages all over the world sculptured a determined and ambitious ballerina with classical ballet discipline and understanding of dance, music and stage. However, at her teens Natalie heard of Bejaur Ballet and some ballet extravaganza in Paris and London. She became keen on experiencing a new form Contemporary style of ballet, which was not popular in Russia at that time.

Moving to London, gave Natalie a chance to complete her classical ballet education in The Royal Ballet School as ballet dancer and choreographer. Besides, she learnt contemporary style of ballet in Rambert Ballet and Contemporary Dance Company in London. Being asked to choreograph for different occasions and different audience, Natalie had to learn other dance types as Spanish Flamenco in Seville, hip hop in US, Salsa and even break dancing in the UK.

Inspired by variety of dance styles, Natalie choreographed ‘The Refugees’ dance piece on the music from “Notre Dame De Paris” and won special award in the Royal Ballet School as young talented choreographer. Introducing herself further as choreographer Natalie created full ballet for special event in UNESCO, Paris, which many celebrities attended as Pierre Carden, Mirrey Matiew, Michelle Rodriguez and also astronauts from different countries as special guests. The ballet was dedicated to the first man mission into the space, it was shown in UNESCO on the day of its 50th anniversary, and had a great success.

Continuing her career as choreographer Natalie created another big ballet called “Stella”, which was presented in Kremlin Palace Hall in Moscow. “Stella” was performed in support of a humanitarian act of raising awareness of people’s impact on the environment, and urgency of combining people’s efforts to protect our planet from environmental disaster.

Owen Wilson specially came to Moscow to support Natalie at the premier of “Stella.” Having several injuries stopped Natalie from making career as a professional ballerina, but passion for dance and stage had to find its application in choreographic work, including music industry with such names as Nelly, Paula Abdul, Mario, the Jackson Five, Craig David and choreography of top fashion events like Roberto Cavalli and big music festivals all around the world.

Stage and audience for Natalie had always been a significant part of her life. However, since childhood her biggest dream was expressing herself with her voice, not only movements, being able to act, to reincarnate into different characters and show herself as dramatic actress. Natalie was admitted as a student into a world famous Lee Strasberg Theater Institute, later American Academy of Dramatic Arts and later got into study at the Actor’s Studio in West Hollywood. Her dream was turning into reality when after winning the approval of both Martin Landau and Mark Rydell she appeared on stage of Actor’s Studio in several amazing stage plays. Some of Natalie’s work at the studio was moderated and commented by Al Pacino.

Among all the theatre roles played, her favorite role remains Nina from Seagul, A.Chekhov’s play which was very much appreciated and highly impressed Sally Kirkland, Martin Landau, Mark Rydell and many others at the Actors Studio. Acting on the stage for Natalie was comfortable as dancing on it, feeling reaction of the audience and having live connection with people was always giving boost to perform better, showing your best.

Trying herself as a movie actress Natalie started with the small roles. Gradually growing, Natalie appeared in more than 10 Hollywood movies. Thanks to Natalie’s international background and multilingual ability (she speaks five languages), Natalie got offers to act in the movies produced in different countries.

In Russia Natalie is famous to domestic audience primarily for her lead role in the sequel of the famous gangster saga “Brigade” – “Brigade: The Heir”, released in 2012. Natalie also played as a guest star in the detective TV show “Petrovich” (NTV), together with Alexei Petrenko and Marina Golub, and starred in action comedy “Man are the Bait/ Chelovek Primanka” (directed by Guzel Kireyeva) with Russian actors Tatiana Vasilieva and Sergey Averin. (TV series released in 2014)

Also taking part in talk shows Natalie could be seen with Rob Schneider in Moscow participating in the debates on one of the TV talk show. In US cinematography Natalie was blessed to work with such legends as Franco Nero, Harrison Ford Sylvester Stallone, Jason Statham, Arnold Schwarzenegger, Kellan Lutz, Antonio Banderas, Dolph Lundgren, Wesley Snipes, Mel Gibson, and many more…

Her most popular appearance is in action and horror movies, however she loves to play in drama movies and would like to try herself in comedy. Among her latest movies are: thriller/horror “Nymph”, first showed on screen at Cannes Film Festival 2014, where Natalie played a lead role. Movie premiere took place on March 8, 2014 at Belgrade Film festival. Franco Nero played as one of the lead stars. The movie recently won audience award as the best film in Zagreb Film Festival.

Another film had enormous presentation at Cannes Film Festival 2014 was action thriller “The Expendables 3” sequel. Natalie played Kristina, Conrad’s (Mel Gibson) wife. This unforgettable experience of being surrounded by top actors and seeing them in working process, inspired Natalie to get herself on the ladder of producing films.

Natalie learnt Producing in UCLA. Today Natalie is actively engaged in producing independent movies with her company 7Heaven Productions. In the first project called “Fallen Angel”, Natalie played heroin addict, who betrayed her own dream of becoming a composer over heroin addiction.

This short film won The Merit Award for the outstanding work of female filmmaker. After Natalie’s and 7Heaven Production produced movie is Film “Awaken” , which is currently in post-production (will be released in October 2014) Story written by Natalie Burn reflects a global problem over human trafficking for the organ trade.

In Awaken the group of people get thrown on a tropical Island, where criminal gangs operate supplying fresh human organs to the rich clients. Leading stars are: Daryl Hannah, Edward Furlong, Vinnie Jones, Robert Davi, David Keith, Michael Pare, Jason London and Natalie. Thanks to Natalie’s background and professional coaching of the best stunt coordinators, all the fighting scenes in the movie Natalie was able to perform herself. Newly coming project of 7Heaven Productions is “Devil’s Hope” film.

Story by Natalie Burn, written by Morgan Land (Iceman) Currently in Pre-Production aimed to be shot in October 2014. Natalie plays the Lead. It’s a dark thriller ( Film Noir) film set in the backstreets of New Orleans. Drugs, sex, voodoo, addictions, dirty politicians are the theme of the movie. Natalie’s future projects include “Choices”, film showing problems met by people with disabilities and how a choice can turn life to completely different direction.