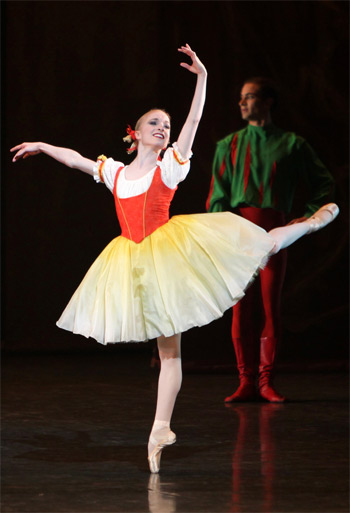 “Shelby Elsbree is an extraordinary person to have in the studio,” says assistant artistic director Russell Kaiser, who first worked with Elsbree when she was a student at the School of American Ballet. “She’s always aware, always alive, always present in the moment. She isn’t afraid to make mistakes.” Now, after performing for four years with the Royal Danish Ballet, Elsbree is back in the US and eager to fit into the range of choreography at Boston Ballet.

Elsbree at 9 years of age earned a black belt in tae kwon do and competed on her local gymnastics team in her hometown of Sarasota, Florida. When a broken arm forced her to take a hiatus, she tried ballet and fell in love full-force. At 13, she attended School of American Ballet’s summer intensive, and was asked to continue as a year-round student.

Elsbree became one of four students on whom Peter Martins choreographed part of the role of Juliet in his 2007 production of the ballet.

Throughout her SAB training, Elsbree dreamed of joining New York City Ballet. But in the fall of 2008, NYCB was forced to cut back on company contracts, and students were encouraged to audition elsewhere. Elsbree quickly set her sights on Europe and planned an audition tour. Eight days, five countries, five companies, and four job offers later, she signed on with the Royal Danish Ballet. “It was obviously out of my comfort zone,” she says. “But there were a lot of connections between Copenhagen and New York. Royal Danish’s artistic director Nicolaj Hübbe was a principal with New York City Ballet for 20 years; and Nicolaj was bringing over all of this Balanchine and Robbins repertoire that felt like home to me.” “She’s always aware, always alive, always present in the moment.” —Russel Kaiser.

Within six months of joining the company, she was performing soloist and principal roles. They included Blue Girl in Jerome Robbins’ Dances at a Gathering, The Pupil in Flemming Flindt’s The Lesson, and the title character in Alexei Ratmansky’s The Golden Cockerel, a strong, lively role that seems to reflect Elsbree’s inner spirit. The Royal Danish also sends its youngest company members to summer intensives around the world, and during one of her first summers Hübbe sent Elsbree to Boston Ballet, where she became intrigued with the company’s diverse repertoire.

By Elsbree’s fourth season with the Royal Danish, she found herself battling homesickness for the first time in her life. “I was so thirsty for that familiarity and that closeness of family and friends,” she says. She also felt ready for a more diverse repertoire. In December of 2012, she flew to Boston for two days and took class on the Boston Opera House stage as the company warmed up for the Nutcracker. Nissinen offered her a corps contract and asked his friend Hübbe how soon the Royal Danish could spare her.

By March, less than two weeks after leaving Denmark, Elsbree was onstage with Boston Ballet in Sleeping Beauty. “She jumped full-speed into so many things—it was baptism by fire,” says Nissinen. ”I’ve seen that she can perform under pressure. And that she is a great spirit: very positive.” During her time in Denmark, a burgeoning interest in food photography quickly became Elsbree’s blog, “Tutus & Tea,” in which she chronicled her adventures abroad, in and out of the kitchen.

The blogger community in Boston took her inspiration for “Tutus & Tea” in a new direction. She hopes to use it to promote healthy views of food as fuel, both for young dancers and for non-dancers who believe that dancers don’t eat. “Of course we eat and are interested in food,” she says, “because we’re athletes just as much as the football player and the ice hockey player next to us.” After her performing career, Elsbree plans to enter food-styling full-time, and dreams of attending Le Cordon Bleu in Paris. But for now, she has ground to cover on the Boston stage. “I have very high expectations for Shelby,” says Kaiser. “Dancing with the Royal Danish gave her a history. Now, she has a mature nuance and is able to adapt to the many styles required in dance today. She is perfectly poised to thrive in our repertoire.” Repertoire.