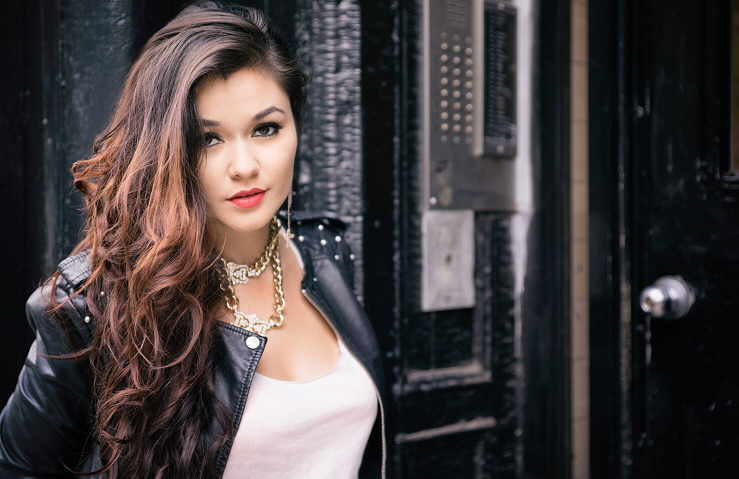 Stef Lang is a Canadian singer, songwriter, producer and performer who resides in Vancouver, BC. Known for her engaging performances and edgy lyrics, Lang released her first commercially produced full-length album, The Underdog, in May 2010, distributed by Hipjoint Music/Universal Music Canada and available on iTunes worldwide.

Her hit single, Mr. Immature, was released two months before the album and achieved mainstream success when it peaked at #5 on The Billboard Chart for Canadian Emerging Artists. Her single, Paper Doll, was released to radio stations nationwide in February 2012. Both the single and a new EP, Fighting Mirrors, which includes the pop anthem, have been made available for free digital download on her website. Lang’s album Self was voted one of Canada’s Top 15 Albums of 2012.

Hailing from the tiny town of Ladysmith on Vancouver Island, British Columbia, Stef Lang learned the benefits of a strong sense of community, the power of positivity, and the value of hard work at a very young age. The multi-faceted artist has been relentlessly working ever since, singing, songwriting, producing and editing music for herself and others to accomplish her dreams.

Lang burst onto the scene in 2010 with her first full-length album, The Underdog. The album received a great deal of critical and commercial praise, earning her a nomination for the Western Canadian Music Awards’ Pop Recording of the Year 2011, and she saw the first single ‘Mr. Immature’ hit #5 on the Billboard Canadian Emerging Artist chart. She had two songs featured on Canadian melodramas ‘Rookie Blue’ and ‘Degrassi Junior High’. Now she’s following that success up in 2012 with her sophomore release, Self.

Self marks a bold new step for Stef, who for the first time is exerting full creative control over her music. She personally handled every aspect of the album, writing, producing, recording and editing every song, as well as even hand painting her own album art. The devotion of her fans coupled with the excellent reception of The Underdog fueled Stef’s passion for Self, and that passion is evident in every heartfelt note. The album eschews the traditional pop trappings of parties and boys and instead focuses on introspective, empowering lyrics and compositions designed to give fans relatable, positive and motivational music and establishing Stef as a role model for future generations of women. “When you listen to music and understand what someone else is saying – you feel understood.

You feel less alone. I want to be that voice that brings sense and sanity to peoples lives. I want to give people that happiness, sadness – whatever is it that they want and need to feel. Music is an experience. I want people to experience mine,” says Stef, revealing a maturity and self-awareness beyond her years. The music video for the lead-off single is entirely fan-generated and will showcase her fans’ ideas of the concept of ‘self’.

Stef has opened for and performed with a number of big names in the industry including Suzie McNeil, Mother Mother, K’Naan, Shawn Desman, and Matthew Good, as well as performed at Canadian Music Week in Toronto, and the 2011 Canadian Radio Music Awards. She has also showcased at the 2009 Canadian Music Cafe for TIFF, the 2010 NXNE Music Festival, and the 2010 CMJ Music Festival in New York. Along with her feature albums The Underdog and Self, Stef has released three EPs: Birth, Blood and Bravery, and Fighting Mirrors.

Combining the folk sensibilities of Joni Mitchell or Ani Difranco with the pop hooks of artists like Robyn and Alicia Keys, Stef’s passion for her art is apparent in every aspect of her life and her tireless work ethic knows no bounds. She truly commits herself to following her dreams and expressing herself through her music and artwork.

Stef Lang is exceptionally talented and accomplished Canadian singer, songwriter, producer and performer. She is in conversation with Namita Nayyar, President Women Fitness.

Ms. Namita Nayyar: You started singing, dancing and playing piano at the age of 5. As a teen you began performing in music festivals and high-school plays. You started pursuing singing and reached the pinnacle of success when you released your first commercially produced full-length album “The Underdog” in May 2010. Tell us about your journey that took you to where you are now in the world of singing?

Ms. Stef Lang: The journey has been full of surprises. My first big move into music was when I won a radio contest at 17 and moved to Vancouver, BC and began interning at a studio. Over the course of the next 7 years, I focused on writing songs and playing shows. I put out several records and toured through Canada and the US. This year I moved from Vancouver to New York City and am working full time as an artist and songwriter.

Everything so far has really come down to being persistent and being a self-starter. You have to get up and make things happen for yourself. Fortunately, I’ve had some incredible support from my family and worked with many talented, kind people along the way.