Toxicodendron vernicifluum (formerly Rhus verniciflua), also known with the common name Chinese lacquer tree, is a species of genus Toxicodendron (formerly Rhus) that grows in East Asia, in regions of China, Korea and Japan. The trees are cultivated and tapped for their toxic sap, which is used as a highly durable lacquer to make Chinese, Japanese, and Korean lacquerware.
The trees grow up to 20 m tall with large leaves, each containing from 7 to 19 leaflets (most often 11-13). The sap contains the allergenic compound urushiol, which gets its name from this species’ Japanese name urushi . Urushiol is the oil found in poison ivy that causes a rash.

A caustic, toxic sap, called urushiol, is tapped from the trunk of the Chinese lacquer tree to produce lacquer. This is done by cutting 5 to 10 horizontal lines on the trunk of a 10 year old tree, and then collecting the greyish yellow sap that exudes. The sap is then filtered, heat-treated, or coloured before applying onto a base material that is to be lacquered. Curing the applied sap requires “drying” it in a warm, humid chamber or closet for 12 to 24 hours where the urushiol polymerizes to form a clear, hard, and waterproof surface. In its liquid state, urushiol can cause extreme rashes, even from vapours. Once hardened, reactions are possible but less common.

Products coated with lacquer are recognizable by an extremely durable and glossy finish. Lacquer has many uses; some common applications include tableware, musical instruments, fountain pens, jewelry, and bows. There are various types of lacquerware. The cinnabar-red is highly regarded. Unpigmented lacquer is dark brown but the most common colors of urushiol finishes are black and red, from powdered pigments of iron and ferric oxide, respectively. Lacquer is painted on with a brush and is cured in a warm and humid environment.

Artistic application and decoration of lacquer can be a long process, requiring many hours or days of careful and repetitive layers and drying times. The creation of a single piece of urushi art, such as a bowl or a fountain pen, may take weeks to months to complete. Lacquer is a very strong adhesive. The leaves, seeds, and the resin of the Chinese lacquer tree are sometimes used in Chinese medicine for the treatment of internal parasites and for stopping bleeding. Compounds butein and sulfuretin are antioxidants, and have inhibitory effects on aldose reductase and advanced glycation processes. Buddhist monks who practiced the art of Sokushinbutsu would use the tree’s sap in their ceremony.

Sokushinbutsu was practiced in Yamagata prefecture, in the rural mountains of northern Honshu, Japan’s main island. To attain sokushinbutsu required an ultra-rigorous diet. For three years, the monks drank only water and ate only seeds and nuts. They meditated all day long. For another three years they ate just roots and bark and practiced an exercise regimen designed to rid the body of fat. They drank a special tea made from the bark of the Urushi tree, which coats the inside of the body with a lacquer-like substance. The tea caused vomiting and a rapid loss of bodily fluids, but most importantly, made the body too poisonous to be eaten by maggots.

It is believed a Japanese monk named Kukai, a famous calligrapher and engineer who also founded the True Word sect of Buddhism, may have introduced the practice of sokushinbutsu from China, where it was later lost. One of the most famous mummy-monks was Daijuku Bosatsu Shinnyokai-Shonin, born in 1687 in the city of Tsuruoka. He was attracted to the teachings of Buddhism at a very early age and as a young man entered the Buddhist priesthood. Beginning in his twenties, he aspired to become sokushinbutsu. At the age of 96, he put himself on a strict diet of salt and water, which lasted for 42 days. He then drank the poisonous Urushi tea and was buried alive. In Japan, people used to practice an extreme form of Buddhism called Sokushinbutsu. One of its stranger focuses was to achieve enlightenment by mummifying yourself over several years while still alive. A key part of this was a tea made from the urushi tree, Toxicodendron vernicifluum. This tree contains deadly amounts of a concentrated poison called urushiol, also found in much smaller quantities in poison ivy. The tea would be taken in order to produce an extreme and violent reaction. The body would lose all fluids via numerous orifices almost immediately, and the remaining flesh would be highly toxic. This was perfect for mummification, as it ensured that there was almost no water left in the body for it to decompose, and the remaining tissues would become too poisonous from the urushi tea for even maggots to infest. When prepared properly, the tea itself is not quite deadly, but it was used before death to ensure the body would mummify properly and not rot or decay. Today it is illegal in Japan to drink urushi tea. 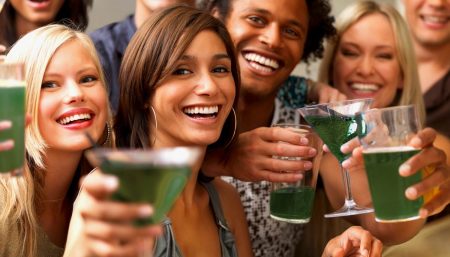 Sip For Fitness: Easy Ways To Prepare & Enjoy The Magic of Matcha Tea