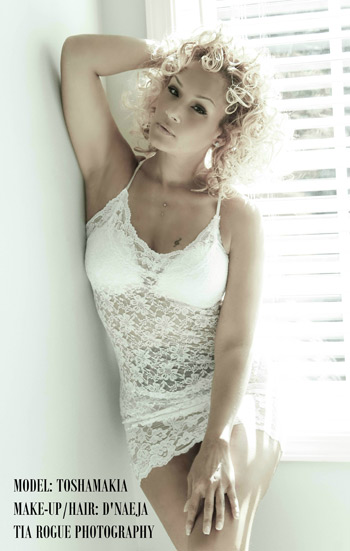 ToshaMakia is a full time model with an amazing success story. ToshaMakia is a familiar face in the Entertainment Industry. Receiving publications such as The Source Magazine “Dime Piece” section, The New York Post “One of the 50 Sexiest Single Latinas in New York City”. She later was presented with the opportunity of starring in radio. That’s when Toshamakia truly found her calling, her voice has been heard by thousands from Connecticut’s Hot 93.7, to Philly’s 100.3 The Beat, Sirius39/XM65 Backspin Radio “Ladies First with Monie Love”, to North Carolina’s 102 Jamz Wild Out Wake Up Show.

Tosha woke up one day and was having chronic back pains and they were getting worse by the day. She finally went to the doctor and was diagnosed with a fractured vertebrae, two bulging discs, and bursitis in her hip. A number of different scenarios played in her from her past abusive relationship, to posture, to her getting off the couch one day and hearing a pop. Tosha was scheduled for back surgery on May 8, 2013.

ToshaMakia was not able to walk for over a year and even though she still was able to perform her radio duties. The radio station at the time decided to let her go. Tosha immediately went into a deep depression; no job overweight at 5’7 220 labs. Tosha needed help from her mother and sixteen year old daughter to bathe and clothe her. To top it off Tosha’s physician had diagnosed her with high blood pressure and was on the verge of diabetes.

July 3, 2013 she started working out she motivated herself to get up every morning and never missed a worked out. Tosha’s doctor advised her not to exercise as much due to her back surgery. But to everyone’s surprise in just one year she lost 96lbs and was off of her medication. Now Tosha is able to run outside with her boys who are 6 and 3, and her 17 year old daughter enjoys the time they spend together. She now has a mental and spiritual change and can now walk past a mirror, stop and admire what she sees. Tosha still has the same motivation every morning that she had on July 3,  2013

Every day Tosha pushes herself to go to the gym and train and even when she is away from the gym. She is an inspiration not only to her family but also her peers and business partners. Just like a caterpillar sheds its layers, that is exactly what Tosha has done. Now weighing 129 lbs she feels more and more like a butterfly. Free to be herself and freeing herself from all the sickness that was once taking over her life.

Now Tosha is a certified personal trainer and motivates and trains others all over the world via telephone, social media and more. Just like her story has kept her alive she wants to tell the world her story in hopes of inspiring other great women that share the same experiences such as: obesity, depression, and domestic violence.

ToshaMakia is a talented model and a successful radio personality. She is in conversation with Namita Nayyar, President Women Fitness.