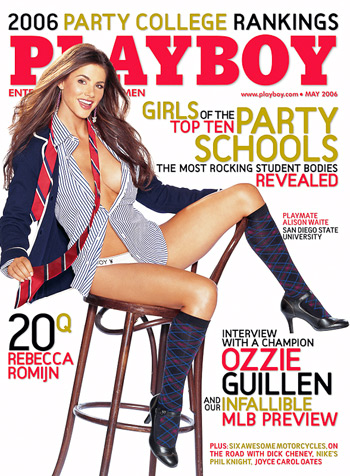 Alison Waite has been the Playmate of the month in the May, 2006 issue of “Playboy” magazine and has also being featured in several “Playboy” videos. Originally from Woodinville, WA Alison began hosting a weekly Fox show called MyTv at the age of 15. Upon graduating high school she fulfilled her dream of moving to CA to attend college at San Diego State University, earning a Master’s of Science Degree in Gerontology.

Alison hopes to someday combine her interest in the social/psychological implications of aging and hosting. She also enjoys comedy and is always looking for the funny, which is evident in her hosting and improv abilities. Though well-traveled, Alison still enjoys experiencing new places and particularly new foods. She is also a health and fitness enthusiast.

Alison Waite has been in front of the camera for over ten years, hosting a variety of shows, as well as countless event appearances and expos.

Alison Waite as a Columnist

Alison Waite is an exceptionally stunning Playmate of the “Playboy” magazine and TV Hostess. She is also world leading media personality, model, columnist and a brand ambassador. She is in conversation with Namita Nayyar President Women Fitness.