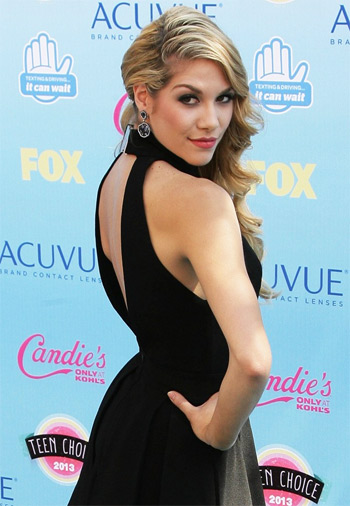 Allison Renae Holker is an American dancer. Holker is credited with a wide variety of work in film, television and concert tours. She is most famously known from her appearances on the TV Show So You Think You Can Dance, where she was a contestant in season 2 and an all-star in seasons 7 through 11.

Specializing in contemporary, ballet, jazz and tap dancing, a nine-year-old Allison Holker began her training at “The Dance Club” in Orem, UT. She then began entering dance competitions, including her wins in Colorado – “Company Dance” (2004) and New York – “New York City Dance Alliance” (2005). She graduated high school in 2006.

She has danced for ‘Earth, Wind & Fire’ and Clay Aiken. In 2002, she performed in the opening and closing ceremonies at the Utah Olympics. Allison has also performed in the tap show, “Revolution”, and on the “Ballroom with a Twist” tour, choreographed by Dancing with the Stars (2005)’ Louis van Amstel. She played a cheerleader in both of Disney’s High School Musical (2006) & High School Musical 2 (2007) films. She has taught dance classes, nationwide, with different dance conventions and workshops.

Allison Holker is an Emmy® nominated dancer and choreographer. Holker was nominated with Derek Hough for a 2013 Outstanding Choreography Emmy® award for their work on Dancing with The Stars. She was also a featured dancer in two of the other nominated pieces that year. Along with her fellow Emmy®-nominated choreographers, Holker prepared a piece that was performed to rave reviews at that year’s Primetime Emmy® Awards with Neil Patrick Harris.

She has won numerous dance titles including her first National competition in Co DANCE in 2004 and as the National Senior Outstanding Dancer at the New York City Dance Alliance in 2005. Holker first burst onto the scene when she competed in season two of So You Think You Can Dance. Her skill & popularity led to an invitation to return as an All-Star in season seven, where she met fellow dancer Stephen “tWitch” Boss.

When not filming or traveling around the country teaching dance, she is working on her new dancewear line, Creative Kin. Collaborated as choreographer for Ellen DeGeneres’ Oscars® promo directed by Bridesmaids’ Paul Feig, featuring 250 dancers.

Holker was born in Minnesota and grew up in Orem, Utah and graduated from Timpanogos High School in June 2006. She began formal dance training at “The Dance Club” studio in Orem, Utah when she was four years old and began teaching at the same studio when she was 16. She was recognized for her dance talents by winning various awards.

Best known to television audiences for her amazing performances on Fox’s hit dance competition series “So You Think You Can Dance,” Allison Holker also showcased her impressive dancing and acting skills as the cast of the VH1 television series “HIT THE FLOOR.” “HIT THE FLOOR” is set in the competitive and occasionally ruthless world of professional basketball dance teams. Holker will appeared as one of the Los Angeles Devil Girls ” CHARLIE”, the premiere dance team in the league.