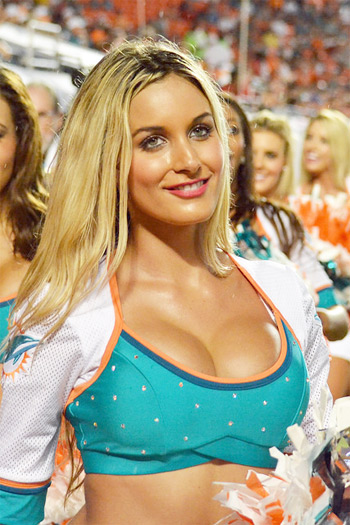 Brianne was born at Stuart, FL and now lives in Fort Lauderdale, FL USA. She has a degree AA from Palm Beach State College and is a full-time student studying fashion design.

She is a fifth-year member of the Miami Dolphins Cheerleaders and at present their captain. Her parents are very supportive of her and her goals in life.

She won the 2014 MDC Showdown. The results are in and Dolphins Fans voted popular Brianne the winner in the latest cheerleader showdown poll on Dolphins.com. For the first time in Miami Dolphins Cheerleader history, the squad has revealed the 2014 Swimsuit Calendar Girls online.

Over a six week period, two calendar months were revealed per week and fans had the opportunity to be the first to see an exclusive calendar girl photo and a behind the scenes video. The six weeks ended with the annual Swimsuit Fashion Show and 2014 Calendar Unveiling on September 5th at LIV nightclub in the Fontainbleau Hotel. Brianne was part and main attraction of the Swimsuit Calendar as well as the annual Swimsuit Fashion Show. Brianne was Miss May in the Dolphins Cheerleaders Swimsuit Calendar 2014.

Brianne is rated by Women Fitness as the world most beautiful cheerleader. She is a fifth-year member of the Miami Dolphins Cheerleaders. She is in conversation with Namita Nayyar, President Women Fitness.

Ms. Namita Nayyar: You must have started your career being a cheerleader at a young age. Later you propelled your career to the height where you have been at the top of the world of cheerleading as you won the “Dolphin’s The 2014 MDC Showdown”. Tell us something about this fairy tale journey to the top?

Ms. Brianne: Ever since I was two years old, I have been involved with all types of dancing. I also have been a Miami Dolphins fan from a very young age. My parents always had season tickets and I would attend every game. That is where I noticed the cheerleaders and knew that was something I wanted to do. When I turned 18, I decided to try out and I made the team! It has been an amazing journey and can’t believe I am going on my fifth season, time flies! I was very honored to find out I was announced the winner of this year’s Cheerleader Showdown, it was very exciting!