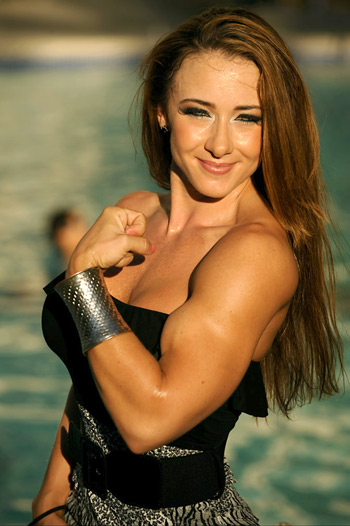 Erica Cordie is leading fitness model. She is 5’5″ in height. She grew up in Sturgis, SD. She used to love to snow ski and when she was 17 she blew out her right knee. That’s how she got into bodybuilding for rehabilitation. She has screws in her knee holding it together. She deals with excruciating pain on a daily basis while in the gym because of this. She did one bodybuilding show in 2001 and won it.

Since I grew up in Sturgis. She always worked at the motorcycle rallies there and around the country and love all her biker buddies. She has always bartender and been a shot girl at the rallies as well as some local places were she has lived. With exceptional hard work and courage she is now the leading fitness model.

Ms. Namita Nayyar: You use to do snow ski and when you were 17 years of age you had a serious injury in your right knee. That injury was instrumental in getting you to bodybuilding for rehabilitation. Tell us about your journey that took you to the top of the world of bodybuilding and being a fitness model?

Ms. Erica Cordie: A little background about myself. I from Minnesota and grew up in Sturgis / Rapid City, South Dakota. When I was young I did gymnastics, ran track, played basketball , cheerleading and snow skiing. I started skiing when I was about 8 yrs old. I loved down hill snow skiing and was starting to get pretty good at it when in 1997 I tore my knee in half skiing. I ripped my ACL, MCL & PCL in half. Doctors used my patella to make ligaments and hold them in place with permanent screws. Of course that was the end of my skiing career.

I had a brace and crutches for 9 months and took a couple of years of rehabbing to get somewhat back to normal. To this day I cannot train legs much more than bodyweight exercises because its never been able to handle too much and from compensation the opposite knee now is pretty painful. It doesn’t allow me to do much weighted exercise but I do what I can .:} The physical therapist introduced me to weight lifting after my muscle had deteriorated to 6 inches smaller than my other leg. I noticed quickly how my body was responding to the weight lifting and immediately was hooked.

I then moved to Denver, Colorado in 2000 and after 3 yrs of training I entered and won 1st place in the Mile High Heavy Weight Natural Body Building show. I decided to no longer compete because I didn’t like the extreme dieting and how I felt while doing it. Due to the lack of food and nutrients I had to sustain to get down to 7% body fat, the feeling wasn’t worth it to me.

I actually felt unhealthy. You don’t have to starve yourself to have a nice physique, you just have to avoid sugars and bad carbs. The world has been convinced that fat is bad for you and it’s not, sugar is. If you want to lose weight, cut out soda and fast food. If you want to double your results, get a gym pass. Unfortunately healthy food is more expensive than bad food, so you might rearrange your priorities. People always tell me, oh I like to eat to much so I could never look like that. Well no kidding, who doesn’t like to stuff their face. I could sit at home and eat all day, but it won’t help you achieve your fitness goals.