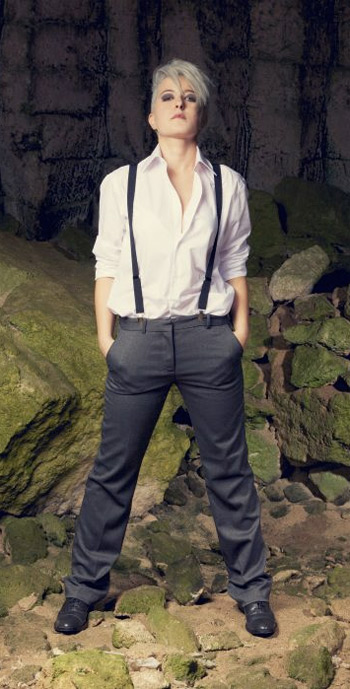 Sara Galimberti was born in Rome on March 20, 1985. She loved art since childhood and in the first part of her life she dedicated herself to the theater. From 2001 to 2003 she studied theater and drama comedy reaching the Diploma at “La Giocosa Accademia” directed by Gianni Pontillo and Antonia Di Francesco in Rome and studied comedy of art with the Director and actor Renato Capitani.

And it’s thanks to Theatre that she had the first approach with the music. After taking part to several shows of comedy and dramatic prose, she started to study with the vocal coach teacher Sabrina Germani. After this experience, she definitively dedicated her life to the music. In 2005, at the “Ostia Music Festival”, she gained the second place with the interpretation of the song “Via con me” of the Italian singer Paolo Conte.

In the same year, she is finalist at the national award “The Voice”, gaining the first place of the Critic Awards and the second place in the competition, singing at the famous club “The Place” in Rome with the same song of Paolo Conte. She took part to the training course with the coach and teacher Elio Polizzi on the “Techniques of artistic strategies from the psicosonic to the live exhibition” during the” 49° Castrocaro Festival”

In 2006 she started lessons at the Saint Louis Music College of Rome with Marco D’Angelo, Claudio Ricci, Giampaolo Ascolese and Fabiola Torresi. She alternated theoretic studies with the experience of direct singing in live concerts, introducing original interpretations of Italian and international edit songs. In the meanwhile she continues to take part to national and local music contests.

In 2008 she took part at the stage on “Songwriting techniques” with the songwriter and singer and producer Tony Bungaro and after that she worked for one year with the composer and arranger Roberto Guarino, artistic producer of Samuele Bersani, which had a former collaboration with Lucio Dalla,Stadio, Luca Carboni, Ragazzi Italiani, Fabio Concato, Nada, Biagio Antonacci, Petra Magoni, Sergio Cammariere, Mariella Nava, Zenima, Mango, Gigi Finizio, Formula 3, Pacifico, Syria, Mogol, Renato Zero.

In 2009, in parallel to the music research, she continued to exploit her artistic attitude with the study of the creative writing techniques and composing new songs. In 2010 attended the “Institute of Photography “in Rome (ISFCI). She joined the course of photography techniques, portraits and development and photo printing with good results. In 2012 she attended again the Saint Louis College, studying song techniques with Stefania Del Prete, theory and harmony with Andrea Avena, music repertoire with Maria Grazia Fontana and keyboards with the teacher Dario Zeno, brilliantly overcoming the admission to the official pre-academic course.

In 2013, the passion of music and singing become more and more strong, and she became to start the new project, either as an interpreter or author, joining the recording studios “Officina Musicale” located in south of Italy in Castellana Grotte near Bari in Puglia Region, with the supervision of Paolo Iannattone, and with the support of professional musicians ,authors and a valid team composed by Egidio Maggio, Felice Di Turi, Pierpaolo Giandomenico, Andrea Gentili, Simona Ruffino, Massimiliano Deliso, the technicians Giuseppe Saponari e Giuseppe Mariani of the “Officina Musicale”, Vincenzo Alba of Mediastudios, Rossella Deliso personal Stylist, Giancarlo Di Dio, Marina Cito graphic designer and the photographer Nico Nardomarino.

The new project is anticipated by the single “Chiamami per Nome”, who has been released in December 2013 on all the digital platforms, including youtube where it gained more than 10.000 views in less than one week. Sara therefore came back in the Italian music panorama with a new musical identity, more mature and defined (pop/rock) and with a new look which should be considered as the symbol of an interior rebirth.

Beside the mini Ep, the output of which is foreseen at short (2014), in the project is included an official video live recorded in the “Officina Musicale” studios in Castellana Grotte.

Starting from July 2014 she is taking part to many big events to promote her project with a successful response both from the audience and from the critics. She toke part with her performance to the National event of “ Miss Italia” in Mola di Bari and to the “ VIESTE FILMFESTIVAL 2014” in Puglia and during this summer she is going to sing in other important events all around Italy.

Sara Galimberti is an exceptionally talented and accomplished Italian Singer. She is in conversation with Namita Nayyar, President Women Fitness.