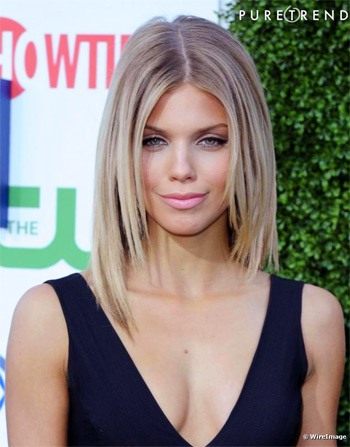 AnnaLynne McCord is an American actress and model. Known for playing vixen-type roles. McCord first gained prominence in 2007 as the scheming Eden Lord on the FX television series Nip/Tuck and as the pampered Loren Wakefield on the MyNetworkTV telenovela American Heiress.

In 2008, she was the second actress to be cast in the CW series 90210, portraying anti heroine Naomi Clark. Initially, the part of Clark was conceived as a supporting role. By the end of the first season, however, various media outlets had begun referring to McCord as the series’ lead. For the role of Naomi Clark, she was nominated for a Teen Choice Award and received the Hollywood Life Young Hollywood Superstar of Tomorrow award in 2009. In 2010, she won a Breakthrough of the Year Award in the category of “Breakthrough Standout Performance”.

Apart from acting, she has also contributed to charities in her free time, and has been labeled by the Look to the Stars organization as “one of the strongest young female philanthropists standing up in Hollywood and fighting for the charities she believes in.” In 2011, she was nominated for VH1’s “Do Something” Award in the category of “TV Star”.Her turn as a disturbed and delusional teenager in the 2012 film Excision was widely acclaimed.For her role in Excision, McCord won best actress at the Malaga International Week of Fantastic Cinema in 2012. Also for her role in Excision, she got second place for best actress at the Fangoria Chainsaw Awards in 2013.

AnnaLynne McCord was born in Atlanta, Georgia, the daughter of a Christian pastor. She was home-schooled and graduated from high school at the age of 15, after which she joined the Wilhelmina Modeling Agency and appeared in ads for various brands, including Estee Lauder, and also briefly modeled for Seventeen. McCord appears in the 2005 Italian film Natale a Miami and 2007 horror film remake Day of the Dead. In addition to appearances on Close to Home and The O.C., she played rebellious Loren Wakefield on the MyNetworkTV limited-run serial American Heiress. She was also cast as the star in another MyNetworkTV telenovela, Rules of Deception, but the show never aired, due to a change in the network’s programming strategy away from telenovelas. In addition, she has guest-starred in two episodes of the first season of Ugly Betty, an episode of the first season of Greek, and an episode of the fourth season of Cold Case.

She participated in Mexican artist Thalía’s music video “Baby, I’m in Love”. McCord portrayed Eden Lord in the fifth season of the FX series Nip/Tuck. McCord said in an interview with fearnet.com that it was “fun to play a bad girl.”

In 2008, McCord was cast in the series 90210 as Naomi Clark.Throughout the show, McCord’s character vies for social power and love. McCord was nominated for multiple awards for her work in the role, including the Hollywood Life Young Hollywood Superstar of Tomorrow in 2009, and a nomination for a Teen Choice Award for “Breakthrough Standout Performance” in 2010.

During her free time, McCord has contributed to various charities, stating that she is a “strong believer in working with organizations and giving back.” She is a big supporter of the St. Bernard Project, a rebuilding organization dedicated to assisting victims of Hurricane Katrina. She is the Goodwill Ambassador for The Somaly Mam Foundation. McCord is the cover model for the July 2009 issue of Signature magazine, a Los Angeles regional magazine. The cover story highlights her dedication to The Blind Project, “a charity organization that builds factories in third world countries to educate and employ victims of human trafficking.” According to the article, she moved her sisters from Atlanta to Los Angeles so they would be able to help her with this cause. The sisters created a clothing line, The Sisters 3, to donate to the charity.