Films in which AnnaLynne McCord has acted 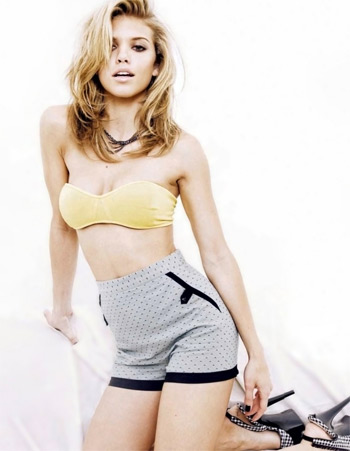 AnnaLynne McCord is an exceptionally talented film and television actress. She has winner of Hollywood Life Young Hollywood Superstar of Tomorrow award in 2009. In 2010, she won a Breakthrough of the Year Award in the category of “Breakthrough Standout Performance”. She is in conversation with Namita Nayyar President Women Fitness.

Ms. Namita Nayyar: You graduated from high school at the age of 15, after which you joined the Wilhelmina Modeling Agency and modeled for ‘Seventeen’. You first gained prominence in 2007 as Eden Lord on the FX television series Nip/Tuck, and later in MyNetworkTV telenovela American Heiress.You reached the pinnacle of success for your role in the CW series 90210. Tell us about your journey that took you to where you are now in the world of acting?

Ms. AnnaLynne McCord: The ambiguous ‘they’ would say I had an overnight success 10 years in the making. There were a lot of “no’s” before I ever heard a “yes”. People would frequently ask me what was my “Plan B”. To which my arrogant younger self would reply, “My Plan B is to make sure Plan A never fails.”

I’m currently thankful for my youthful naïveté and invincible sensibilities, they brought me through trials and over obstacles one with lesser blind faith perhaps could not have surmounted.

I have recently begun to draw once more from that well-spring of confidence; seeking wisdom from that younger me as I look to make some drastic changes in my career and personal life in this new year. Concerning my “journey up until this point”, I gained notoriety initially from my time spent on Ryan Murphy’s Nip/Tuck. My experience there was superb. It’s such a wonderful thing working with elite talent on an acclaimed show.

I went into 90210 a tad spoiled. I came from what was a very well oiled machine (Nip/Tuck having been in their 5th season at that point). And there were certain things I had come to expect. The iconic reboot barely held a candle to my previous experience. However, it was a learning curve and I’m very grateful for it.

As I now reevaluate my career choice and what I want for the future I have to say one project that made acting worthwhile to me was a tiny, cult film called Excision, directed by Richard Bates, Jr..

“Ricky”, as I call him, afforded me the opportunity to bare my soul playing his delightfully disturbed anti-heroine “Pauline”. Ricky and I would go on to debut Excision at Sundance, win awards and visit multiple festivals, but the bond created between director and actress on that gut-wrenchingly, amazingly, terrifying ride that was the making of Excision has solidified a friendship for life. 3-6AM phones calls because we’re insomniacs. Crazed text message conversations which last 4 hours. You name it. Our strange little connection is why “the biz” can be one of the coolest places on earth to work in. We’re very lucky.