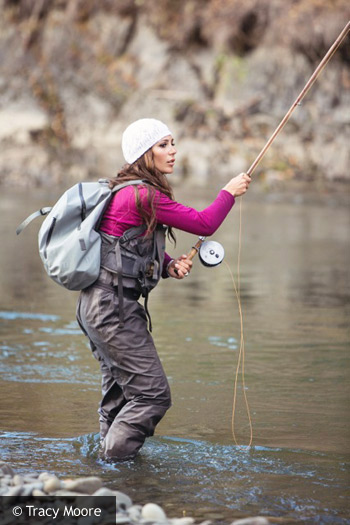 April Vokey is British Columbia based outdoors woman, primarily noted for her fly fishing influence in the angling world.

Traveling around the world, April quickly made a name for herself as a leading angler in the sport and, with a focus on education and the motto “life is too short to not follow your dreams”; she has captured an appreciated audience.

In 2008, April was in a near fatal head-on collision with a drunk driver that left her with a rebuilt foot and a rebuilt opinion on the value of life; further motivating her to share her experiences in the hope that they would inspire and hopefully, enrich the lives of those who would listen.

Breaking barriers as a primarily self-taught fisher and as an entrepreneur who started from scratch, April has been featured on a number of networks and publications that have highlighted her progress. Appearing as a featured guest on television programs such as the Steve Harvey Show, Discovery channel’s Refined, Breakfast Television, 60 Minutes and numerous other media outlets, including Fox Radio, she has enthusiastically encouraged individuals throughout North America to open their minds to the outdoor world.

April’s television exposure was further increased by her lead role in WFN’s Fly Nation and in the hit series Buccaneers and Bones where she starred alongside Tom Brokaw, Michael Keaton, Yvon Chouinard, Thomas Mcguane and Lefty Kreh as they fished on the flats of the Bahamas and shared their experiences on the Outdoor Channel.

Her new television series, April Vokey’s Shorelines, has been signed by the World Fishing Network and is in the process of filming for a release date in January 2015.

April’s articles have been published in several magazines internationally and, in addition to writing a regular column for Fly Fusion magazine, she frequently contributes to many other popular publications such as Flyfisherman, Fly Rod & Reel and Chasing Silver.

She has been interviewed by numerous magazines, including “Outside”, and has appeared on over a dozen magazine covers. An ambassador for Patagonia clothing, April has played a vital role in the design of their new women’s line.

She uses her voice as an active conservationist, sits on the board of directors for the Steelhead Society of BC, and is the founder of the popular fundraiser Flies for Fins.