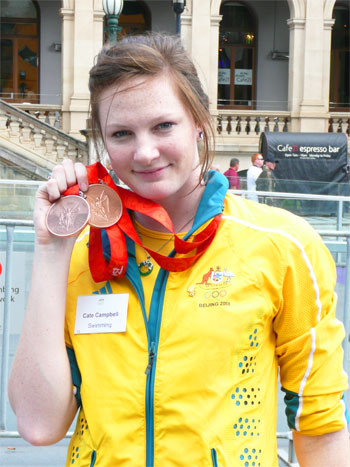 Cate has blown us away by her performance at the Rio Olympics 2016 and is an absolutely star performer in every way.

Cate Campbell was the reigning World Aquatics Champion in 100 meters freestyle swimming held at Barcelona 2013. Cate Campbell was born on 20th May 1992, in Blantyre, Malawi. She is an Australian swimmer who won two bronze medals at the 2008 Summer Olympics in Beijing. Her family moved from Malawi to Australia in 2001 and it was shortly after this Campbell took up competitive swimming. In 2007, she went to the Australian Youth Olympic Festival in Sydney and won two gold medals in the 50 m individual freestyle and 4×100 m freestyle relay.

She followed this up in 2008 with a victory in the 50 m freestyle at the Japan Open, beating compatriot Libby Trickett and setting new Australian and Commonwealth records with her time of 24.48 seconds. She is coached by Simon Cusack at the Commercial swimming club. She completed her secondary school studies at Kenmore State High School in Brisbane, Queensland. Cate is the eldest of five siblings. Her sister Bronte is also a promising swimmer and the pair competed in the same event at the 2012 Summer Olympics in London.

In 2009 despite doing a time trial of 53.40, with her 100m performance of 56.39 from 5 months earlier in March and having hip problems, she was scratched from the women’s 4×100 freestyle. However she still earned the right to swim the 50m freestyle from her runner-up swim at the world championships trials. In Rome she finished with a bronze, beating compatriot Libby Trickett and ending just 0.02s off the Commonwealth Record. 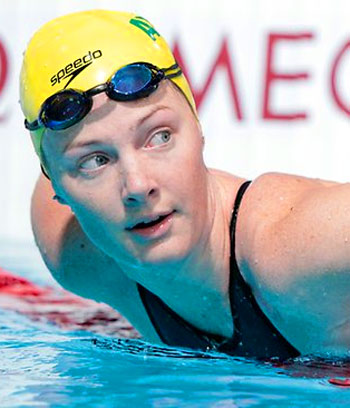 In 2010 she did not represent Australia in 2010 and was afflicted by injury. In 2012 Olympics Campbell was a member of the Australian team that won the gold medal in the 4 × 100 metre freestyle relay at the 2012 Summer Olympics. In the Women’s 50 metre freestyle she and her sister Bronte swam in the same heat, finishing third and second, respectively, and qualifying for the semi-final in tenth and ninth place, respectively.

At the 2013 Australian Swimming Championships she won gold in the both the 50 m and 100 m freestyle events, qualifying for the 2013 World Aquatics Championships. At the World Championships, she teamed up with her sister Bronte, Emma McKeon and Alicia Coutts in the 4×100 m freestyle where they won the silver medal, finishing 0.12 seconds behind the United States.On the sixth day of competition, Campbell won the 100m freestyle world title with a time of 52.34s. Campbell finished ahead of Sarah Sjostrom of Sweden and defending Olympic champion, Ranomi Kromowidjojo.