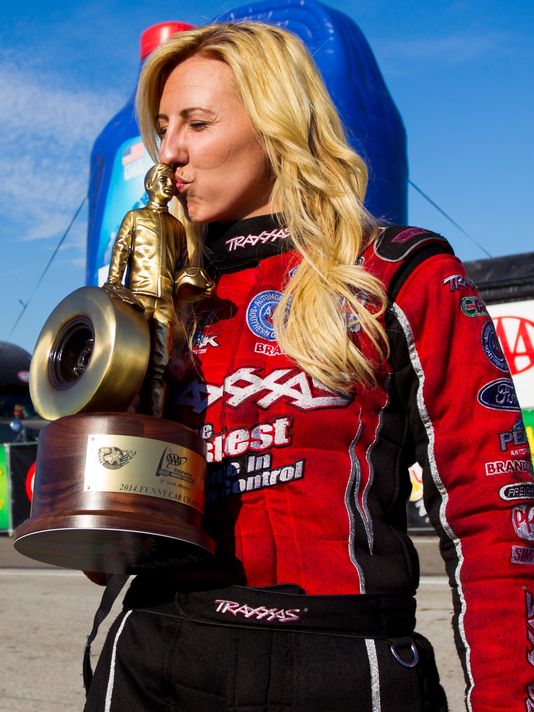 Courtney sped into the spotlight after being named “Top Agent” in the Fiesta Movement, a 2010 Ford marketing program in which 100 “agents” drove Ford Fiestas and then shared their experiences on various national social media platforms. Courtney Force was featured with her family on A&E’s reality show Driving Force.

“I grew up watching my dad race and I knew that was what I wanted to do. I went to Cal State-Fullerton and I got a degree similar to Ashley’s. She has a degree in Radio and Television; mine is in Communications. When Ashley got her start in Funny Car I couldn’t wait to join my family in the funny car ranks. I knew from the time I was a little kid I wanted to be a race car driver.”

Courtney Force is a Funny Car drag racer for John Force Racing. She is winner of Top Alcohol Dragster category at the 22nd annual NHRA Northwest Nationals. In year 2012 she won Future Award as Rookie of the Year. She became first female Funny Car driver to win O’Reily Auto Parts Winternationals 2013. She is in conversation with Namita Nayyar, President – Women Fitness. internationals in 2013. Tell us something about this journey of success?

Ms. Courtney Force: It has been such an amazing journey from the start; as a kid growing up out at the NHRA races watching my dad race and dreaming of driving a Funny Car.

At 16 years old, I started my journey by racing in Super Comp Dragster and competing for three years, then graduating into the Top Alcohol Dragster class where I raced and won throughout my three years of driving.

While racing I was also attending Cal State Fullerton where I earned by BA in Communications with an emphasis in Entertainment Studies. By 22 years old I had the opportunity to start testing in a Funny Car with my dad’s team at John Force Racing. Now, I compete among some of the toughest guys out here and champion drivers, and I have won three national events in a little over two years of driving professionally! It has been the most surreal experience and I have loved every moment of it. It’s an honor to be a part of the NHRA, a sport where men and women compete professionally on the same playing field.