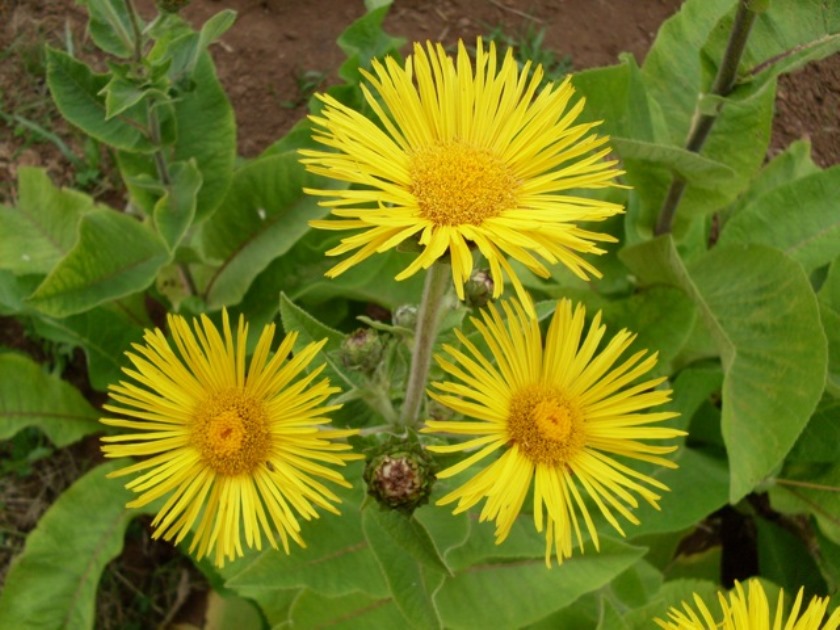 Traditionally, herbalists have used elecampane to treat coughs, particularly those associated with bronchitis, asthma, and whooping cough. The herb has also been used historically to treat poor digestion and general complaints of the intestinal tract. The herb also has an anti-bacterial effect, as an added benefit. A tea of Elecampane is useful in whooping cough.

It is a stimulant, relaxant, strengthener and tonic to the mucus membranes, both respiratory and digestive.
Elecampane can be applied externally for skin problems such as scabies and itches.

Side effects or interactions?
The inulin in elecampane root is widely distributed in fruits, vegetables and plants. It is classified as a food ingredient (not as an additive) and is considered safe to eat.8 In fact, inulin is a significant part of the daily diet of most of the world’s population.9 However, there is a report of a 39-year-old man having a life-threatening allergic reaction after consuming high amounts of inulin from multiple sources.10 Allergy to inulin in this individual was confirmed by laboratory tests. Such sensitivities are extremely rare. Moreover, this man did not take elecampane. Nevertheless, people with a confirmed sensitivity to inulin should avoid elecampane.
Alantolactone can be an irritant to the intestinal tract and, along with other sesquiterpene lactones in elecampane, may cause localized irritation in the mouth. Amounts several times higher than those stated above may cause vomiting, diarrhea, spasms, and signs of paralysis.11 If these symptoms occur, people should contact their local poison control center. Pregnant or nursing women should not use elecampane.