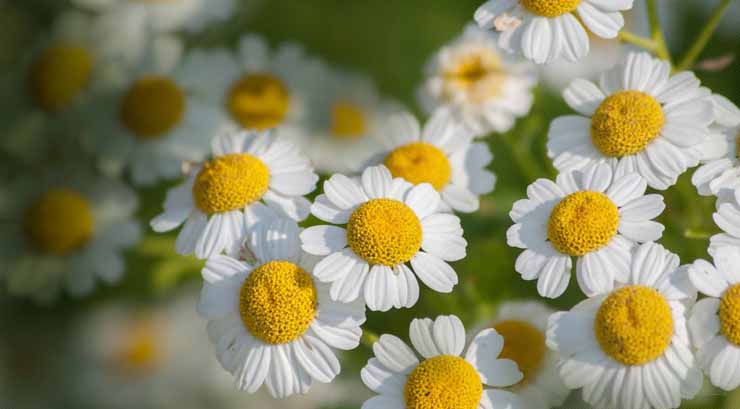 Feverfew (Tanacetum parthenium) is a perennial plant belonging to the daisy family which grows in much of Europe, North America and Canada. It has been used in herbal remedies for centuries.

Feverfew is used to relieve headaches, particularly vascular headaches such as migraines. Feverfew is also reported to reduce fever and inflammation in joints and tissues. The main constituent of feverfew, parthenolide, has been credited with inhibiting the release of serotonin, histamine, and other inflammatory substances that make blood vessels spasm and become inflamed. Parthenolide, the same substance that helps alleviate migraine headaches, has the overall effect of reducing pain and inflammation throughout the body — a result similar to taking a daily aspirin but without the side effects associated with daily aspirin use.

Feverfew has been used since early Roman times to induce menstruation and is given in difficult births in order to aid expulsion of the placenta. Useful for migraines associated with menstruation.

Feverfew is sometimes applied directly to the gums for toothaches or to the skin to kill germs.

Reduces fever, as well as number and severity of headaches, and the nausea of migraines; good for pain relief, chills, colds, and arthritis; helps body heal & strengthen itself; alcohol destroys its effects. Feverfew has been used since early Roman times to induce menstruation and is given in difficult births in order to aid expulsion of the placenta. Useful for migraines associated with menstruation.

Extracts of the aboveground parts of the plant can reduce the body’s manufacture of prostaglandin, a chemical important in inflammation, by up to 88 percent. This and other anti-inflammatory activity might explain why feverfew has been used to treat psoriasis. Despite this, a clinical trial for rheumatoid arthritis showed no benefit over placebo.

Avoid with warfarin and MOAI antidepressants. If you are pregnant, do not use without first checking with your doctor. May cause mouth ulcers, a sore tongue, swollen lips, heavier periods, dizziness, palpitations, weight gain, a rash, headaches and urinary problems.