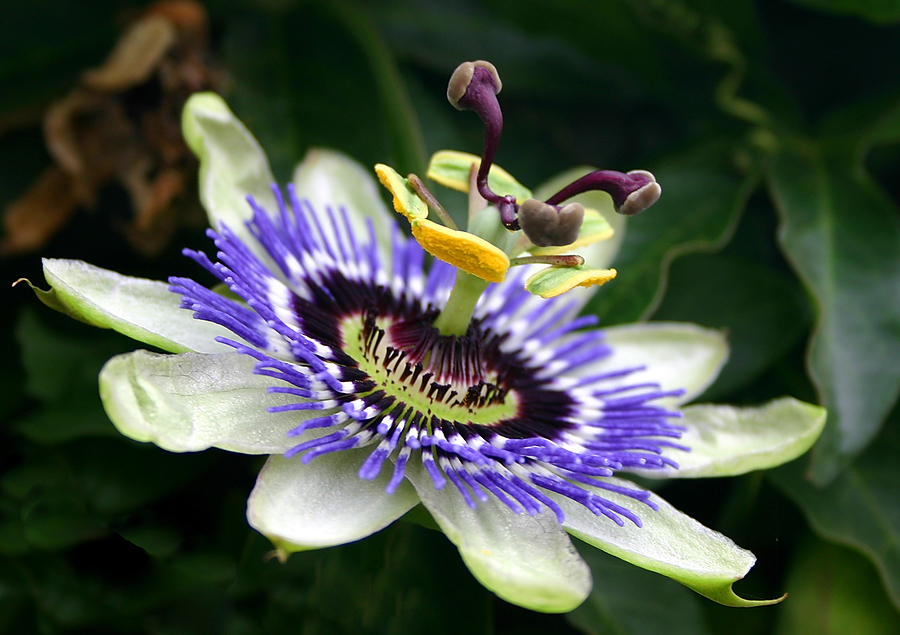 The leaves, stems, and flowers are used for medicinal purposes.

Passiflora is a native of the American continent but now grows throughout the world, thriving on rich soils in sunny climates. It is a perennial vine with a woody, hairy stem and three lobed, pointed, serrated leaves. Its flowers are cream with striking purple centres that yield orange fruits with scented seed.

The main active constituents of Passiflora are alkaloids and flavonoids, the former of which include harmine.The overall effect of Passiflora, when used as a whole herb, is as a sedative that calms the central nervous system. In Ayurvedic medicine it has been used to aid withdrawal from opium. You do not, however, have to use it in quite such an extreme way – it is a minor tranquilliser with no addictive properties, so it is appropriate for a whole host of conditions, from sleeping problems to nerve spasms.

As Passiflora has antispasmodic properties, it can reduce the muscle spasms and gastric spasms that often accompany stress. Tension and anxiety will be countered, and it contains alkaloids that prevent serotonin from being broken down. This makes it anti-depressive, a useful alternative to Hypericum for those who can’t take it. Stress and depression are key health issues in our modern world, and the nerve relaxant, blood pressure lowering effects of Passiflora make it of prime interest to those vulnerable to stress symptoms.

Passiflora seems to reduce perception of pain, and has been used for neuralgia, shingles and general nerve pain. It is very helpful during the menopause, when falling hormone levels can make women prone to anxiety and depression

The recommended intake of the dried herb is 4–8 grams per day. To make a tea, 0.5 to 2.5 grams of the herb can be steeped with boiling water for ten to fifteen minutes and drunk two to three times per day. Alternatively, 5–10 ml of passion flower tincture can be taken three to four times per day.

However, this interaction is theoretical and has not been reported in the medical literature. A single case has been reported of a 34-year-old female who developed severe nausea, vomiting, drowsiness, and heart symptoms following self-administration of passion flower. It is not known for certain if passion flower caused her symptoms.

Passion flower has not been proven to be safe during pregnancy and breast-feeding.