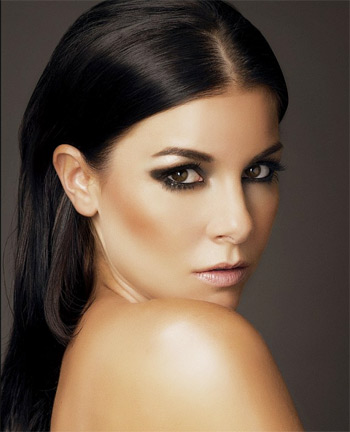 Imogen Mary Thomas is a Welsh glamour model, beauty queen and television personality. She rose to fame in 2003, after winning Miss Wales, and achieved further note in 2006, when she lasted three months on the seventh series of Channel 4 reality television programme Big Brother (which has since moved to Channel 5).

Imogen was born to Charles Thomas and his wife Janette in Gorseinon, near Swansea. She speaks Welsh fluently. Thomas started working as a model at age 13, and at the age of 17 moved to London to become a professional model.

She returned to her studies, and gained a degree in Health studies and Psychology at the University of Worcester. During this period she entered beauty contests, and was crowned Miss Wales in 2003, beating future Big Brother 9 winner Rachel Rice, who came third. She went on to represent Wales at Miss World in China. This prompted her to return to London to try glamour modelling.

Thomas was selected as a housemate for the seventh series of Big Brother. On Day 84, Imogen moved with fellow nominee Richard into the House Next Door, where she remained until she was evicted on Day 86 with 62% of the public vote.

Since her time on Big Brother, Thomas has become a glamour model. She has had covergirl shoots with Zoo and Maxim magazines, while she had long running contracts with the Daily Star newspaper. Thomas was in the running for FHM Sexiest Woman in the World, coming in 58th. In 2008, she was included in the list of Playboy Bunnies on Playboy’s website. In 2010 she shot her first calendar. In November 2006, Thomas was voted the Sexiest Woman in Wales, ahead of both Catherine Zeta-Jones and Charlotte Church.

Thomas has also been voted the sexiest Big Brother housemate.

Like other contestants, Thomas has taken part in many Big Brother spin-off programmes, including BBLB and Big Brother’s Big Mouth. She also co-presented with other housemates for T4. She has also made numerous personal appearances in various programmes, including: E4’s horror Dead Set, written by Charlie Brooker; the BBC Three programme Wags, Kids and World Cup Dreams, and Celebrity Coach Trip partnered with friend Bianca Gascoigne.

A fluent Welsh speaker, she has appeared on various S4C programmes, including Uned 5, Wedi 3, Wedi 7, Jonathan Show and Bwrw Bar. She had her own show along with Glyn from Big Brother called Glyn and Imogen: A Year On. She also had a cameo role in the Welsh-language television soap opera Pobol y Cwm. An S4C documentary series called Salon. She is now focusing on being involved with baby brands and writing for The Baby Centre.

Imogen Thomas is rated sexiest woman in Wales and is a leading glamour model. She is also an actress, media personality, model, reality TV star, style icon and a brand ambassador. She is in conversation with Namita Nayyar President Women Fitness.