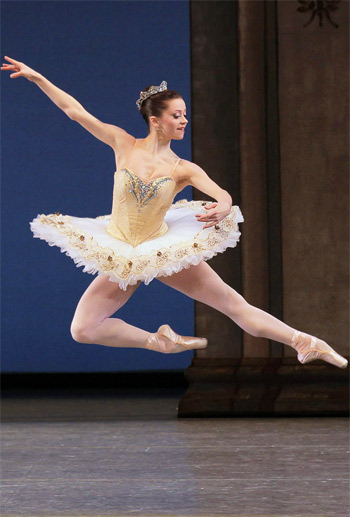 Megan Fairchild is a principal dancer with New York City Ballet. She was born in Salt Lake City, Utah, and began her dance training at the age of four, studying with Judy Levitre and Kaelynne Oliphant at Dance Concepts in Sandy, Utah, and at the Ballet West Conservatory in Salt Lake City with Sharee Lane, Deborah Dobson, and Maureen Laird. While also at the Ballet West Conservatory, Ms. Fairchild was also a Ballet West trainee.

Ms. Fairchild entered the School of American Ballet, the official school of the New York City Ballet, in the fall of 2000, studying under the guidance of Suki Schorer, Susan Pilarre, and Kay Mazzo.

Ms. Fairchild’s expansive repertoire includes principal roles in full-length ballets and contemporary works. Principal roles include the Sugar Plum Fairy and the Dewdrop in George Balanchine’s The Nutcracker, Pierrette in Balanchine’s Harlequinade, the Second Act Divertissement in Balanchine’s A Midsummer Night’s Dream, Swanhilda in the George Balanchine/Alexandra Danilova production of Coppelia, Aurora and Princess Florine in Peter Martins’ The Sleeping Beauty, and Florence in The Blue Necklace in Susan Stroman’s Double Feature.

In 2001 Ms. Fairchild was a recipient of the Mae L. Wien Award for Outstanding Promise.In 2011 Ms. Fairchild danced the role of the Sugar Plum Fairy in PBS’ Live From Lincoln Center telecast of George Balanchine’s The Nutcracker, which was also screened in movie theaters and cinemas around the world.

Ms. Fairchild is currently a Teaching Fellow with the School of American Ballet, the official school of New York City Ballet.

Megan Fairchild Veyette is an exceptionally talented and accomplished ballet dancer. She is recipient of the Mae L. Wien Award at the School of American Ballet. She is in conversation with Namita Nayyar President Women Fitness.