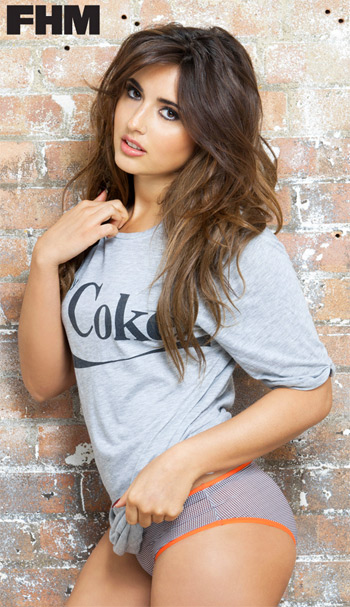 Nadia Forde is an Irish model, singer and actress of Italian descent. She participated in the fourteenth series of the hit ITV show I’m a Celebrity…Get Me Out of Here!, starting on 16 November 2014. She has also appeared in her own show Nadia Goes to Hollywood.

In 2014, Forde starred in her own TV3 show Nadia Goes to Hollywood, documenting her time recording her first single and capturing her first acting role in the United States. In 2013, Forde appeared on Ireland’s The Late Late Show and presented Irish morning television. She has also appeared on nationwide radio stations, made theatrical appearances at Dublin’s Tivoli Theatre, been a regular guest on RTE’s The Republic of Telly and a contestant on TV3’s Celebrity Salon in 2012. Forde has been voted by FHM readers as one of the 100 Sexiest Women in the World.

In late 2013, she released her debut calendar for 2014. In 2014, Forde has been touring and promoting her first single “BPM” in the UK, Ibiza and Miami, which reached number 8 in the Urban Club chart in the UK. Her next single is set for release in January 2015. She also sung the national anthem prior to Ireland’s international football match against Sweden in September 2013.

In August 2014 Nadia Forde made an appearance on the Oliver Callan spoof sketch show,Callan’s Kicks. Following on from the success of her 2014 ratings winning TV3 show “Nadia Goes To Hollywood”, documenting her time recording her first single and capturing her first acting role in America, Nadia is busy filming a new documentary TV series for broadcast in early 2015. One of Ireland’s top models and television personalities, Nadia has been in demand since her teenage years, with appearances on Ireland’s “The Late Late Show”, presenting Irish morning television, appearing on nationwide radio stations, theatrical appearances at Dublin’s Tivoli Theatre, flexing her comedic muscles as a regular guest star on RTE’s “The Republic of Telly” and as a contestant on TV3’s top rated “Celebrity Salon”.

Her life has been documented with regular interviews and features in the newspapers as well as YOU, Life, Stellar and VIP magazines. Nadia has become one of Ireland’s favourite young stars.

Nadia had one of the best-selling female model calendars in the UK for 2014 and 2015. Last summer, Nadia has been touring and promoting her first single “BPM” in the UK, Ibiza and Miami, which got to number 8 in the Urban Club chart in the UK.

Nadia Forde is an exceptionally talented Irish singer, actress and model. She is in conversation with Namita Nayyar, President Women Fitness.