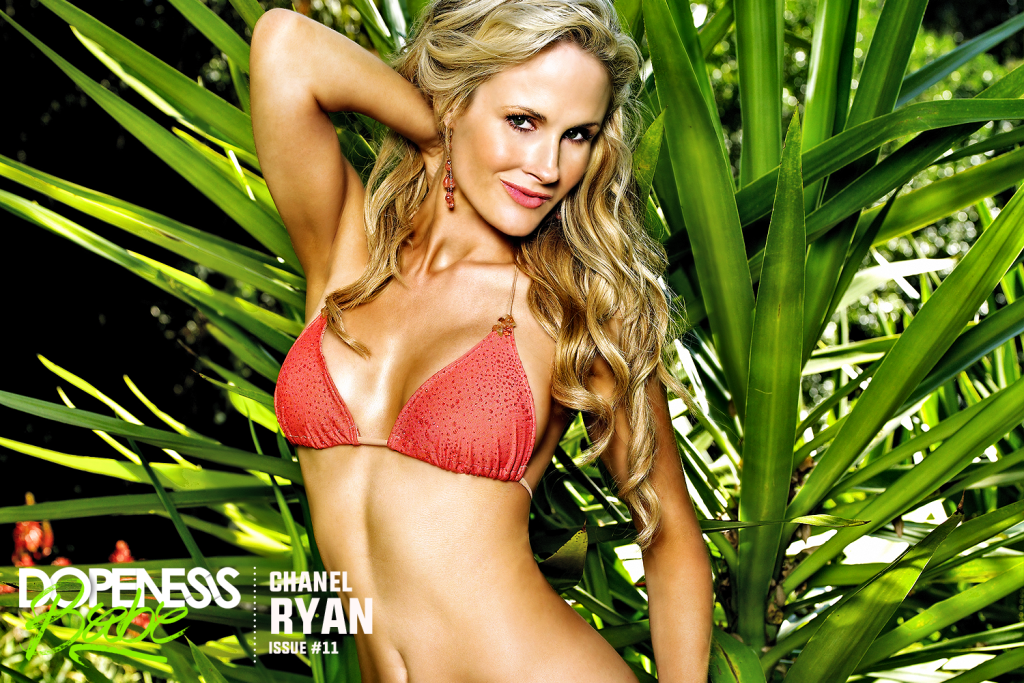 Chanel Ryan, an American actress and model of German and Irish descent, is no stranger to the entertainment industry. She has successfully navigated the acting and modeling industry over the past decade. Discovered on the beach in her early teens, her career has been going non-stop ever since.

Ryan’s first movie appearance was in the independent film WAITING FOR THE ROCKET in 1994. In 1997, she auditioned for the film GEORGE WALLACE. Legendary director John Frankenheimer offered her the part on the spot, working with veteran actors Gary Sinise and Mare Winningham. In 1998, she landed the role of one of the Felon Cheerleaders in the Universal film BASEkeball, from the creators of South Park and director David Zucker. In 2002, her improv training with the Groundlings and ACME Comedy Theater helped her garner a guest starring role opposite Bill Murray in the pilot THE SWEET SPOT, as well as the role of iconic entertainer Andy William’s girlfriend and co-host on THE ANDY WILLIAM’S EASTER SPECIAL for the BBC.

During the early years of her career, Chanel’s main focus was modeling. She still continued to take acting jobs sporadically, but enjoyed success in the modeling world and spent the majority of her time traveling to different exotic locations for work. In 2011, she shifted her attention from modeling to acting full time. Her recent acting roles include Jonas Akerlund’s SMALL APARTMENTS with James Caan and Billy Crystal; DOROTHY & THE WITCHES OF OZ, starring Sean Astin, Christopher Lloyd and Lance Henrickson; SKUM ROCKS with Alice Cooper and BAD KIDS GO TO HELL with Judd Nelson and Ben Browder, based on the best-selling comic book.

She appears as “Fantazia” in the cult classic follow-up HOBGOBLINS 2 from director Rick Sloan and is next featured in, the soon-to-be-released horror film, ALICE D, where she plays genre legend Kane Hodder’s evil sidekick “Isabel”; Creature Feature DEAD SEA alongside scream queen Devanny Pinn; and the upcoming drama BIGGER THAN THE BEATLES as Candice Bergen.

Next, she’ll be starring in three independent films; horror film CIRCUS OF THE DEAD alongside Bill Oberst Jr., the psychological thriller HOUSE ON RODEO GULCH and the sci-fi feature HALO THEORY. Always striving for more from her career, the progression to producer was only natural. Her work as an actress on back to back independent features and her years of modeling has served as a hands on film school.

She is currently in preproduction on her feature film producing debut: CRIMSON SAINTS, where she brings her extensive experience, knowledge of public relations/marketing/branding and her vast rolodex to the project. Chanel has studied with some of L.A.’s most respected and renowned acting coaches including Margie Haber (Master Class), Aaron Speiser, Lesly Kahn and Katt Shea. She’s had extensive dialect coaching from the “Master of Voices”, Bob Corff, helping her perfect numerous accents, from British to Southern.

One of her other specialties includes full tactical weapons training from an instructor whom trains both military and SWAT officers. She’s proficient with hand guns, automatic rifles and shotguns, as well as hand to hand combat including knife and firearm disarmament.

To date, Chanel has appeared in over 30 national commercials including PEPSI, SATURN, VOLKSWAGEN, DEL TACO, WET & WILD COSMETICS, AUDI, COCA-COLA, and VISA. You have seen her in campaigns for ANHEUSER BUSCH, BURKE WILLIAMS SPAS, HARLEY DAVIDSON SWIMWEAR, HARRAH’S CASINOS and MILLER BEER, as well as in fashion shows for FREDRICK’S OF HOLLYWOOD.

Named one of the “Sexiest Women on the Planet” by magazines from four continents, her face and body have graced magazines across the globe, including MAXIM, FHM and PLAYBOY. In 2004, Chanel created her “CHANEL” Swimsuit Calendar; garnishing awards year after year and becoming a seasoned producer of photography and editorial layouts.

Her shoots appear regularly on magazine covers and editorials around the world; in publications such as FHM, DT, NUTS, MEN’S EDGE, PEOPLE, RALPH, etc. Her clients range from fashion designers, models and actors, feature film campaigns and image consultancy.

An avid animal lover, activist and “rescuer”, Chanel shares her home with two “adoptees”; a cat named Ruby Tuesday and a border collie named Lucky. A portion of the proceeds from her swimsuit calendars, to her numerous autograph appearances, go to support animal charities each year.

Chanel Ryan, an accomplished actress and ranked by Maxim as “Sexiest Women on the Planet” is in conversation with Namita Nayyar, President Women Fitness.

Ms. Namita Nayyar: You were discovered on the beach in your early teens and started modeling. You reached the pinnacle of success when were Named one of the “Sexiest Women on the Planet” by magazines from four continents, including MAXIM, FHM and PLAYBOY. You started pursuing acting and excelled in number of films. Tell us about your journey that took you to where you are now in the world of acting and as a model?

Ms. Chanel Ryan: My career started of as a model. I had always wanted to be in the entertainment industry but living far from Hollywood didn’t know where to even begin. I was very fortunate and was approached on the beach in my early teens to model for a swimwear campaign. Shortly after that I was at the park with a girlfriend and we were both asked to try out for an advertisement. We both booked the job.

Around the same time I was at my friends house for dinner and their older sister was doing wardrobe on a film and that is how I got my first walk on role! From there modeling jobs started rolling in and I went on to become a successful model. Years later with a ton of hard work I am still having fun doing what I love! Modeling was very good to me and took me all over the world. I still model occasionally if a nice booking comes along but it is no longer my focus. A couple years ago I switched my focus to acting full time.