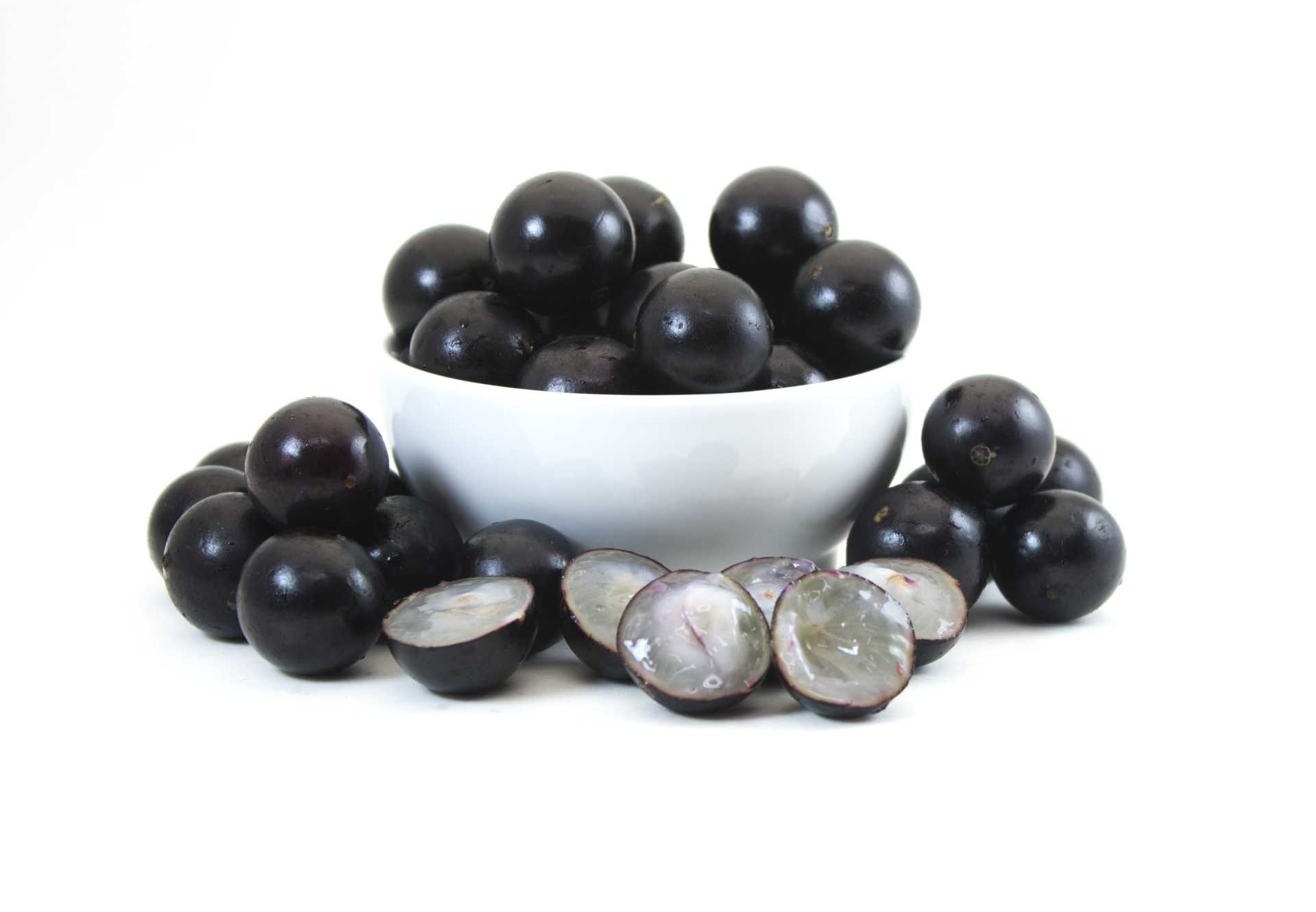 The Jabuticaba is a fruit-bearing tree in the family Myrtaceae native to Minas Gerais and Sao Paulo states in southeastern Brazil. Related species in the genus Myrciaria, often referred to by the same common name, are native to Brazil, Argentina, Paraguay, and Bolivia. The tree is grown for its purplish-black, white-pulped fruits; they can be eaten raw or be used to make jellies and drinks (plain juice or wine). Other common names include Brazilian Grape Tree, Jaboticaba, Jabotica, Jabuticabeira, Guaperu, Guapuru, Hivapuru, Sabara and Ybapuru (Guarani).

Common in Brazilian markets, jabuticabas are largely eaten fresh; their popularity has been likened to that of grapes in the United States. Fresh fruit may begin to ferment 3 to 4 days after harvest, so they are often used to make jams, tarts, strong wines, and liqueurs. Due to the extremely short shelf-life, fresh jabuticaba fruit is very rare in markets outside of areas of cultivation. Traditionally, an astringent decoction of the sun-dried skins has been used as a treatment for hemoptysis, asthma, diarrhoea, and gargled for chronic inflammation of the tonsils.

Several potent antioxidant and anti-inflammatory anti-cancer compounds have been isolated from the fruit. One that is unique to the fruit is jaboticabin.

The name jabuticaba, derived from the Tupi word Jabuti (tortoise) + Caba (place), meaning the place where you find tortoises. The Guarani name is “Yvapuru”, where yva means fruit, and the onomatopoeic word puru for the crunching sound the fruit produces when bitten. A traditional song from the eastern region of Bolivia refers to a young woman as having “eyes like the guapuru” (because of their soft blackness) and a mouth “as sweet as the achachairu.”

The jabuticaba tree, which appears as a charge on the coat of arms of Contagem, Minas Gerais, Brazil, has become a widely used species in the art of bonsai, particularly in Taiwan and parts of the Caribbean. In Brazil, it is common to refer to something allegedly unique to the country as a “jabuticaba” since the tree supposedly only grows in Brazil. It is usually a pejorative expression.

Jabuticaba is used for the treatment for hemoptysis, asthma, diarrhea and dysentery also as a gargle for chronic inflammation of the tonsils are by the caustic decoction of the sun-dry skins is agreed in Brazil. Such use of fruit also may lead to excessive consumption of tannin. The fruit of Jaboticaba contain compounds similar to known to have positive biological effects in cranberries, grapes and other related species, including anti-ageing, anti-inflammatory and the antioxidant qualities.

1. Jabuticaba Fruit can be stimulating, opens up bronchial airways, which is good for asthma, and slightly astringent making it great for diarrhea, and also healing those suffering from tonsillitis.

2. Jabuticaba Fruit is anti-inflammatory, and full of great antioxidants.

4. Jabuticaba Fruit contains lots of protein, low in carbs, and high in calcium, iron, phosphorus, and very high in Vitamin C and has some B vitamins, and very low in calories.

5. New studies are being done on the effectiveness of Jabuticaba for fighting cancer… because it contains many anticancer compounds.

6. Jabuticaba Fruit soothes the GI tract, helps with arthritis, and also prevents many skin diseases and even hair loss

8. Jabuticaba Fruit is rich in phenolic compounds, among which we can highlight the anthocyanins. Anthocyanins are the most abundant type of flavonoid and they are responsible for the blue or purple colour. Anthocyanins are the only fatty acid that is believed to play an important role in the health benefits exerted by this fruit, apart from the polyphenolic content found on it and more specifically punicalagins, punicalins, gallagic acid, and ellagic acid that act as powerful antioxidants.

9. In Jabuticaba Fruit there is another active constituent present on this fruit, a depside known as jaboticabin, which may also play an even more important role on the health benefits of this fruit, because depsides exert antibiotic, anti-HIV,antioxidant, and anti-proliferative activity.