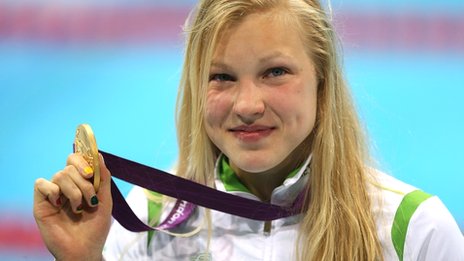 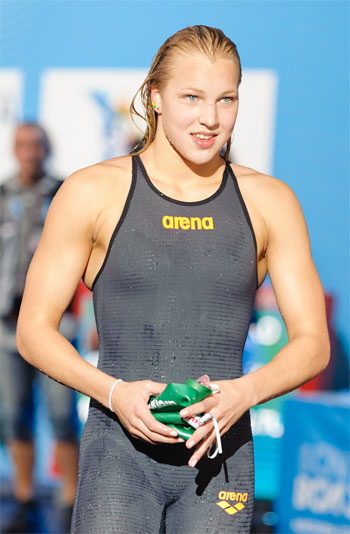 Ruta Meilutyte of Lithuania has broken a world record that was set only hours earlier in the women’s 50-meter breaststroke at the world swimming championships. In the second semifinal heat, Meilutyte touched in 29.48 seconds, beating the record set in the morning preliminaries by Russia’s Yuliya Efimova. Efimova was swimming the same heat as the 16-year-old and touched second in 29.88, just off the mark of 29.78 she held for not even a day. She had broken the previous record set by American Jessica Hardy in 2009 at the height of the rubberized suit era, 29.80. The 50 breaststroke is not an Olympic event. It was the second world record for Meilutyte at these championships. She also set one in the semi-finals of the 100 breast.

Ruta Meilutyte said: “Basketball is always going to be the number one sport in Lithuania. I love it. too, but swimming is getting a bit more recognition now. “In the September after winning Olympic gold, all of the pools were crowded with loads of people wanting to swim and get involved which was great. Finally people are understanding the sport, that it’s hard work and lots of effort goes into it. “There’s also a lot more people coming to see me at competitions now – Lithuanians who live all over the world – which for me is great.”

Last summer she won the country’s first Olympic swimming gold and became the nation’s biggest female sports star. That hype could now reach dizzying new heights after she secured the world 100m breaststroke title and a world record in Barcelona this week. Yet the teenager has an escape from the adulation in her homeland in an unlikely place – Plymouth.

Meilutyte lives in the south west of England after moving over in 2010 to train. “I couldn’t have achieved my dream if I’d stayed in Lithuania and that is quite sad,” said the teenager. At a time when British swimmers are struggling internationally, some have speculated that Meilutyte could be tempted to switch allegiance. It appears there is no chance.

“I’m really grateful to Britain for providing me with the facilities, but it’s not like I’m going to change my nationality,” she said.

“I will always represent Lithuania as it’s my country and I love it, but when I swim I also represent Plymouth, so credit goes to them as well.” Her resolve, which belies her tender years, can perhaps be traced back to her difficult upbringing. Born in the country’s second-largest city, Kaunas, to a far from affluent family, her mother, Ingrida, was killed on a pedestrian crossing when Meilutyte was just four. Her father, Saulius, worked abroad during most of her childhood to provide for his family. The young Ruta was raised predominantly by her grandmother until she reached her “terrible teens”.

At this point, it was decided it would be better for her and her swimming career to relocate to the United Kingdom to be with her father. Saulius, who was doing maintenance work at the pool where the Plymouth Leander Swimming Team are based, convinced head coach Jon Rudd to let her come for a trial that summer. The rest is history.