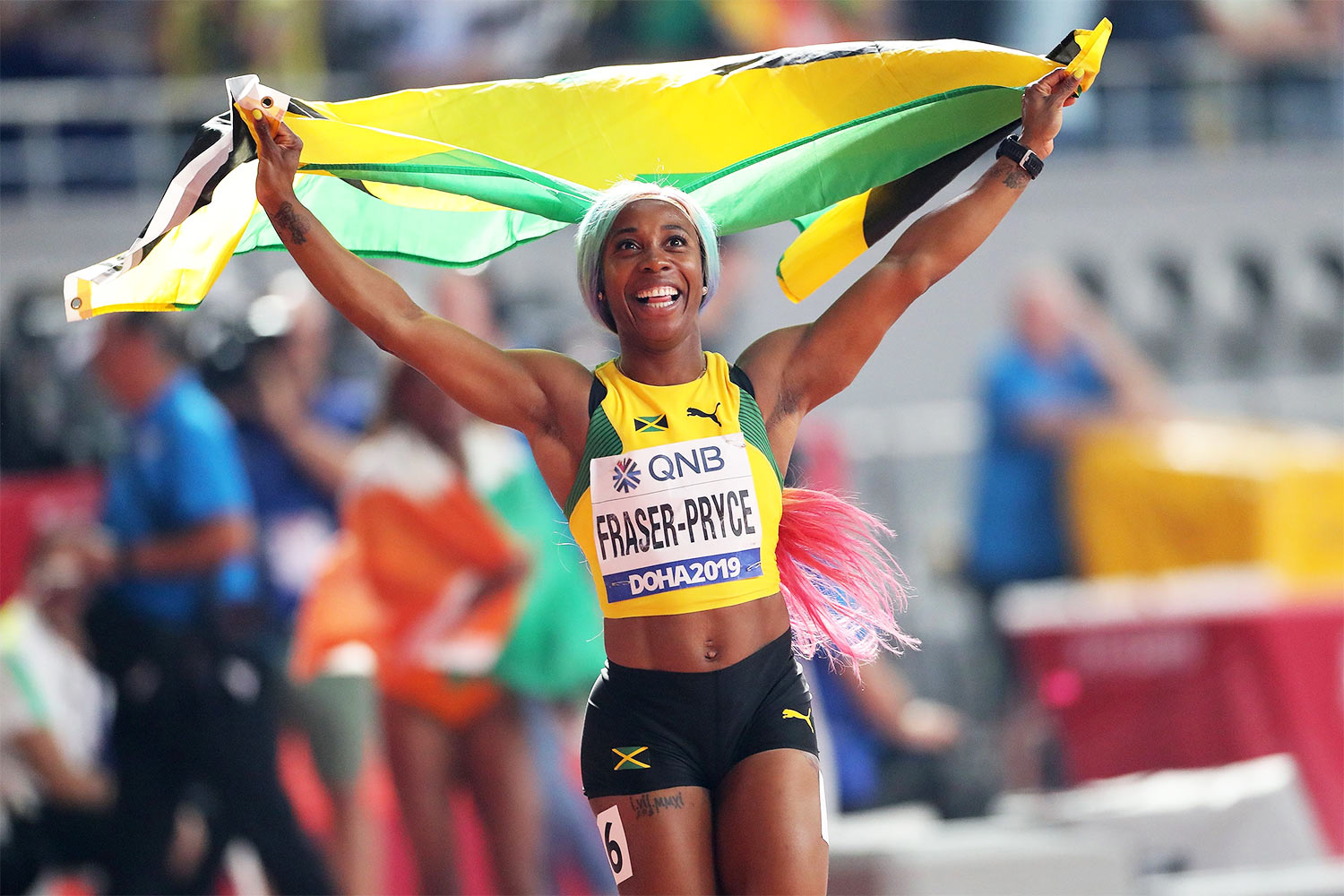 Shelly-Ann Fraser-Pryce staked her claim as one of the greatest female sprinters of all time by storming to victory in the women’s 100 meters final at the World Championships in Doha on 29 September 2019.

She completed in a time of 10.71 seconds to claim her fourth world championship title in the discipline and eighth world title overall.

Fraser grew up in the impoverished, violence-plagued Waterhouse district of Kingston, Jamaica. She was raised with two brothers by her mother. Fraser occasionally competed in track-and-field events in primary school, starting at age 10. As a high-school student, she raced 100 metres in 11.57 seconds-a promising result for a 16-year-old girl. In 2007, while attending the University of Technology in Kingston, she improved her best to 11.31 seconds, placed fifth at the national championships, and earned a silver medal at the world championships for her run in the heats of the 4 x 100-metre relay.

Although she was coached by Stephen Francis, who had guided Jamaica’s Asafa Powell to four men’s 100-metre world records, Fraser’s breakthrough in 2008 was sudden and unexpected. At the Beijing Olympics she won gold in the 100 metres with a time of 10.78 seconds. At just 5 feet 3 inches (1.60 metres). Fraser lived up to the “Pocket Rocket” nickname given to her by a journalist. She secured the 100-metre world title at the 2009 world championships in another personal best (10.73 seconds), she also ran on Jamaica’s winning 4 x 100-metre relay team.

At the 2008 Summer Olympics, held in Beijing, China, Fraser-Pryce won the gold medal in the women’s 100-meter race, with a time of 10.78 seconds. Fraser-Pryce is the first Jamaican woman in history to receive 100-meter gold.

In 2009, Fraser-Pryce won the 100-meter Jamaican title at the 2009 World Championships, held in Berlin, Germany, becoming the second female sprinter in history to simultaneously hold both Olympic and world 100-meter titles.

At the 2012 Summer Olympic Games, held in London, Fraser-Pryce won her second straight 100-meter Olympic gold medal with a time of 10.75 seconds, beating American track star Carmelita Jeter. The win made Fraser-Pryce the first woman to repeat 100-meter victories since American Gail Devers (in 1992 and 1996).”It means a lot to defend my title,” Fraser-Pryce told ESPN after the race. “I trusted in myself.” Fraser-Pryce went on to win a silver medal in the 200 meters.

In 2013 Moscow World Championships Fraser-Pryce won the 100m race in a time of 10.71 which gave her the world lead. It was her second World Championship in that competition after having won the title in 2009. With teammate and title-defender Veronica Campbell-Brown absent because of a doping ban and main competitor Allyson Felix withdrawing halfway in the final race due to injury, Fraser-Pryce won the 200m title in a time of 22.17. It was her first major title over that distance. As the final runner of the 4 x 100 m relay team she won her third gold medal of the competition with teammates Carrie Russell, Kerron Stewart and Schillonie Calvert. Their time of 41.29 also set a new championship record. At season’s end the International Association of Athletics Federations named Fraser-Pryce its 2013 Woman Athlete of the Year.

Fraser-Pryce and fellow Jamaican athlete Usain Bolt swept the sprinting events for their respective genders at the meet, winning three gold medals each in the 100m, 200m, and 4x100m races.

Shelly-Ann Fraser-Pryce is the third woman in history to repeat as the 100 meter Olympic Champion from the 2008 Beijing Olympics and also the 2012 London Olympics. As a result, she was awarded female Athlete of the Year in January 2013 for her gold medal performance at the 2012 London Olympic Games in the women’s 100 meters, her silver medal performance in the 200 meters and helped the Jamaican 4 x 100 meter relay team win a silver medal. In accepting her award, she exclaimed, “It was a long year, as it was my final year in college, but it was a very important year for me as I wanted to repeat my title and wanted to win. I have to give God thanks for everything that happened last year.”. 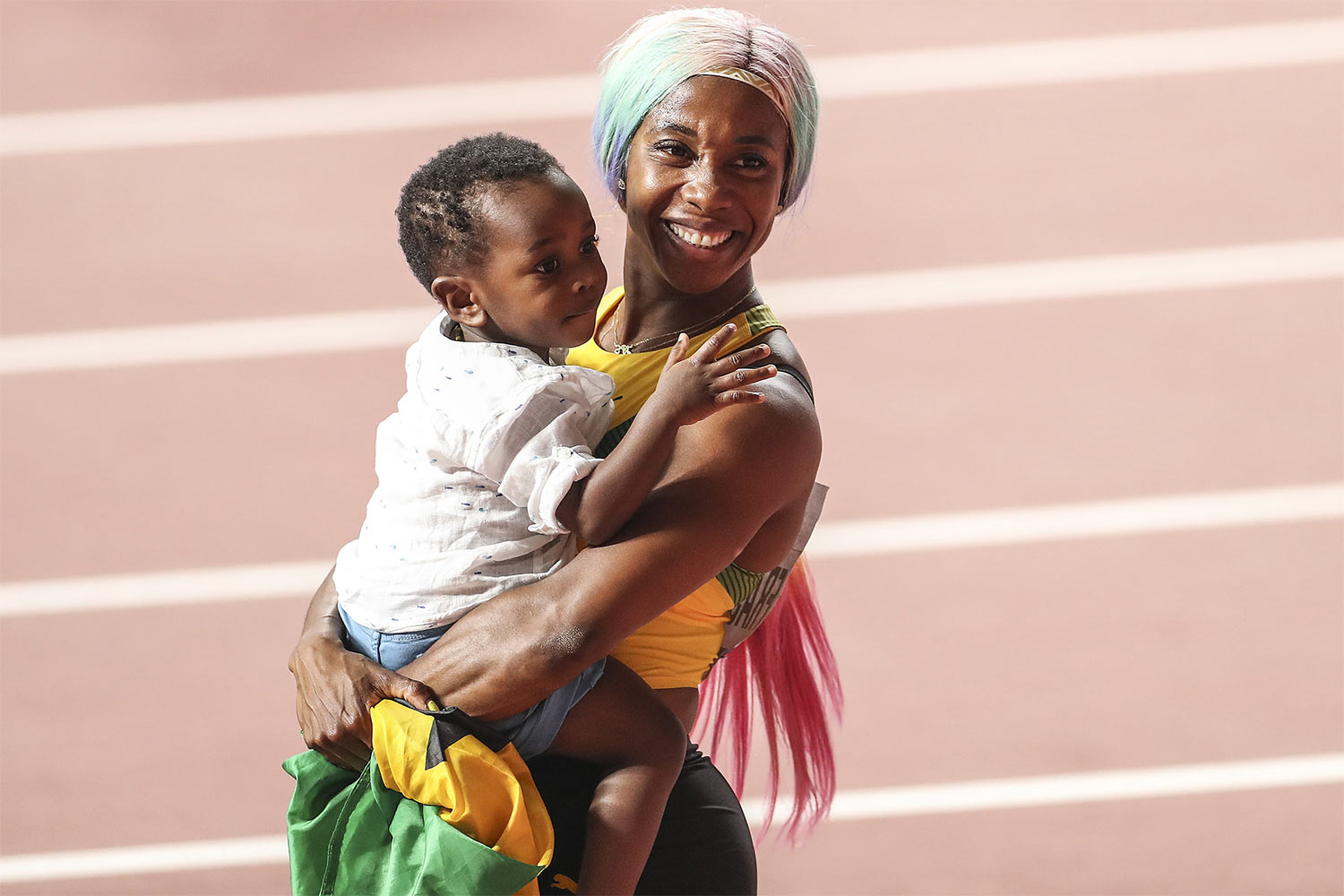