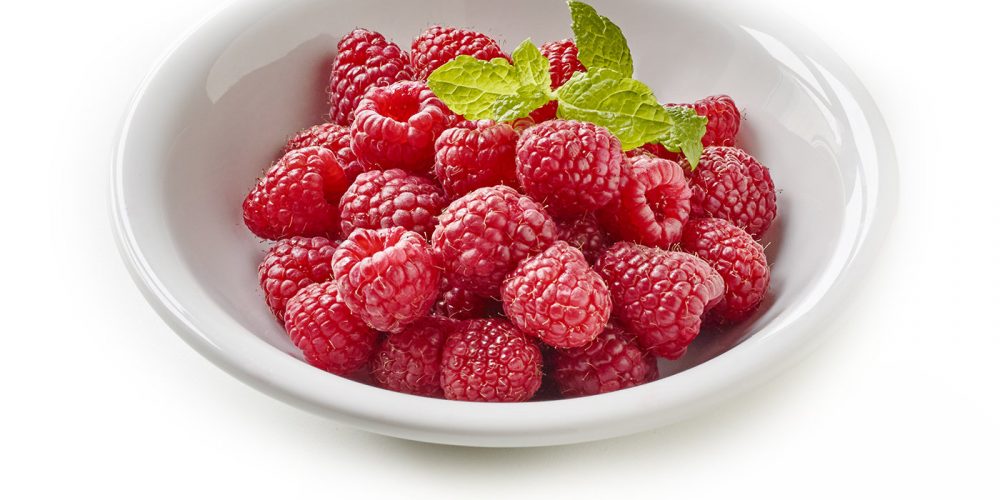 These are small, tightly-packed red berries found during summer or autumn. They are used to make jams, jellies, pies, and ice creams. They have a high vitamin C and manganese content. They also contain vitamin K and magnesium.

Wonderfully delicious, bright red-colored raspberry is among the most popular berries grown all over the world. They are rich source of health promoting plant-derived nutrients, minerals, and vitamins that are essential for optimum health.

Botanically, the plant is a small shrub belonging to the family Rosaceae, of the genus: Rubus. It grows very well in temperate regions. The exotic berry is native to Europe but now widely cultivated in many temperate regions all over the world. Chief producers of raspberries are Poland, United States, Germany, and Chile.

Technically, the whole berry is an aggregate of small drupe-lets, which are arranged in circular fashion around a hollow central cavity. Each tiny drupelet features small juicy pulp with a single whitish-yellow seed. Raspberries have a taste that varies by cultivar, and ranges from sweet to acidic, a feature quite similar to strawberries.

Raspberry has a conical shape, weighs about 3-4 g and contains 80-100 drupelets arranged in circular layers. While the most common type of raspberry (Rubus idaeus) is red-pink in color, hybrids actually come in a range of colors, including black, purple, orange, yellow and white. 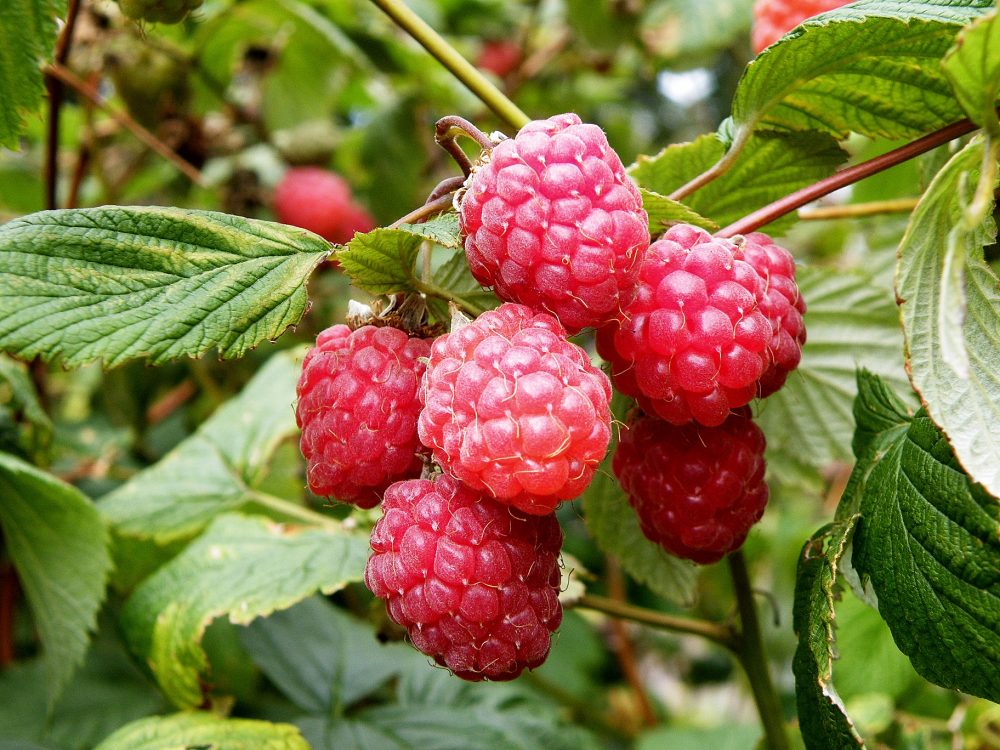 Delicious raspberries are low in calories and saturated fats but are rich source of dietary fiber and antioxidants. 100 g berries contain just 52 calories but provide 6.5 g of fiber (16% of daily recommended intake).

Xylitol is a low-calorie sugar substitute extracted from raspberries. A teaspoonful of xylitol contains just 9.6 calories as compared to that of sugar, which has 15 calories. Xylitol absorbs more slowly in the intestines than sugar and does not contribute to high glycemic index, and thus, can be helpful in diabetics.

Fresh raspberries are an excellent source of vitamin-C, which is also a powerful natural antioxidant. 100 g berries provide 26.2 mg or about 47% of DRI of vitamin C. Consumption of fruits rich in vitamin C helps the body develop resistance against infectious agents, counter inflammation, and scavenge harmful free radicals.

Raspberry contains anti-oxidant vitamins like vitamin A, and vitamin E. In addition to the above-mentioned antioxidants, is also rich in several other health promoting flavonoid poly phenolic antioxidants such as lutein, zea-xanthin, and ß-carotene in small amounts. Altogether, these compounds help act as protective scavengers against oxygen-derived free radicals and reactive oxygen species (ROS) that play a role in aging and various disease processes.

Raspberry has an ORAC value (oxygen radical absorbance capacity) of about 4900 per 100 grams, crediting it among the top-ranked ORAC fruits.

Raspberries contain a good amount of minerals like potassium, manganese, copper, iron and magnesium. Potassium is an important component of cell and body fluids that helps controlling heart rate and blood pressure. Manganese is used by the body as a co-factor for the antioxidant enzyme, superoxide dismutase. Copper is required in the production of red blood cells.

They are rich in B-complex group of vitamins and vitamin K. The berries contain very good amounts of vitamin B-6, niacin, riboflavin, and folic acid. These vitamins are function as co-factors and help body in the metabolism of carbohydrates, protein and fats. 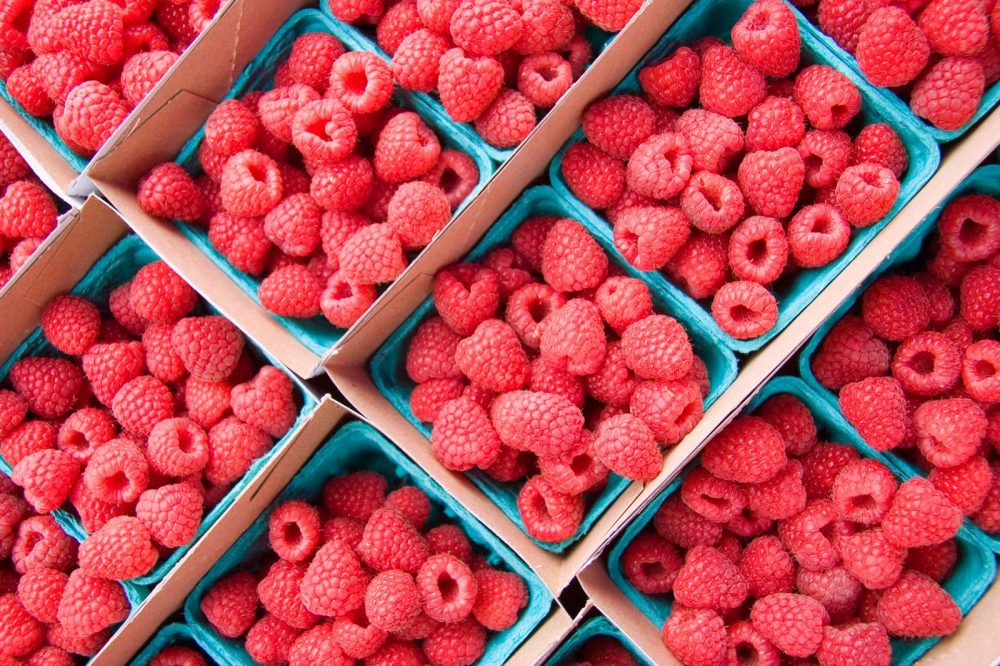 One of the most fascinating new areas of raspberry research involves the potential for raspberries to improve management of obesity. Although this research is in its early stages, scientists now know that metabolism in our fat cells can be increased by phytonutrients found in raspberries, especially rheosmin (also called raspberry ketone). By increasing enzyme activity, oxygen consumption, and heat production in certain types of fat cells, raspberry phytonutrients like rheosmin may be able to decrease risk of obesity as well as risk of fatty liver. In addition to these benefits, rheosmin can decrease activity of a fat-digesting enzyme released by our pancreas called pancreatic lipase. This decrease in enzyme activity may result in less digestion and absorption of fat.

You’ll get significantly more antioxidant support by purchasing raspberries that are fully ripe. Recent studies have measured the total phenolic content, total flavonoid content, and anthocyanin content of raspberries harvested at varying stages of ripeness (from 50% to 100% maturity) and greatest overall antioxidant benefits were associated with full ripeness of the berries. Although it’s possible for raspberries to ripen after harvest, this fruit can be highly perishable and can mold quite easily at room temperature. So your most risk-free approach for getting optimal antioxidant benefits from raspberries is to purchase them at full maturity, keep them refrigerated at all times at temperatures between 35-39°F (2°-4°C), and consume them very quickly (within 1 to 2 days after purchase). 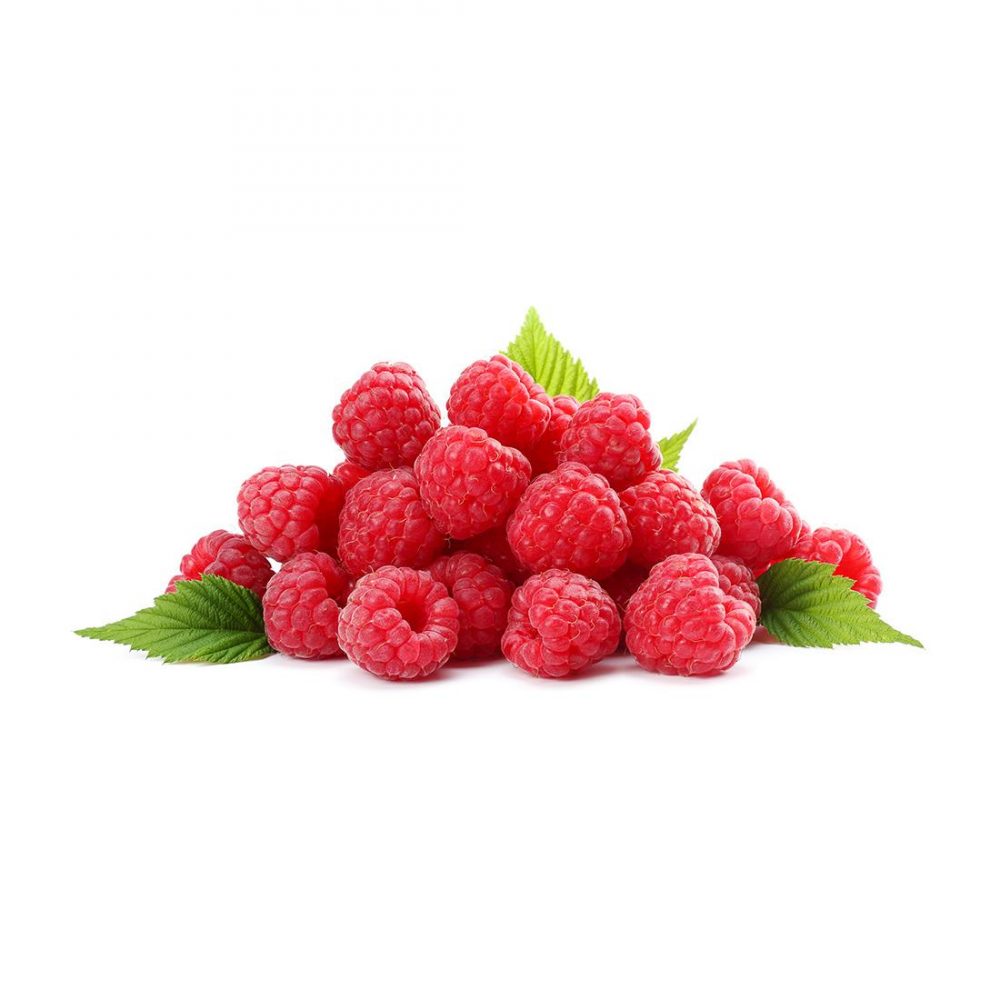 The diversity of antioxidant and anti-inflammatory phytonutrients in raspberries is truly remarkable, and few commonly eaten fruits are able to provide us with greater diversity.

From a research perspective, here is a partial list of phytonutrients in raspberries that provide us antioxidant and anti-inflammatory benefits:

The vast majority of these phytonutrients are not only provided by raspberries, but provided in amounts that are significant in terms of protecting us against the dangers of oxidative stress and the dangers of excessive inflammation. By helping to scavenge free radical molecules, and by helping to regulate the activity of enzymes that could trigger unwanted inflammation, the phytonutrients in raspberries help lower our risk of chronic diseases that are associated with chronic oxidative stress and chronic inflammation. These chronic diseases include obesity, type 2 diabetes, hypertension, and atherosclerosis.

The ellagic acid found in raspberries deserves special mention as an anti-inflammatory compound. This phytonutrient has been shown to help prevent overactivity of certain pro-inflammatory enzymes (including cyclo-oxygenase 2, or COX-2) as well as their overproduction. In animal studies, intake of ellagic acid has been shown to reduce numerous aspects of unwanted and excessive inflammation, including aspects associated with Crohn’s disease. 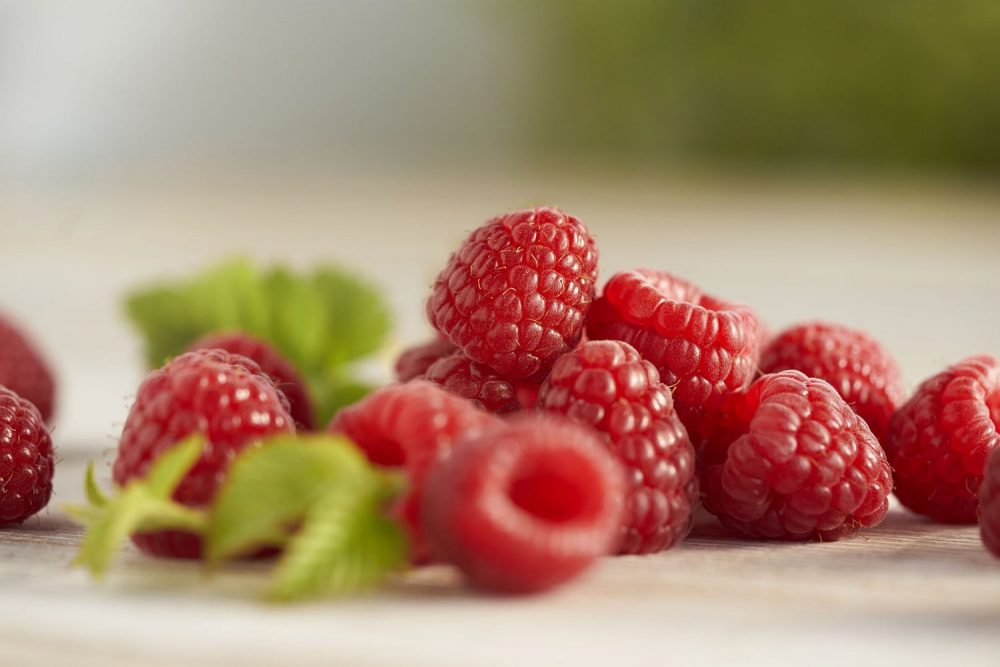 Perhaps the most fascinating new areas of research on raspberries involve management of obesity and type 2 diabetes. In the case of obesity, two compounds in raspberries have received special focus: raspberry ketone (also called rheosmin) and a type of flavonoid called tiliroside.

Raspberry ketone is a compound that naturally occurs in raspberries, but unlike its name suggests, it is by no means exclusive to this fruit. Raspberry ketone is contained in a wide variety of plants, although not usually in such sizable amounts as are found in raspberries. Turkish rhubarb is one such plant. Larch, yew, maple, and pine are trees that contain amounts of raspberry ketone, and in some studies, pine needles have been used as a source of this compound for experimental purposes.

The chemical name for raspberry ketone is 4-(4-hydroxyphenyl) butan-2-one. Researchers are equally familiar with raspberry ketone under the name of rheosmin, and since 1965, it’s been included on the Food and Drug Administration’s (FDA’s) Generally Recognized As Safe (GRAS) list as an approved food additive. The primary use of rheosmin as a food additive has been for flavor and aroma.

The rheosmin found in raspberries can increase metabolism in our fat cells by increasing enzyme activity, oxygen consumption, and heat production in certain types of fat cells. By boosting fat metabolism in this way, we may be less likely to deposit fat in our fat cells, and we may be able to use up some of the fat that is stored there. By improving our fat cell metabolism, we may also be able to reduce the number of pro-inflammatory messaging molecules that are produced by our fat cells. As a result, we may be less likely to experience some of the inflammation-based problems that typically accompany obesity.

In addition to these benefits, rheosmin found in raspberries can also decrease activity of a fat-digesting enzyme called pancreatic lipase that is produced by our pancreas. By decreasing the activity of this enzyme, we may digest and absorb less fat—another potential plus when trying to deal with the consequences obesity.

In addition to the rheosmin found in raspberries, scientists have also focused on the obesity-related benefits of a second compound called tiliroside. Tiliroside is a type of flavonoid (called a glycosidic flavonoid) that is found in many plants of the rose family, including rose hips, strawberries, and raspberries. In preliminary studies, tiliroside has been show to activate a special hormone called adiponectin that is produced by our fat cells. (The “adipo” part of this word means “fat,” which is also why our fat cells are also called “adipocytes.”)

Within this context of obesity and blood sugar regulation, another aspect of raspberry phytonutrients has captured the attention of researchers involving the ability of raspberry extracts to block activity of an enzyme called alpha-glucosidase. Alpha-glucosidase is a starch-digesting enzyme, and when it becomes active in the digestive tract, it increases the breakdown of starches into sugars. These sugars get absorbed up into the bloodstream and can cause excessively high levels of blood sugar following a meal. (This process is called postprandial hyperglycemia.) By blocking activity of alpha-glucosidase, raspberry extracts may make it possible for persons with type 2 diabetes (or obese persons experiencing problems with blood sugar regulation) to better manage their blood sugar levels.

We’ve been asked about the exact glycemic idex (GI) value for raspberries, and unfortunately, have not been able to find food research substantiation for any exact value. We’ve seen estimates for many berries that fall into the 40-50 GI range, and for most researchers, that would place them in the low GI category. Since one cup of fresh raspberries provides about 15 grams of total carbohydrates and only 5-6 grams of sugar (compared with 8 grams of dietary fiber), a modest serving of fresh raspberries (for example, 1/2 cup) is likely to be a very good fit in most diets, even diets focused on stabilization of blood sugar.

Given the rich antioxidant and anti-inflammatory phytonutrient mixture found in raspberries, it’s not surprising to see studies showing raspberry benefits in cancer prevention.

Chronic excessive oxidative stress and chronic excessive inflammation can combine to trigger the development of cancer cells in a variety of human tissue. By providing a rich supply of antioxidants, raspberries can help lower risk of oxidative stress, and providing a rich supply of anti-inflammatory nutrients, raspberries can help lower the risk of excessive inflammation. When combined, these results mean decreased risk of cancer formation. In animal studies to date, the cancer types most closely examined in relationship to raspberry intake are cancers of the breast, cervix, colon, esophagus, and prostate.

Recent studies suggest that the anti-cancer benefits of raspberries may extend beyond their basic antioxidant and anti-inflammatory aspects. Phytonutrients in raspberries may also be able to change the signals that are sent to potential or existing cancer cells. In the case of existing cancer cells, phytonutrients like ellagitannins in raspberries may be able to decrease cancer cell numbers by sending signals that encourage the cancer cells to being a cycle of programmed cell death (apoptosis). This signaling is likely to involve activity of the p53 protein that is typically classified as a tumor suppressor protein.

The role of the a protein complex called nuclear factor kappa B (NFkB) is likely to be involved in this set of events.