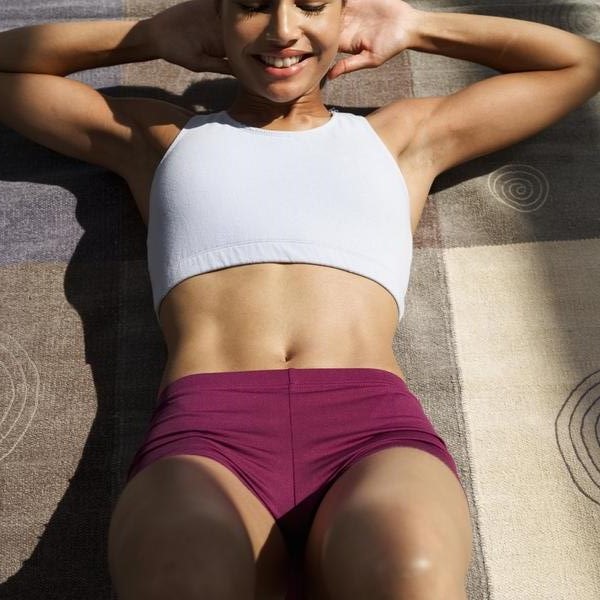 If you are doing abdominal exercises in the hope of getting a strong core and a flat stomach, you aren’t alone. Ab exercises are some of the most popular exercises for both novice and elite athletes. However to get a flat belly and defined abs it takes more than just crunches. You also need to reduce the layer of body fat covering up your well-defined abs.

Crunches can only tone the abs. They cannot get rid of the fat layer that lies on top of the ab muscles. And the only way to lose the fat is to do some form of vigorous aerobic exercise like skipping, jogging, cycling and so on for no less than 30 minutes 3-4 times a week. These exercises are a must rather than an option because they help increase the metabolic rate, causing your body to use up all stored forms of energy, in short, your fat. Aerobics exercises target specific areas of body fat, weight training increases the body’s overall metabolic rate, so in a way it enhances the action of aerobics.

2. Crunches Are Just One Form Of Ab Exercise

What you need to do is a series of exercises that work all the muscles in the abs (the rectus abdominis and obliques) from different angles. There are three so-called “Places of motion”. When you bend forward, you work the sagittal plane. Bend to the side and you target the frontal plane. Twist your torso and you hit the transverse plane. A basic crunch only work your muscles through one plane of motion – sagittal – which is why you can do them forever and only see a third of the results. Of course, don’t give upon crunches. Incorporate moves that hit the other two angles and your abs will be much leaner. Even if you’ve got a fantastic workout, you still need to vary your moves every few weeks. The longer you stick with an exercise programme, the more efficient your body becomes at doing it You end up using less energy and burning fewer calories, and you won’t get optimal results. Research shows muscles can adapt in as few as four to five workouts.

A new weight loss supplement that is currently growing very popular is using CBD oil derived from hemp. CBD is the non-psychoactive compound in hemp that has numerous health benefits, a few being increasing your ratio of brown type fat tissue (which means burning more fat) as well as being a potent anti-inflammatory, increasing metabolism and reducing appetite.

Keeping your muscles from getting bored doesn’t mean scrounging up an all-new routine, either Constantly making small tweaks to the same moves is enough. For example, instead of placing your hands by your ears when you do crunches, try extending your arms in front of you or do oblique twists on an incline bench rather than the floor.

Exercising while holding a weighted ball or dumbbell is another way to switch things up once you get stronger. Use enough weight so that you can’t do more than 15 to 20 reps at a time.

4. There Is Such A Thing As A Beer Belly

Any alcoholic drink can add to the size of your stomach for one very simple reason: Alcohol is dense in calories. Every gram of alcohol contains the same amount of calories as a gram of butter – seven which almost twice as many as a gram of most other carbohydrates or protein. Like other calorie-packed foods. It promotes weight gain.

But there’s also evidence that beer, more than other kinds of alcohol, may cause more fat to settle on your belly. Research at the University of North Carolina at Chap I Hill found that among those who had more than six drinks a week, beer drinkers had the highest waist-to-hip-ratio followed by those who who opted for liquor. Wine drinkers had the slimmest waistlines. 5. Jogging Is Great-But Watch Out For “Runner’s Pooch”

During an average run, your body weight rests on one or the other leg about 80 per cent of the time. To maintain balance, your stomach muscles (particularly your lower abs) must stay contracted. They also help hold your torso (which amounts to two thirds of your total body weight) upright as you exercise. Running burns a lot of calories, too – 490 to 1,103 an hour, depending on how fast you go.

The problem with running is that it can work your hip flexors and erector spinae (your lower back muscles) to a greater degree than your abs, If you don’t make an effort to stretch these areas, you could develop an imbalance, known as excessive anterior pelvic tilt. This condition, which is more common in women, makes your hips and back so tight that your spine arches into a C shape, causing your belly to pitch forward. The result: Your stomach looks larger than it really is.

The best solution is to stretch these spots for at least five minutes after every run. To loosen the hip flexors, stand with your left leg forward, right leg back, feet about 2 feet apart: gently tilt your pelvis forward: hold the stretch for 30 seconds. Switch legs and repeat. A good lower-back looser is to lie face up, legs extended, arms out at sides. Bend your right knee and place your foot on the floor; rest left hand on right knee and slowly lower your knee to the left as far as you can as you twist your torso to the right hold for 30 seconds. Switch legs and repeat.

6. You Can Age Proof Your Abs

After age 30, each one of us experiences metabolic slowdown and tend to gain, on average, a half pound a year. Why? Most of us continue eating the same number of calories, but burning fewer. In men most fat lands on the belly; in women on the hips and thighs. By late 30s though, a woman experiences fluctuating levels of estrogen and progesterone change where her body stores fat – and more of it goes to her middle.

The solution for both sexes; eat less, exercise more, or both. Aim to eat about 200 calories less per day and burn 250 more calories through exercise after you turn 30. These small, achievable changes will help balance things out. Another age-related factor: After age 25, we all lose, about a half pound of muscle each year unless we step up strength-training routine. Since muscle burns more calories (35 to 45 more per pound) than fat. If you lose a half pound of muscle, your body will burn 7,200 fewer calories a year – which equals an annual weight gain of more than 2 pounds a year. What does that have to do with your abs?. Research at Ball State University in Muncie. Indiana, found that exercisers who followed a six-months strength and cardio programme saw a 12 per cent drop in abdominal fat. Strength-training is also known to boost metabolism. Your best bet for staying strong and slim is to lift weights two or three times a week for at least 20 minutes. A week before a woman gets her period, her body starts producing extra progesterone. This hormone causes her to retain fluids – a natural response that’s designed to prepare the body to carry a baby, which is why much of it shows up around her middle. As soon as the body realizes it’s not pregnant and her period starts, progesterone levels drop and the excess water is released through urine.

High progesterone levels can also negatively affect a woman’s mood and body image, according to studies – so not only do you look bloated, you also feel bloated. It’s the ultimate double whammy. Watching what you eat (since hormones can make some women hungrier than usual) and exercising will help you feel better until your hormone levels even out again.

It’s true, that poor abdominal tone and fat aren’t the only culprits behind a protruding belly. Good-for-you foods like beans, fruits and vegetables all contain complex sugars called oligosacharides that you body can’t readily digest. In many people, these sugars produce intestinal gas that can enlarge your stomach for up to 24 hours after you eat them – particularly if you’re not used to eating a lot of produce. The solution? Monitoring your diet carefully and cutting back on foods that create bloat may help prevent distention. In about a week, any bulge should vanish and the long-term health benefits will remain.
Remember, eating these foods is till better than the alternative: a high-fat diet. In the meantime, try over-the-counter products like Gas X or Eno salts when you eat suspect items. Lactose intolerance, excess carbonation from colas and even mild food allergies can also fill your stomach with gas.

How you eat is also an issue. Chewing your food fast and inadequately can cause you to swallow air, which can end up collecting in your digestive tract, affecting stomach size. Women who constantly eat on the go are especially prone to this. Eat slowly and chew food thoroughly.

9. Stress Shows Up On Your Belly

Being stressed can actually prompt your body to store fat in your stomach. A study conducted at Yale University found that of the 160 female participants, the ones who reported the highest levels of chronic stress had the biggest waistlines. Researchers suspect that excess amounts of the stress hormone cortisol promotes your body to pad your waistline, because the fat cells in this area have more receptors for cortisol than any other cells in the human body. To help keep stress levels (and your stomach) in check, cut back on known cortisol elevators, such as smoking, drinking and lack of sleep. Exercising, listening to classical music, deep breathing and having a good laugh have also been proven to instantly lower your body’s levels of this hormone. 10. Sucking It In Is Actually Smart

It looks like cheating, but holding in your belly actually works a core muscle deep in your lower back called the transverse abdominis, which can permanently improve your appearance.

This muscle acts as a natural weight belt, supporting your lower back and keeping your pelvis aligned. In effect it eliminates posture problems that may be causing you to slouch and seem paunchier than you really are. It’s also one of the few exercises you can do all day long. You can’t exactly do crunches at your desk, but you can pull your abs in anytime, anywhere. Another relatively easy and effective way of tightening the abdominal muscles is Pranayam, “The deep abdominal breathing exercise works the abdominal muscles without any physical exertion:. The other benefits include stronger lungs, good breathing technique and better concentration.

Finally, The two Ps are important in getting rid of a belly – Patience and Perseverance. 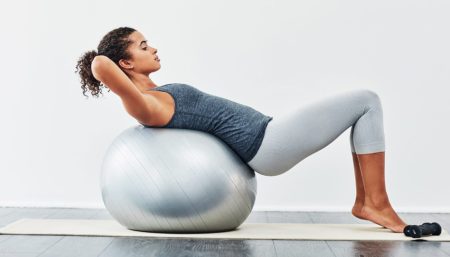 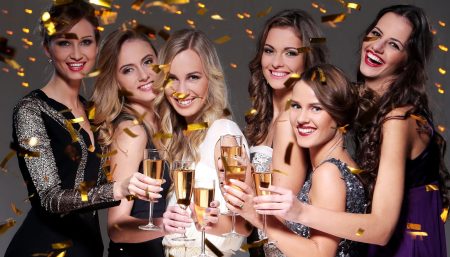 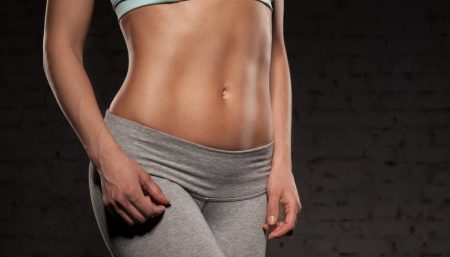 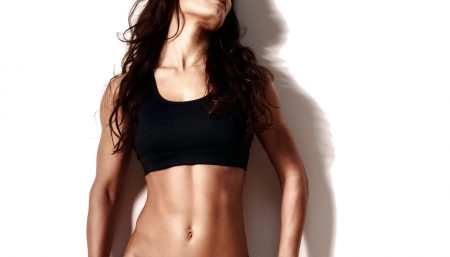