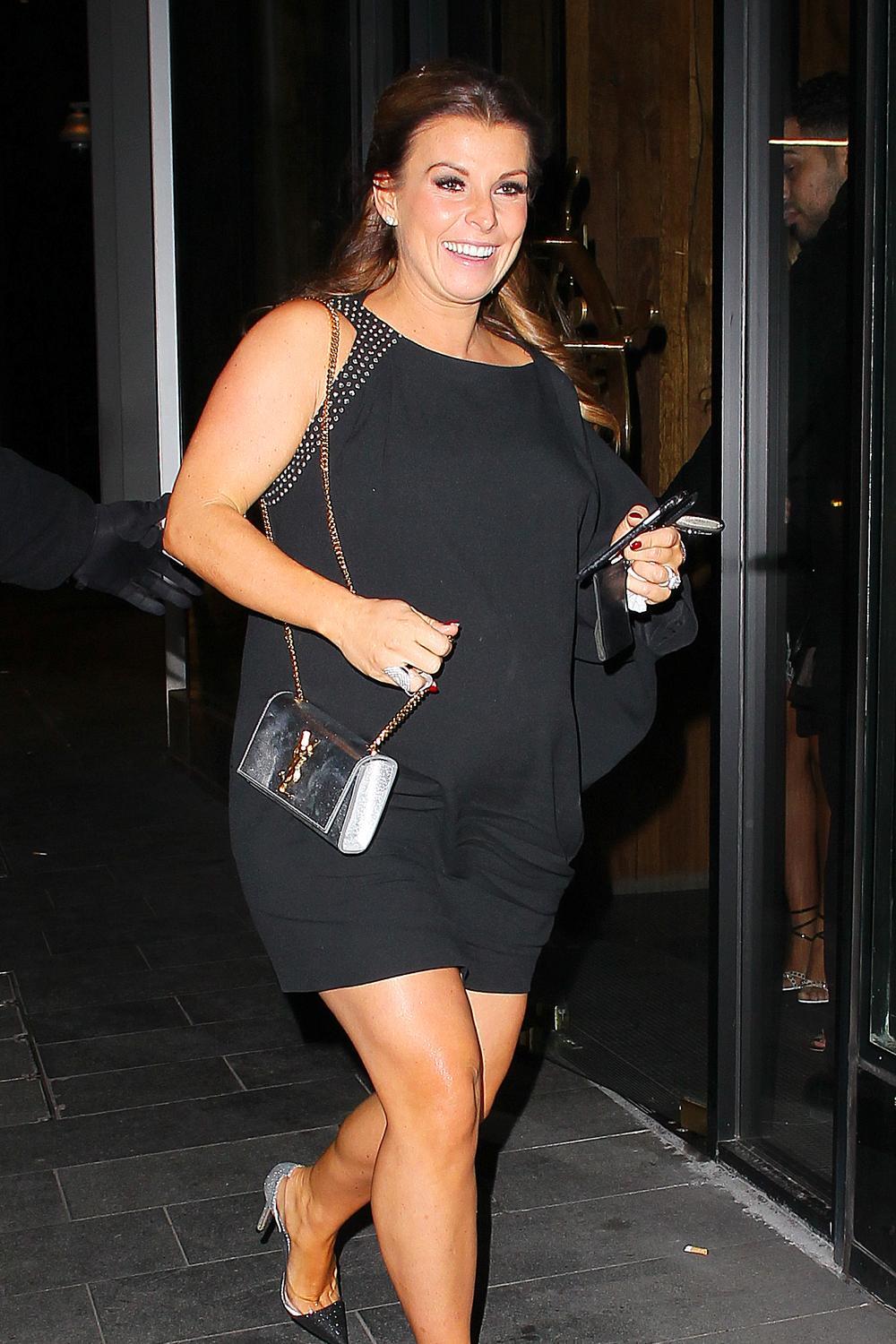 Coleen Rooney husband Wayne has played for Manchester United since 2004 and has enjoyed a close relationship with manager Sir Alex Ferguson during that time.

So it was no surprise that on Sunday Coleen Rooney and her son Kai were on hand to watch Fergie’s final home game against Swansea with Wayne, who was not included in the squad. And not letting the fact she is about to pop get in the way of her WAG duties the 27-year-old even wore the colour red, as did her little boy. Unconcerned about the rain the clothes designer clad her bump into a tight red dress which was the perfect item to show off her pregnancy.

She teamed the dress with a floral jacket and black leggings, while she completed her look with a red Chanel bag that finished off her tribute. Kai meanwhile was also wearing red in tribute to his father’s manager and wore a red raincoat with a pair of little red football boots. Not only was it Sir Alex’s final game but Wayne, who was not included in the game, was receiving his fifth league trophy. Ahead of the game he tweeted: ‘Looking forward to today’s game. Excited to lift the trophy and receive my 5th league medal.’

While Coleen was equally excited, writing: ‘Good morning!!! Awake bright and early. Kai is so excited to see Daddy get the trophy and his medal today.’

Sir Alex Ferguson received a thunderous applause as he walked out during the home game after 27 years as boss. The 71-year-old Manchester United manager, who has overseen a whopping 13 Premier League title successes as well as two Champions League victories, announced his retirement last week. Sir Alex stated in Sunday’s programme notes: ‘I must pay tribute to my family. Their love and support has been essential.

‘My wife Cathy has been the key figure throughout my career, providing a bedrock of stability and encouragement. I would like to thank them all for a staggering level of professional conduct and dedication. ‘Their backing and Sir Bobby Charlton in particular gave me the confidence and time to build a club rather than just a team.

‘The Glazer family have provided me with the platform to manage Manchester United to the best of my ability. And I have been fortunate to work with a talented and trustworthy chief executive in David Gill.’

The move by Sir Alex to leave out Rooney – who was sold to United from Everton by Moyes in 2004 – has increased speculation that the striker could be on his way out of the club. Earlier this week Coleen was forced to take to Twitter to tell followers not to Tweet her but her husband if they had a query about his next move.