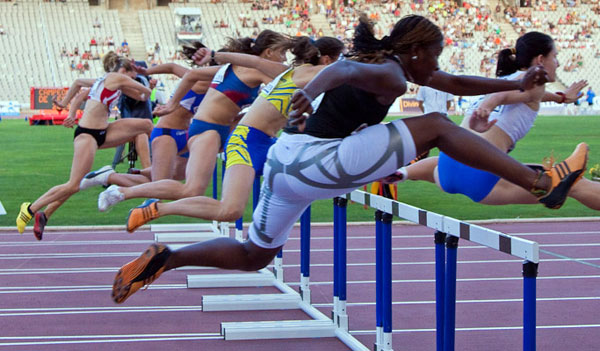 Elite runners do not experience the muscle weakening associated with aging as non-athletes do. A new study published in American Journal of Physiology — Cell Physiology examines if their superb fitness is because their muscles have not aged.

Movement and strength come from the muscle fibers that make up a muscle group contracting and generating tension. Muscle weakening happens when the fibers contract slower and with less force. A team of Canadian researchers hypothesized that the constant physical training of older elite runners preserved their muscle fibers such that the fibers behaved like those of young adults.

Muscle fiber samples were taken from the quadriceps of older elite runners and non-athlete adults in the same age range. “One of the most unique and novel aspects of this study are the exceptional participants,” says lead author Geoff Power of University of Guelph in Canada. “These are individuals in their 80s and 90s who actively compete in the world masters track and field championships. In the study, we had seven world champions, and everyone placed in the top four of their respective events.”

This study suggests that aging is associated with decreased muscle quality regardless of physical activity status, according to Power. However, other studies have shown that muscle fibers can be arranged in a variety of ways to optimize strength, speed and power of the whole muscle, Power says, so there are many structural ways to compensate for the reduced performance at the fiber level to maintain performance at the whole muscle level.

Researchers from McGill University, University of Calgary and University of Quebec at Montreal were also involved in the study. The article “Reduction in single muscle fiber rate of force development with aging is not attenuated in world class older masters athletes” is published ahead-of-print in American Journal of Physiology — Cell Physiology.