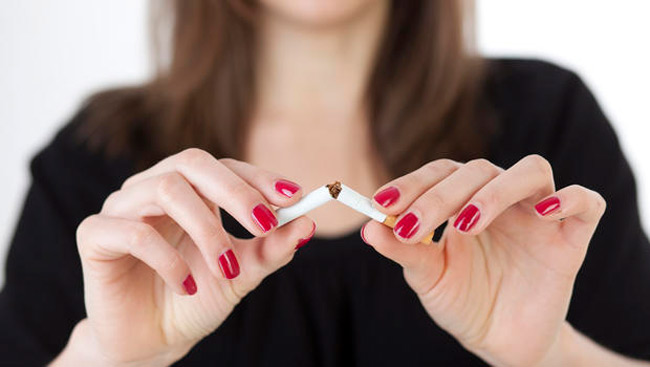 Women who want to quit smoking may have better success by carefully timing their quit date with optimal days within their menstrual cycle, according to a new study from researchers at the Perelman School of Medicine at the University of Pennsylvania. The results, published online this month in Biology of Sex Differences, were also presented at the annual meeting of the Organization for the Study of Sex Differences (OSSD), held at Penn.

Cigarette smoking remains the leading cause of preventable death in the United States, and women experience more severe health consequences from cigarette smoking than men, including a 25 percent increased risk of developing coronary heart disease and chronic obstructive pulmonary disease. Research also shows that women have greater difficulty with smoking cessation than men.

Wetherill and senior author Teresa Franklin, PhD, a research associate professor of Neuroscience in Psychiatry, have been studying the brains of premenopausal women who smoke cigarettes for several years in Penn’s Center for the Studies of Addiction. Their work is based on a significant animal literature showing that the natural sex hormones — estrogen and progesterone — which fluctuate over the course of the menstrual cycle modulate addictive behavior. The animal data show that during the pre-ovulatory, or follicular phase of the menstrual cycle, when the progesterone-to-estrogen ratio is low, women are more likely to be spurred toward addictive behaviors. Alternatively, during the early pre-menstrual or luteal phase of the menstrual cycle, when the progesterone-to-estrogen ratio is high, addictive behaviors are thwarted, suggesting that progesterone might protect women from relapsing to smoking.

The researchers theorized that the natural fluctuations in ovarian hormones that occur over the course of the monthly menstrual cycle affect how women make decisions regarding reward — smoking a cigarette — and so-called “smoking cues,” which are the people, places and things that they associate with smoking, such as the smell of a lit cigarette or going on their coffee break. These “appetitive reminders” to smoke are perceived as pleasant and wanted, and similar to cigarettes, are also rewarding.

In 2015, the researchers showed that compared to when women are in the luteal phase of their menstrual cycle, which is the period of time following ovulation and prior to menstruation, women in the follicular phase — which begins at menstruation and continues until ovulation — have enhanced responses to smoking cues in reward-related brain regions. This finding led them to further test whether groups differed in the strength of the functional connections that exists between regions exerting cognitive control and reward-related brain regions. The weaker the functional connections between cognitive control brain regions and reward signaling brain regions, the less ability women have to ‘Just Say No’ when attempting to quit.

The women in the study were separated into two groups — those in their follicular phase and those in their luteal phase. Results revealed that during the follicular phase, there was reduced functional connectivity between brain regions that helps make good decisions (cortical control regions) and the brain regions that contain the reward center (ventral striatum), which could place women in the follicular phase at greater risk for continued smoking and relapse. Orienting attention towards smoking cues (pictures of smoking reminders such as an individual smoking) was also shown to be associated weaker connections between cognitive control regions in follicular females.

“These data support existing animal data and an emerging human literature showing that progesterone may exert protective effects over addictive behavior and importantly, the findings provide new insights into sex differences in smoking behavior and relapse,” Franklin said. “Interestingly, the findings may represent a fundamental effect of menstrual cycle phase on brain connectivity and may be generalizable to other behaviors, such as responses to other rewarding substances (i.e., alcohol and foods high in fat and sugar).

“The results from this study become extremely important as we look for more ways to help the over 40 million individuals in the U.S. alone addicted to cigarettes,” Franklin, continued. “When we learn that something as simple as timing a quit date may impact a woman’s cessation success, it helps us to provide more individualized treatment strategies for individuals who are struggling with addiction.”