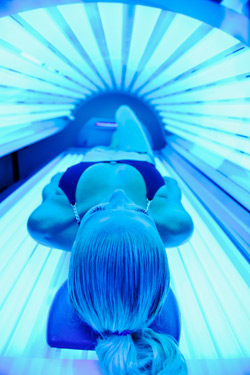 Indoor tanning rates dropped among adults from 5.5 percent in 2010 to 4.2 percent in 2013, although an estimated 7.8 million women and 1.9 million men still engage in the practice, which has been linked to increased cancer risk, according to the results of a study published online in a research letter by JAMA Dermatology.

Gery P. Guy Jr., Ph.D., M.P.H., of the Centers for Disease Control and Prevention, Atlanta, and coauthors analyzed data for 59,145 individuals from the 2010 and 2013 National Health Interview Survey, a nationally representative sample of U.S. adults.

The authors suggest the decrease in indoor tanning may be partly attributable to increased awareness of its harms as indoor tanning devices have been classified as carcinogenic to humans, laws restricting access by minors have been enacted and a 10 percent excise tax on indoor tanning has been implemented.

The authors caution a causal inference cannot be made between behaviors and the frequency of indoor tanning from their data.

“Research regarding the motivations of indoor tanners could inform the development of new interventions. Physicians can also play a role through behavioral counseling, which is recommended for fair-skinned persons aged 10 to 24 years. Continued surveillance of indoor tanning will aid program planning and evaluation by measuring the effect of skin cancer prevention policies and monitoring progress,” the study concludes.