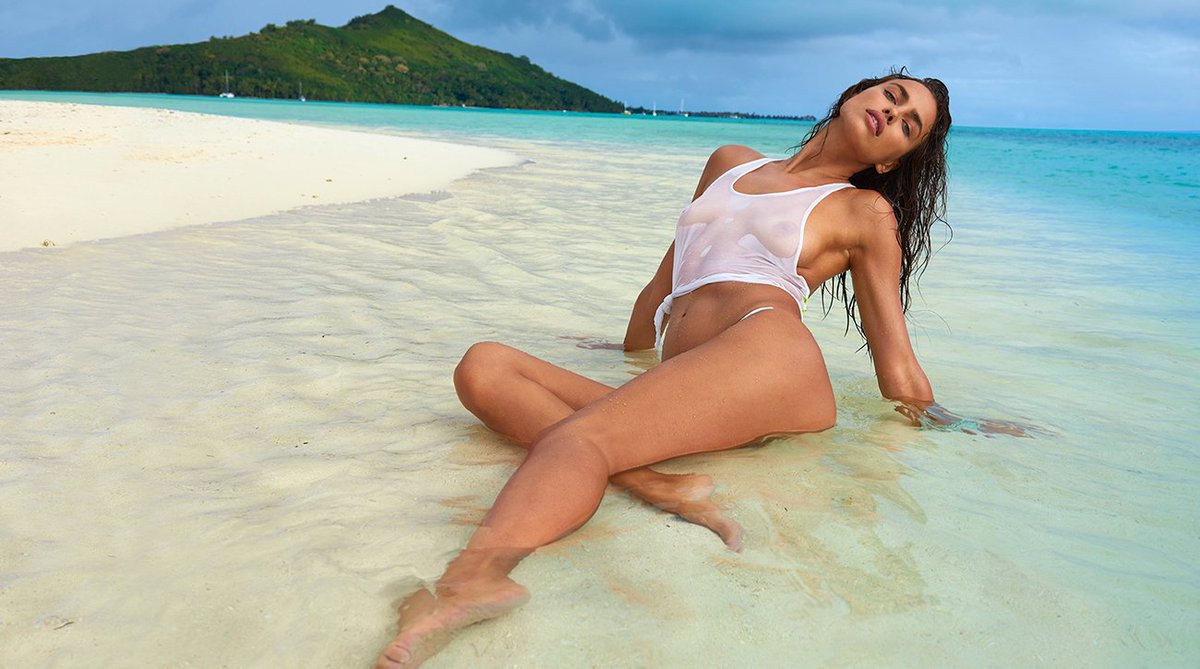 Hollywood superstar Bradley Cooper and his model girlfriend Irina Shayk were enjoying their vacation in Italy. While spending their time together on the Amalfi Coast, the two were spotted sharing kisses, reported Ace Showbiz.

The “American Sniper” actor, 40, showed off his muscular body in orange shorts and black swim goggles. Meanwhile, the Victoria’s Secret model looked sensuous in a mismatching two-piece bikini, flaunting her model figure. She completed her look by putting her hair in a ponytail.

The hot couple was photographed sharing a kiss. The two were also seen joking with each other before swimming together around the shoreline. Cooper started dating Shayk after he broke up with Suki Waterhouse in March. The two were first romantically linked when they were seen in the audience of Broadway’s “Finding Neverland” back in April.
The two have since been caught on camera getting engaged in passionate PDA on a number of occasions.

Irina Shayk sometimes credited as Irina Sheik born Irina Valeryevna Shaykhlislamova, is a Russian model and actress known for her appearances in the Sports Illustrated Swimsuit Issue between 2007 and 2015. She was the cover model for the 2011 issue.

Shayk was born in Yemanzhelinsk, Russia, to Valery Shaykhlislamov, a coal miner, and his wife Olga, a kindergarten music teacher. She has one sibling, a sister named Tatiana. Shayk started playing piano at age six. At age nine she enrolled in a music school and studied there for seven years, both playing the piano and singing in the choir, since her mother wanted her to study music. Her father died of complications of pneumonia when she was 14, leaving her family with little money and forcing her mother to work two jobs to provide for the family.

After high school, Shayk studied marketing but failed it and entered a beauty school with her older sister. While there, she was noticed by a person from a local modeling agency who was struck by her beauty. She was urged to participate in the “Miss Chelyabinsk 2004” beauty contest and she won.

In 2007, she replaced Ana Beatriz Barros as the face of Intimissimi, and in the same year debuted in the annual Sports Illustrated Swimsuit Issue. Since that time, she has appeared in every annual edition, attending photoshoots in such places as St. Petersburg, Naples, Grenada and Chile.

After being the image of Intimissimi for three years, Shayk was made the official ambassador for the brand in 2010. Her other modeling contracts include Beach Bunny Swimwear (2009), and Guess spring/summer 2009. Other work include the Victoria’s Secret catalog, Lacoste, Cesare Paciotti and Morellato. Her magazine covers include Annabelle, Bolero, Woman, Twelv, Jalouse, and Paris Capital. She signed with modeling agency IMG on May 2009. 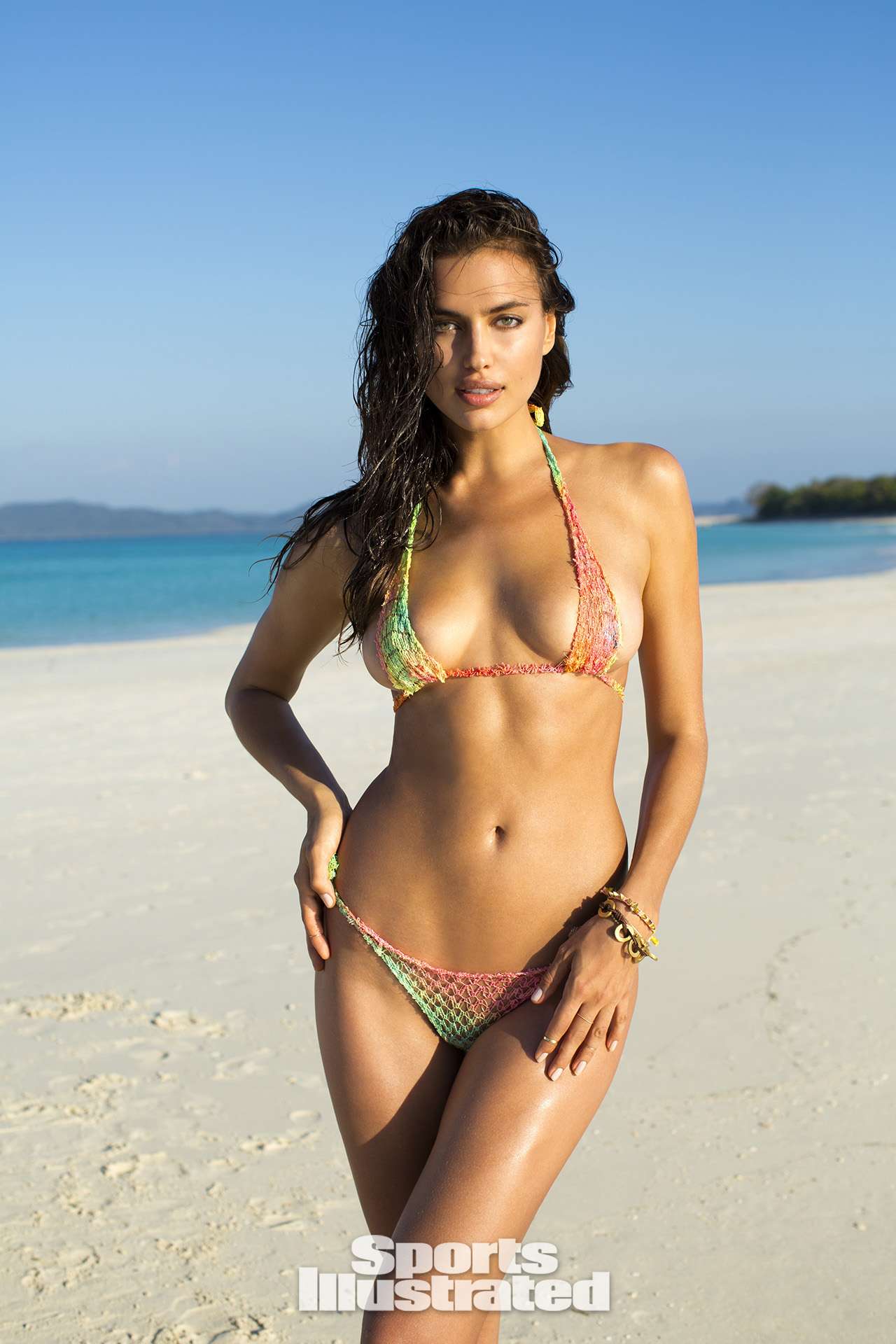 Shayk modeled the Armani Exchange spring/summer 2010 campaign. She also starred in Kanye West’s “Power”, directed by artist Marco Brambilla. She was on the cover of Ocean Drive and GQ South Africa for the August issue.She ranked first in the “50 Hottest Russian Women” list by Complex magazine.

She made a change from swimwear to high fashion with a spread in Spain’s Harper’s Bazaar and landed the cover of Elle Spain for their November 2010 issue. Glamour Spain awarded her “Best International Model of 2010”.(Spanish: Mejor Modelo Internacional). At the end of the year she was pictured nude in the GQ Spain December issue; however, she claimed that she had not stripped for the photoshoot, and that the magazine had digitally altered the images to remove her lingerie.

On the February 14, 2011 episode of the Late Show with David Letterman, it was revealed via billboard that Shayk was the covermodel for the 2011 Sports Illustrated Swimsuit Issue. This is the fifth time she has been featured in the magazine, but the first time she has been on the cover. She is the first Russian to appear on the cover. Shayk became the face of swim label Luli Fama’s 2011 advertising campaign and look book. She also appears in the John John Denim ad campaign. In 2011 she covered magazines such as Tatler Russia, Twelv, Cosmopolitan Spain, GQ Mexico Glamour Spain, Amica Italy and appeared on the covered of Elle Spain the special edition for Christmas. She also worked for many brands like Rampage, replacing Bar Refaeli, Replay and XTI. She currently ranks 14th in the “Top 20 Sexiest Models” list on Models.com. The same year she was voted “Sexiest Woman In The World” in the Hungarian magazine Periodika.

In 2012 she covered Esquire UK, Harper’s Bazaar Arabia and Ukraine, Marie Claire Ukraine,Spain and Russia, GQ Germany, Glamour Russia and appeared on 14 Cosmopolitan spring covers worldwide. She also covered S Moda Spain and The Sunday Time Style UK. She also did an editorial for Vanity fair Italy The same year, she has appeared in campaigns for Morellato, Agua Bendita and Blanco. Shayk is also the new face of the brand La Clover and of Avon super drama mascara. In September 2012 she covered L’express Styles magazine, and worked with Mariano Vivanco. In November, Shayk covered Twelv Magazine, Second Issue with supermodel Anne V. In the same month she appeared in an editorial for Vogue Spain December issue working with Mario Testino.

In February 2013 she covered Vs. Magazine with Anne V and the same month she did an editorial for CR Fashion book issue 2 photographed by Bruce Weber and styled by Carine Roitfeld. The same month she did the runway of Jeremy Scott during the New York fashion week. In March 2013 she did the runway of Givenchy during the Paris fashion week. Also in 2013, Shayk featured several times in Harper’s Bazaar US. She featured for the second time in CR fashion book issue 3. In September, she covered Allure Russia. She was also the cover model of Vogue Spain, landing her first Vogue cover photographed by Giampaolo Sgura.

Shayk made her acting debut as Megara alongside Dwayne Johnson in the 2014 film Hercules. Shayk is helping a maternity hospital in her hometown of Yemanzhelinsk. She and her sister helped rebuild the children’s ward of the local hospital, and now Shayk raises money on behalf of a Russian charity, Pomogi, which provides care to sick children. Shayk is the official ambassador for Pomogi charity in Russia. Shayk has a pet dog named Caesare, after Julius Caesar, a Labrador which she claims was fathered by one of the dogs who played the title role in the film Marley & Me.

Irina Shayk is rated as sexiest woman in the world recently revealed her beauty and workout secrets to Namita Nayyar President Women Fitness. Check her out at: http://www.womenfitness.net/irinaShayk_secrets1.htm.