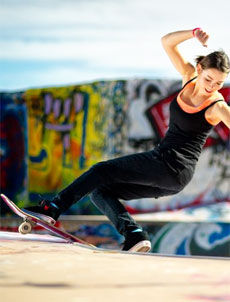 BOSTON, MA ( Ivanhoe Newswire) — While the summer Olympics start this month, the athlete youre about to meet is already training for the 2018 winter games. But an eye disease threatens to keep him from competing.

“I really just like the feeling of flying and spinning and jumping in the air and rotating as fast as you can,” Adrian Huertas, told Ivanhoe. “I just think its an amazing feeling and it is so much fun.”

Figure skater Adrian Huertas has his sights set on the 2018 Olympics.

“I would really like to be part of the U.S. team,” Adrian said.

But a problem with his vision could ice those dreams.

“About 3 years ago I told my mom my eye was blurry and I just thought it was blurry in one eye, but it turned out to be more than that,” Adrian said.

Adrians eye doctor diagnosed him with Keratoconus, a common eye disease affecting one in two-thousand people.

“In Keratoconus the cornea becomes misshapen so that the light rays arent focused,” Kathryn Colby, M.D, PhD, a cornea surgeon at Mass. Eye and Ear and an associate professor of ophthalmology at Harvard Medical School, said.

Sometimes it can lead to blindness. The only option used to be a corneal transplant, but now as part of a clinical trial at Massachusetts Eye & Ear, Adrian tries a new treatment to save his sight called collagen cross linking.

“What this does is strengthen the structural proteins of the cornea,” Dr. Colby said.

Doctors first soak the eye with the b-vitamin riboflavin. Then they apply UV light. The combination forms the cross links or bonds that strengthen the collagen molecules and stabilize the cornea.

In a three year trial in Italy, the procedure improved vision in almost 70 percent of patients. Promising stats for Adrian as he eyes Olympic glory.

“Hopefully I can make it and be good enough to do it,” Adrian said.

Collagen cross-linking still needs FDA approval in the states. Doctors arent sure when that will happen. Keratoconus currently has no approved treatments in the U.S. and accounts for 15 percent of the countrys corneal transplants.