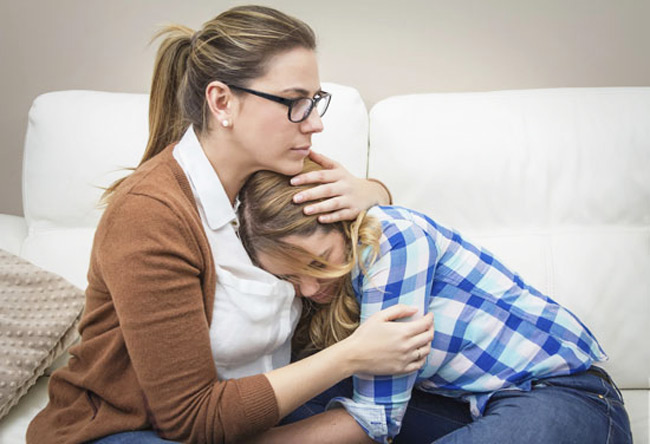 The importance of friendships and family support in helping prevent depression among teenagers has been highlighted in research from the University of Cambridge. The study, published in the open access journal PLOS ONE, also found that teenagers who had grown up in a difficult family environment were more likely than their peers to be bullied at school.

Adolescence is a key time in an individual’s development, and is a period where some teenagers begin to show signs of major depression. One of the major risk factors for depression in adolescence is childhood family adversity, such as poor parenting and lack of affection, emotional, physical or sexual abuse, family financial problems or the loss of a family member. Another major risk factor for depression is bullying by peers — and the combined experience of childhood family adversity and peer bullying is associated with increased severity of depression symptoms.

Studies suggest that friendships and supportive family environments may help protect adolescents from depression if they have experienced peer bullying and childhood family adversity. However, no study has simultaneously examined the complex interplay of early life adversity, bullying, family support and friendships on later adolescent depression.

Researchers at the Department of Psychiatry at the University of Cambridge studied almost 800 teenagers (322 boys and 449 girls), and used mathematical modelling to examine the impact of friendships and family support at age 14 on depressive symptoms at age 17 in adolescents who had previously experienced childhood family adversity and primary school bullying.

“Teenage years can be difficult for everyone, but we found that this is particularly the case for those teens who have had a difficult family environment,” explains Dr Anne-Laura van Harmelen, the study’s first author. “Adolescents who had experienced negative family environments are more likely to be bullied at school, and less likely to receive family support in adolescence. We also found that children who were bullied in primary school were less likely to have supportive friendships in adolescence.

“In fact, we found a strong relationship between having a negative family environment and being bullied at primary school. This puts teens at a double disadvantage and means they are more likely to experience more severe symptoms of depression in their late teens.”

Boys who had been bullied were less likely than girls to develop strong friendships in adolescence, which the researchers suggest may be because boys experienced more severe bullying or were more sensitive to bullying.

Crucially, the researchers also found that supportive family or friends in early adolescence could help reduce depressive symptoms in later teenage years. It is not clear from the results how social support influences later life mental health. However, the researchers suggest several possibilities, including that supportive friends and family environments may help enhance children’s ability to cope with adverse situations by improving their self-esteem and offering stress-relief and through helping them develop effective interpersonal skills.

“Our work really shows how important it is that children and teenagers have strong support from their family and friends, particularly if their childhood has been a difficult one,” adds Professor Ian Goodyer, senior author. “It also suggests a role for interventions such as helping parents in at-risk families develop their parenting and support skills or helping bullied teens build their confidence and social skills to help find and maintain friendships.”