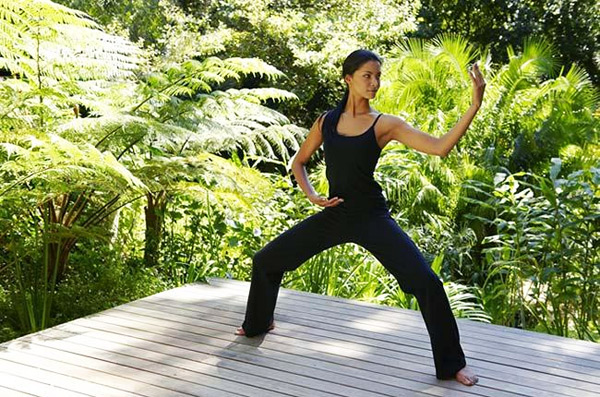 Both Tai Chi and physical therapy positively impact pain, function and other symptoms of knee osteoarthritis — making Tai Chi a viable treatment alternative for people suffering with the degenerative disease, according to research presented this week at the American College of Rheumatology Annual Meeting in San Francisco.

Osteoarthritis, sometimes called degenerative joint disease, is a slowly progressive disease in which joint cartilage breaks down. Normally, cartilage on the ends of bones allows smooth, pain-free joint movements. In OA, cartilage becomes thin and irregular, resulting in symptoms of joint pain and stiffness. Grinding or cracking sensations may occur. Joints that are under high stress due to repeated activity or weight bearing are most susceptible to OA. The hips, knees, hands and spine are commonly affected. OA becomes more common with aging.

Knee OA causes long-term pain, and treatment can be challenging. Recent studies have already shown Tai Chi to be effective in treating the physical and mental symptoms associated with the disease, and researchers recently took this a step further to determine if Tai Chi would hold up against physical therapy — a highly-regarded treatment for knee OA.

“Based on our previous investigation, we directly compared the effectiveness of two therapies each known to have health benefits for knee OA, explains Chenchen Wang MD, MSc; professor of medicine at Tufts University School of Medicine and director of the Center For Complementary And Integrative Medicine Division of Rheumatology at Tufts Medical Center in Boston, Mass.

Dr. Wang’s team selected 204 participants with symptomatic and radiographic knee OA for their study and randomly placed them into two groups. The first group of 106 completed 12 weeks of classical Yang style Tai Chi twice a week, while the second of 98 completed physical therapy twice a week for six weeks and then were monitored as they followed six weeks of at home physical therapy exercises.

On average, the participants were 60 years old, suffered from knee OA for eight years, had a BMI of 33, and were predominately white women. Dr. Wang’s team monitored the participants at 12, 24 and 52 weeks. They were looking for changes in pain and functioning (using the Western Ontario and McMaster Universities Arthritis Index, or WOMAC), depression, quality of life, and pain medication usage. They also asked patients to assess their own pain and functioning as well as complete two-meter and six-minute walking tests.

All participants had similar characteristics and test results in the beginning of the study. At week 12, WOMAC scores had improved by 167 points in the Tai Chi group and 143 points in the physical therapy group. There were no significant differences in WOMAC pain improvement. However, when the participants completed a 36-question survey (called the short form-36), researchers noted significant improvements in the results of the Tai Chi group at the 12-week mark. Additionally, the Tai Chi group noted improvements in depression, which Dr. Wang believes could be due to the mind-body connection one has with Tai Chi. Both groups reduced the amount of pain medication they took; their reactions to that reduction did not differ at 12 weeks, but did differ at 24 weeks with NSAIDs and 52 weeks with analgesics.

Based on these findings, Dr. Wang believes Tai Chi should be considered a beneficial therapeutic option to treat knee OA. “Patients and their physicians should discuss Tai Chi as a therapy option, but it is important that patients work with a seasoned instructor with five to 10 years of experience working with people who have OA to ensure they are receiving proper instruction,” says Dr. Wang.

The study done by American College of Rheumatology (ACR).