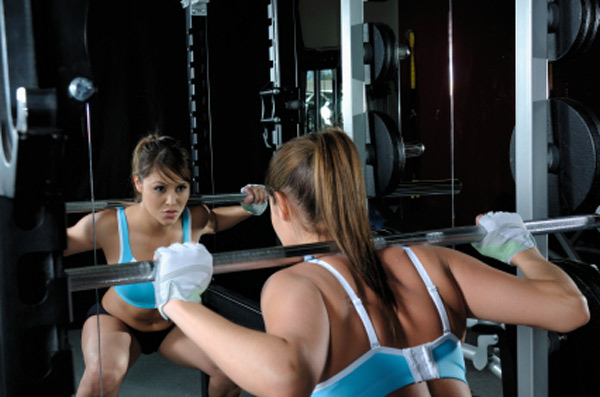 Despite being common practice, performing squat exercises in front of a mirror has no effect on preferential loading, according to a pilot study presented this week at the Association of Academic Physiatrists Annual Meeting in Sacramento, Calif.

The double-legged squat is regularly used in exercise and rehabilitation, and it is common to perform these squats in front of a mirror to receive visual feedback on form and positioning. Many people also suggest using a mirror to discourage preferential loading — putting more weight on one leg over the other — during the exercise, but the benefit of this practice is debatable. To address the question of whether or not it is beneficial to perform squats in front of a mirror, researchers from the Rehabilitation Institute of Chicago recently examined how preferential loading is affected when performing the exercise both with and without a mirror.

“When you speak to personal trainers, bodybuilders, or look on weight lifting websites, there are mixed messages about performing squats in front of a mirror,” says Lead Investigator in the study, Monica Rho, MD; director of Women’s Sports Medicine at the Rehabilitation Institute of Chicago’s Sports and Spine Rehabilitation Center and assistant professor at Northwestern University’s Feinberg School of Medicine. “The goal of most people who perform double leg squats as part of their exercise routine is to make sure their weight is evenly distributed on each leg. Everyone tries to achieve symmetry because they want to work out each leg equally during the squat. However, there is no data out there that demonstrates whether or not a mirror helps the loading symmetry of a squat, and this study was designed to answer that question.”

Dr. Rho’s team studied five healthy males and five healthy females without a history of hip or pelvic fracture or surgery, current low back or hip pain, hip osteoarthritis, or impaired balance due to a neurologic condition such as stroke or traumatic brain injury. The participants were between the ages of 18 and 50; all were English-speaking and none of the females were pregnant.

The participants performed squats to a standard chair height of 68.6 centimeters and were able to perform them at their own pace. Half of the participants started by using the mirror and the other half started without the mirror, and then they switched.

When the participants were allowed to choose their own starting foot position to squat, they tended to shift .82 percent of their body weight towards their non-dominant leg with a mirror and .74 percent without a mirror. But essentially again, this was not considered a statistically significant difference, therefore the presence or absence of a mirror did not seem to alter a person’s ability to distribute their weight evenly during a squat.

“Our findings indicate that, when it comes to equal weight distribution and symmetry of loading each leg during a squat, the mirror doesn’t seem to make a difference,” explains Dr. Rho. “However, this study did not address whether performing squats in front of a mirror facilitates proper form so people don’t hurt their back or knees while squatting. To that end, it is still possible that squatting in front of a mirror is better for people who have difficulty in maintaining good form during their squat.”

As for next steps, Dr. Rho suggests it would be beneficial to expand this to a larger population to see if the use of a mirror would affect the ideal squatting form of the knees remaining over the ankles (not in front of them) during the exercise.