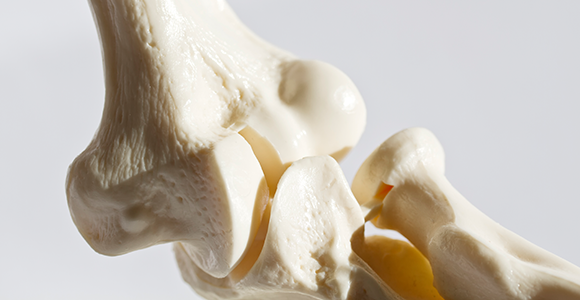 Among postmenopausal women with osteoporosis at risk of fracture, daily injection of the drug abaloparatide for 18 months significantly reduced the risk of new vertebral and nonvertebral fractures compared with placebo, according to a study appearing in the August 16 issue of JAMA.

Osteoporosis is associated with substantial social, economic, and public health burdens. Based on 2010 U.S. Census data, a study estimated the prevalence of osteoporosis among women 50 to 69 years of age at 3.4 million. It has been estimated that the lifetime risk of osteoporotic fracture for a 60-year-old woman is 44 percent. Additional therapies are needed for prevention of osteoporotic fractures. As a result of its mechanism of action, it has been hypothesized that the drug abaloparatide, a synthetic peptide, would have a more pronounced anabolic (i.e., bone growing) action on bone compared with the osteoporosis drug teriparatide.

Paul D. Miller, M.D., of the Colorado Center for Bone Research, Lakewood, Colo., and colleagues randomly assigned postmenopausal women with osteoporosis to receive daily injections for 18 months of placebo (n = 821); abaloparatide (n = 824); or teriparatide (n = 818). The trial was conducted at 28 sites in 10 countries.

Bone mineral density (BMD) increases were greater with abaloparatide than placebo. Incidence of hypercalcemia (the presence of abnormally high levels of calcium in the blood) was lower with abaloparatide (3.4 percent) vs teriparatide (6.4 percent). Overall, there were no differences in serious adverse events between the treatment groups.

“Further research is needed to understand the clinical importance of risk difference, the risks and benefits of abaloparatide treatment, and the efficacy of abaloparatide vs other osteoporosis treatments,” the authors write.

“Ultimately, which therapy is selected for osteoporosis treatment may be less important than identifying and initiating an approved treatment,” write Anne R. Cappola, M.D., Sc.M., of the Perelman School of Medicine at the University of Pennsylvania, Philadelphia, and Associate Editor, JAMA, and Dolores M. Shoback, M.D., of the University of California, San Francisco, in an accompanying editorial.

“The bar is high for any preventive treatment — in the efforts to prevent a fracture that may or may not ever occur, prescribers do not want to prescribe a therapy that causes a new problem. The way forward for fracture prevention involves not only the development of better therapies to prevent fracture and easier delivery systems but also improved adoption of existing osteoporosis therapies for patients with prior fractures and minimization of adverse effects, particularly those associated with long-term use.”