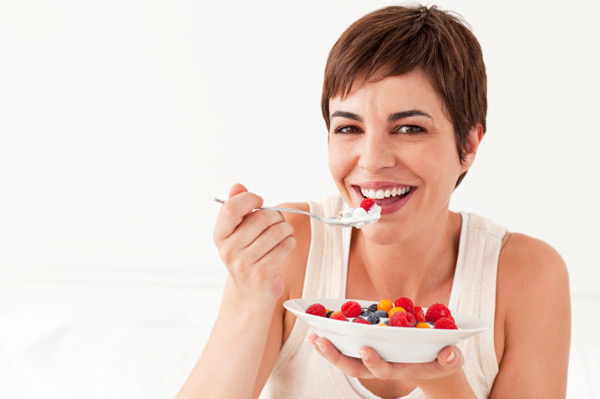 New research published in Diabetologia (the journal of the European Association for the Study of Diabetes) shows that higher consumption of yoghurt, compared with no consumption, can reduce the risk of new-onset type 2 diabetes by 28%. Scientists at the University of Cambridge found that in fact higher consumption of low-fat fermented dairy products, which include all yoghurt varieties and some low-fat cheeses, also reduced the relative risk of diabetes by 24% overall.

Lead scientist Dr Nita Forouhi, from the Medical Research Council (MRC) Epidemiology Unit at the University of Cambridge, commented “this research highlights that specific foods may have an important role in the prevention of type 2 diabetes and are relevant for public health messages.”

Dairy products are an important source of high quality protein, vitamins and minerals. However, they are also a source of saturated fat, which dietary guidelines currently advise people not to consume in high quantities, instead recommending they replace these with lower fat options.

The research was based on the large EPIC-Norfolk study which includes more than 25,000 men and women living in Norfolk, UK. It compared a detailed daily record of all the food and drink consumed over a week at the time of study entry among 753 people who developed new-onset type 2 diabetes over 11 years of follow-up with 3,502 randomly selected study participants. This allowed the researchers to examine the risk of diabetes in relation to the consumption of total dairy products and also types of individual dairy products.

The consumption of total dairy, total high-fat dairy or total low-fat dairy was not associated with new-onset diabetes once important factors like healthier lifestyles, education, obesity levels, other eating habits and total calorie intake were taken into account. Total milk and cheese intakes were also not associated with diabetes risk. In contrast, those with the highest consumption of low-fat fermented dairy products (such as yoghurt, fromage frais and low-fat cottage cheese) were 24% less likely to develop type 2 diabetes over the 11 years, compared with non-consumers.

When examined separately from the other low-fat fermented dairy products, yoghurt, which makes up more than 85% of these products, was associated with a 28% reduced risk of developing diabetes. This risk reduction was observed among individuals who consumed an average of four and a half standard 125g pots of yoghurt per week. The same applies to other low-fat fermented dairy products such as low-fat unripened cheeses including fromage frais and low-fat cottage cheese. A further finding was that consuming yoghurt in place of a portion of other snacks such as crisps also reduced the risk of developing type 2 diabetes.

While this type of study cannot prove that eating dairy products causes the reduced diabetes risk, dairy products do contain beneficial constituents such as vitamin D, calcium and magnesium. In addition, fermented dairy products may exert beneficial effects against diabetes through probiotic bacteria and a special form of vitamin K (part of the menaquinone family) associated with fermentation.

The authors acknowledge the limitations of dietary research which relies on asking people what they eat and not accounting for change in diets over time, but their study was large with long follow-up, and had detailed assessment of people’s diets that was collected in real-time as people consumed the foods, rather than relying on past memory. The authors conclude that their study therefore helps to provide robust evidence that consumption of low-fat fermented dairy products, largely driven by yoghurt intake, is associated with a decreased risk of developing future type 2 diabetes.

Dr Forouhi stated that “at a time when we have a lot of other evidence that consuming high amounts of certain foods, such as added sugars and sugary drinks, is bad for our health, it is very reassuring to have messages about other foods like yoghurt and low-fat fermented dairy products, that could be good for our health.”

The study done by University of Cambridge.