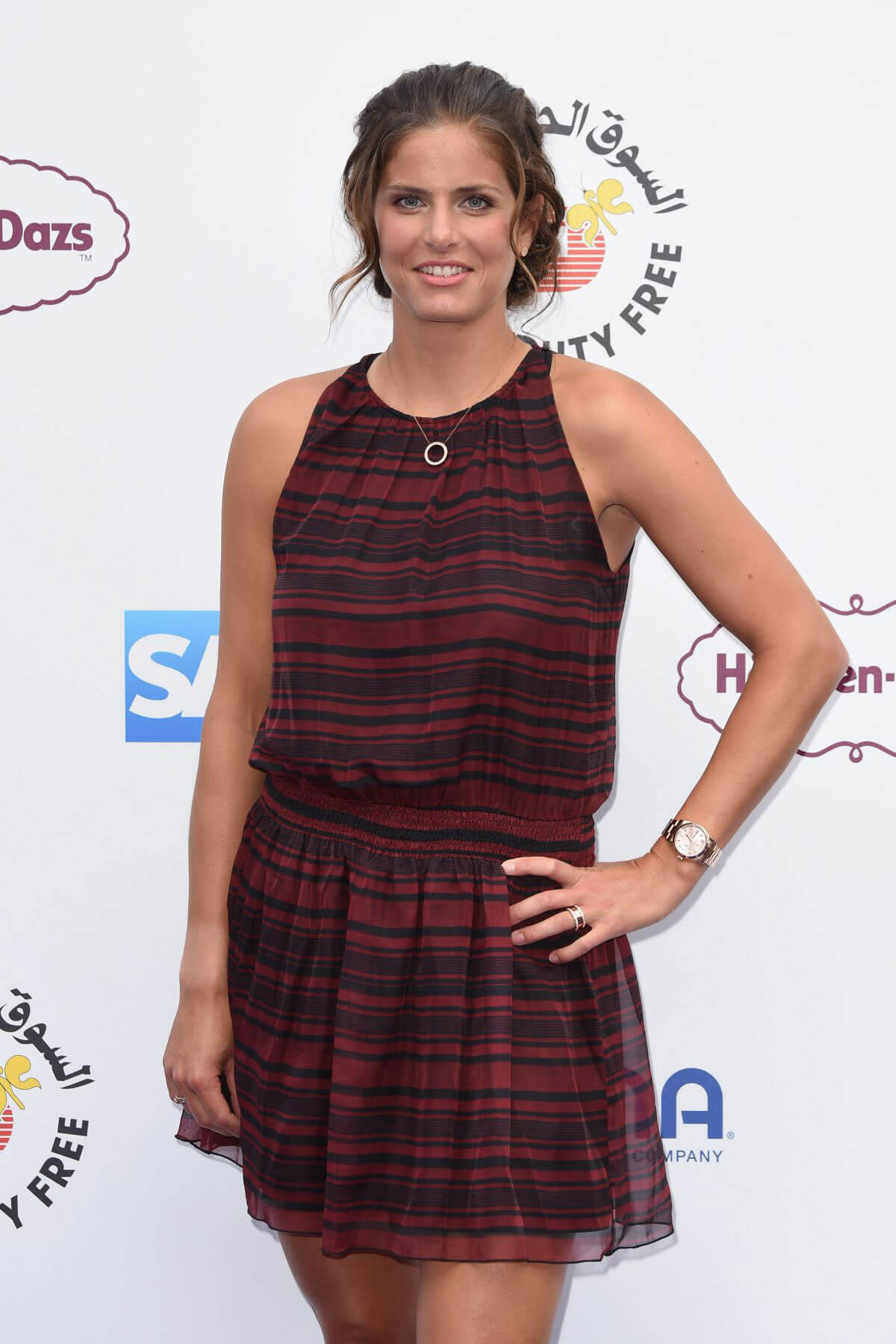 Just by imagining them sexiest tennis players alone makes you high, not to mention picturing them with those sexy tennis outfits and running around the tennis court chasing the ball eagerly, which later makes them sweaty, can you picture that? We have to admit aside from their incredible technique in tennis, their sexy vibe is probably one of the main reason why people will come and come again each year to watch the game, even in heavy rain sometimes. Women Fitness brings to you Top 10 most attractive and hottest women tennis players in the world based on various parameters and selection algorithms.

Julia Goerges: Julia Gorges was born on 2 November 1988 in Bad Oldesloe. She is a professional tennis player from Germany. Görges reached a career-high WTA singles ranking of number 15 on 5 March 2012 and a doubles ranking of 21 on 22 October 2012. To date, she has won two WTA singles titles and four doubles titles.

Julia Görges was born in Bad Oldesloe to Klaus and Inge Görges, both of whom work in insurance.She has one half-sister named Maike, who also works in insurance. She attended the Klaus-Groth Schule and Theodor-Mommsen Schule in Bad Oldesloe from 1995 to 2005, and completed the mittlere Reife (Realschulabschluss).

She began playing tennis around the age of five when her parents began taking her to the local club. Her tennis idol growing up was Martina Hingis, and she is also a fan of Roger Federer. She is coached by Sascha Nensel, former coach of fellow German player Nicolas Kiefer. The surfaces she prefers are hard and grass courts, and her favorite tournament is the Australian Open.

In 2005 she began her career on the ITF Women’s Circuit, playing in seven tournaments and losing in the first round in five of them.In 2006 and 2007 she continued to play mostly ITF Women’s Circuit tournaments. In 2006 she won the Wahlstedt and Bielefeld tournaments. In 2007 she won tournaments in Antalya and Bucharest and made her first WTA Tour main draw appearances, the highlight of which was a semifinals achievement in Stockholm. There she lost to Vera Dushevina in three sets. Görges made her Grand Slam main draw debut at the 2007 US Open, losing to Justine Henin in the first round in straight sets.

In 2008 Görges continued to play in a mix of ITF Women’s Circuit and WTA Tour events. Her best performances were reaching the semifinals of the 2008 Banka Koper Slovenia Open, where she lost to Anabel Medina Garrigues, and a quarterfinals loss to Olga Govortsova in the 2008 Cellular South Cup.

She made her top-100 debut in the rankings after the French Open. She won her first Grand Slam main-draw match at Wimbledon, where she upset 23rd seed Katarina Srebotnik,

In 2009, Görges began to play in WTA events more exclusively. It was the first season that she played in the main draw of all four Grand Slam events. She began her season at the 2009 Brisbane International, where she lost in qualifying to Anna-Lena Grönefeld.

Görges competed at the Australian Open, the Open GDF Suez, and the Warsaw Open, losing before the third round of each. She retired in the first round of the French Open in a match against Iveta Benešová, due to heat exhaustion.

Görges reached the third round of the AEGON Classic, falling to Urszula Radwańska, 6–7, 3–6. She went on to play against Jelena Janković in the first round of the Wimbledon

Championships, losing 4–6, 6–7. She lost prior to the third round at the Banka Koper Slovenia Open, the Istanbul Cup, and the US Open (where she faced Svetlana Kuznetsova).

At the Bell Challenge, she managed to reach the semifinals, before losing to Lucie Šafářová. She was defeated by Ioana Raluca Olaru in the second round of the 2009 Generali Görges started the 2010 season at the 2010 ASB Classic, losing in the first round to Yanina Wickmayer, 3–6, 5–7. She went on to play at the Australian Open, where she beat Tamira Paszek in the first round, 6–0, 3–6, 6–3, but then lost to Caroline Wozniacki in the second round.

At the 2010 Gastein Ladies, Görges won her first career WTA singles title by defeating Timea Bacsinszky in the final, 6–1, 6–4. She made her top-50 debut in the rankings

afterward. At the 2010 e-Boks Danish Open, she reached the quarterfinals, but was unable to take advantage of a 5–3 third-set lead over top seed Caroline Wozniacki, eventually falling, 6–3, 0–6, 6–7.

Görges defeated Romina Oprandi in the first round of the U.S. Open, before falling to 15th seed Yanina Wickmayer in the second round. At the Rakuten Japan Open Tennis Championships, she scored her first win over a former no. 1 player in the first round, defeating Dinara Safina, 6–1, 5–7, 6–2. In the next round, she defeated fourth seed Samantha Stosur, 7–5, 6–2, for her first win over a top-10 player. However, she was defeated by Coco Vandeweghe in the quarterfinals.

At the Generali Ladies Linz, she reached the quarterfinals, but fell to eventual champion Ana Ivanović. In her final tournament of the season, the BGL Luxembourg Open, she won a quarterfinals rematch with Ana Ivanović, defeating her, 6–3, 6–1. She eventually reached her second career WTA final, falling to Roberta Vinci.

Beginning her season at the 2011 ASB Classic, Görges lost in the semifinals to eventual champion Gréta Arn. In the second round of the Australian Open, she upset no. 20 seed

Kaia Kanepi 6–4, 3–6, 6–4. Her third-round match against the 2008 Australian Open champion Maria Sharapova was a three-set battle, which Görges eventually lost 6–4, 4–6, 4–6. This marked her best performance in a Grand Slam to-date, and she was rewarded by achieving a career-high no. 34 singles ranking on 31 January 2011.

On 5–6 February, she helped Germany defeat Slovenia in Fed Cup competition by clinching the tie with a straight-sets win over Maša Zec Peškirič, her first career win in Fed Cup

competition.Switching to hard-court, she then lost in the first round of Monterrey to Ksenia Pervak 1–6, 5–7. She continued to struggle at the BNP Paribas Open and the Sony Ericsson Open, losing in the 2nd and 1st round, respectively. In the Family Circle Cup in Charleston, however, she made a quarterfinal appearance on the green clay, losing to Elena Vesnina in three sets.

Heading to Stuttgart for Fed Cup, she won a rubber for Germany against Melanie Oudin, whom she lost to earlier in Miami. Staying in Stuttgart for the Porsche Tennis Grand Prix,

she won her first Premier-level tournament and second WTA tournament overall, upsetting Samantha Stosur along the way and benefiting from a retirement by Victoria Azarenka.

In the final, Görges scored the biggest win of her career by defeating world no. 1 Caroline Wozniacki 7–6, 6–3, to become the first German to win Stuttgart since Anke Huber in 1994.

Less than two weeks after winning in Stuttgart, Görges defeated Wozniacki once again at the Madrid Open, 6–4, 1–6, 6–3. She reached the semi-finals, where she lost to Azarenka.

Görges was the 17th seed at the 2011 French Open, but fell to 11th seed Marion Bartoli in the third round in three sets.

After a first round exit to Ana Ivanovic at the 2011 AEGON International, she reached the third round of the 2011 Wimbledon Championships where she fell to 24th seed Dominika Cibulková in 3 sets. Several early round exits plagued Görges at Bad Gastein, Stanford, Carlsbad, Toronto, Cincinnati, and Dallas, not advancing past the second round of any of them. As the 24th seed at the U.S. Open, she fell to 13th seed Peng Shuai in 2 close sets in the third round.

Taking part in the Asian part of the WTA tour, she fell in the quarterfinals of the 2011 Hansol Korea Open, the third round of the 2011 Toray Pan Pacific Open, and the first round of the China Open. She finished of her 2011 season with a semi-final loss to Victoria Azarenka at the 2011 BGL Luxembourg Open. She finished the year ranked 21st accumulating a 38–25 singles record and a 22–18 doubles record.
Seeded 5th at the 2012 ASB Classic, she defeated defending champion Gréta Arn 7–5, 3–6, 6–4, before falling to compatriot Angelique Kerber in straight sets. Görges experienced more success in doubles reaching the final with Flavia Pennetta before falling to the Czech duo of Andrea Hlaváčková and Lucie Hradecká in a third-set super tiebreak. After retiring in the first round of the 2012 Apia International Sydney to Jelena Janković, she achieved her best Australian Open to date by reaching the fourth round. Görges defeated Polona Hercog 6–3, 7–6 Eleni Daniilidou 6–2, 2–0 retired, Romina Oprandi 3–6, 6–3, 6–1, before being dominated by eighth seed Agnieszka Radwańska 6–1, 6–1. Playing in the Fed Cup for Germany, she lost to Petra Kvitová in an extremely tight three-setter, 6–3, 3–6, 8–10. Partnering with Anna-Lena Grönefeld, they lost to Iveta Benešová and Barbora Záhlavová-Strýcová 3–6, 6–7. Germany lost to Czech Republic 1–4.

Ranked 21st and seed 6th, she reached the quarterfinals of the 2012 Open GDF Suez, falling to Klára Zakopalová in 3 sets. Görges then fell in the second round of Qatar to Varvara Lepchenko, before reaching the final of Dubai. She defeated Svetlana Kuznetsova, Casey Dellacqua, Daniela Hantuchová, before scoring a 7–6, 7–5 win over third seed Caroline Wozniacki, before falling to Agnieszka Radwańska again. This time it was a tight two-setter, the score being 7–5, 6–4 to Radwańska. Due to her good result at the 2012 Dubai Tennis Championships, she achieved a career high ranking of 15.

Seeded 14th at the 2012 BNP Paribas Open, she advanced to the fourth round in straight sets, before becoming another victim of undefeated Victoria Azarenka 3–6, 1–6. After receiving another bye into the second round, Görges was defeated by 4-time Grand Slam champion Kim Clijsters 2–6, 5–7.

the third round to Arantxa Rus 6–7, 6–2, 2–6, ending the match with two double faults. At the end of the third set Görges complained of lack of light, which was set aside by the head supervisor. After this she asked for a medical time-out and asked again to suspend the match, which again was denied by the umpire. In the women doubles she lost in the first round with partner Samantha Stosur.

She was the number one seed in Bad Gastein but lost in three sets to the Dutch qualifier Richèl Hogenkamp. Hogenkamp, ranked 211 at the time, won her first WTA match 3–6, 6–3, 6–3.

She reached the second round of Sony Swedish Open, Bastad losing to Polona Hercog, 6–7 2–6.