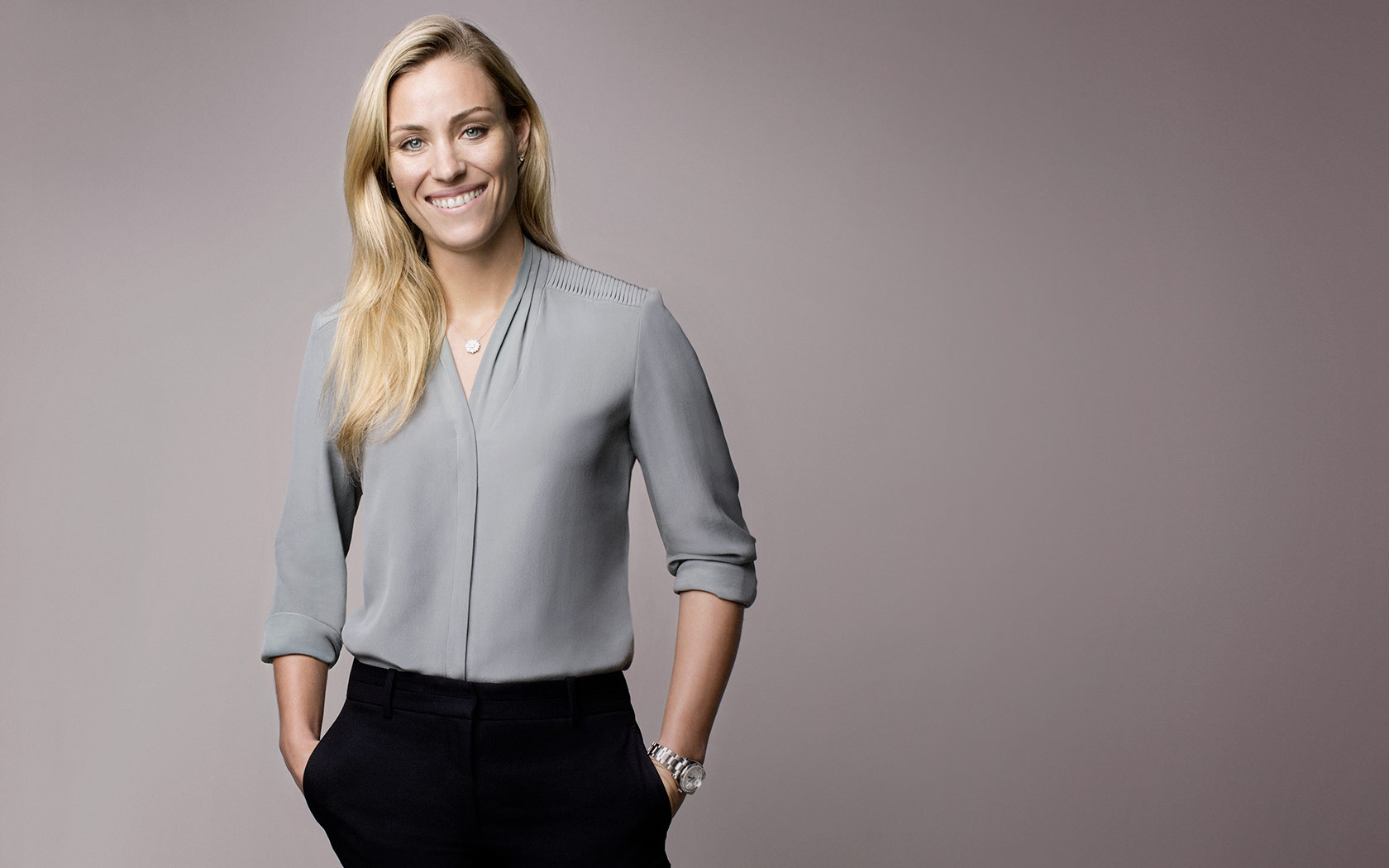 Angelique Kerber: Angelique Kerber was born on 18 January 1988 in Bremen. She is a professional German tennis player who is currently ranked at a career high of world number five, a ranking she first achieved on 22 October 2012. As such, Kerber is currently the highest ranked German in the WTA Rankings.

Kerber has competed as a professional since 2003, has won two WTA titles (2012 Open GDF Suez and 2012 e-Boks Open) and eleven ITF titles. Kerber’s best Grand Slam results have come at the 2011 US Open and the 2012 Wimbledon Championships where she was a semifinalist, and the 2012 French Open where she reached the quarterfinals.

Angelique Kerber was born in Bremen, to father Sławomir Kerber and mother Beata, and has one sister. Both of her parents are German Polish. She started playing tennis aged three, eventually joining the junior circuit. She made inroads at events in Germany and elsewhere in Europe, but didn’t win a junior title before 2003, at which point she had already turned professional aged 15. Kerber speaks German, Polish and English.

In 2003, Kerber obtained her first top 100 victory by defeating Marion Bartoli in the qualifying draw of the WTA German Open.
In 2004, Kerber started the year by reaching the final of an ITF event in Warsaw, but lost to Marta Domachowska. She attained her first ITF title entering as a qualifier in Opole, defeating Elena Tatarkova in the final.

In 2005, Kerber competed in the ITF events and qualifying draws. She reached one final in Monzon, losing to Olena Antypina.

2006 was a more successful year for the German as she reached four ITF finals, winning three of them. She was runner-up in Přerov, but then won three events in Saguenay, Glasgow and Jersey. 2006 was also the year that Kerber attained her first WTA tour main draw victory, at the Gaz de France Stars, over world number 48 Romina Oprandi. She later lost to Ana Ivanović.
2007 was a breakthrough year for Kerber as she won four titles. Having defended her title in Seguanay by defeating fellow German Sabine Lisicki, she won in Las Palmas, in Turkey, and again in Přerov. She also reached three other finals finishing as runner-up. 2007 was Kerber’s Grand Slam debut as she competed in the 2007 French Open, losing to Elena Dementieva; 2007 Wimbledon, losing to Anna Chakvetadze; and the 2007 US Open, losing to Serena Williams; each in the first round. She reached her first main draw quarterfinal at the 2007 Ordina Open, before losing to eventual champion Anna Chakvetadze.

Kerber’s first tournament was the 2012 ASB Classic. She defeated Marina Erakovic in the first round; fifth seed Julia Görges in the second round; and the top seed, Sabine Lisicki, in the quarterfinal, when Lisicki retired due to a back injury at a score of 6–4, 4–3. She lost her semifinal match to fourth seeded Flavia Pennetta.

At the 2012 Australian Open, Kerber was the 30th seed. In the first round, she defeated the wildcard local Bojana Bobusic 6–1, 6–3. In the second round she faced Canadian Stéphanie Dubois and defeated her 7–5, 6–1. In third round, she faced fourth seed Maria Sharapova and lost 1–6, 2–6. As a result, Kerber rose to her career high singles ranking of world number 27.

At the 2012 Fed Cup, Kerber played for Germany against the Czech Republic, teaming up along Sabine Lisicki, Julia Görges and Anna-Lena Grönefeld. Her only rubber was a singles match which she played against Lucie Hradecká. She won the tie 6–4, 6–4, producing Germany’s only win in the play-off.

Her next tournament was the Open GDF Suez where she was the ninth seed, and where she won her first ever WTA title. In the first round, she faced Lucie Šafářová and won 6–2, 7–6. In the second round, she faced Monica Niculescu and beat her 6–3, 4–6, 6–3. She then played the number one seed Maria Sharapova in the quarterfinal, beating her in straight sets. This set up a semifinal match against the unseeded Yanina Wickmayer. Kerber won to set-up her second ever WTA final. She played second seed Marion Bartoli in the final; Kerber won the first set 7–6 and took an early 3–0 lead in the second. Bartoli came back to level the score at 5–5 and eventually took the set 5–7. Kerber shot off to a 4–0 lead in the third and finished the set with a 6–3 score to close out the match.

She then entered the 2012 Qatar Total Open where she met Sabine Lisicki again, defeating her in the first round with a score of 4–6, 6–4, 6–1. She lost to unseeded Bulgarian Tsvetana Pironkova in the second round.

Kerber’s next tournament was the BNP Paribas Open in Indian Wells. Receiving a bye in the first round as the 18th seed, she defeated the young Sloane Stephens in a miraculous comeback from 6–2, 5–1, 40–15 down; facing two match points in winning 2–6, 7–5, 6–4, advancing to the fourth round via default over Vania King, who withdrew, and then produced another win from behind against another dangerous player, Christina McHale, coming back from 4–1 down in the third set and facing match points at 6–5 down to win 6–3, 3–6, 7–6. Kerber upsett eighth seed Li Na in the quarterfinals 6–4, 6–2, before her successful week came to an end, losing to world number one and eventual champion Victoria Azarenka. Her ranking improved to a career high of number 14 as a result of that fantastic run in California. As the 14th seed at the Sony Ericsson Open in Miami, Kerber was expected to do well there, but was upset in her opener (having received a bye in the first round) against Zheng Jie, 6–7, 1–6.

Kerber’s next stop was the 2012 e-Boks Open in Copenhagen where she was the second seed. In her opener, she was pushed to the limit as she struggled past Stephanie Foretz Gacon; she had to grind out two more three-set wins against Anne Keothavong and fellow German Mona Barthel (coming from 5–2 down in third set and saving match points at 5–4 down). After three tough wins, she defeated third seed and former world number one Jelena Janković, 6–2, 6–1, to reach her third career WTA final, and second of the year.

She won the title, beating the top seed and defending champion Caroline Wozniacki with a score of 6–4, 6–4.

Kerber reached the final of the Eastbourne grass court tournament, losing to Tamira Paszek, having served for the championship at 5–3 in the deciding set and missing five match points.

At the 2012 Wimbledon Championships, Kerber was seeded number eight. In the first round she defeated Lucie Hradecká with a score of 6–4, 6–1. In the second round, she defeated the Russian Ekaterina Makarova 7–5, 6–3. She also defeated the number 28 seed Christina McHale 6–2, 6–3. In the fourth round, she won easily against the former world number one Kim Clijsters with an astonishing score of 6–1, 6–1, booking a place in the quarterfinals in just 49 minutes. In the quarterfinal, she beat fellow German and 15th seeded Sabine Lisicki in three sets with a score of 6–3, 6–7, 7–5, having being down 3–5 in the third set. In the semifinal, she lost to number three seed Agnieszka Radwańska.

Her first tournament of the 2012 US Open Series was the 2012 Rogers Cup, where she lost in the third round to Roberta Vinci. She then played the 2012 Western & Southern Open, beating Tímea Babos in the second round and Andrea Hlaváčková in the third round. In the quarterfinal, Kerber beat Serena Williams for the first time, winning 6–4, 6–4. This snapped Williams 19-match winning streak. Kerber then defeated Petra Kvitová in her semifinal. However, she fell to Li Na in the final in three sets. At the US Open, Kerber, seeded sixth, struggled to victory over unseeded Venus Williams in a 6–2, 5–7, 7–5 in the second round. She lost in the fourth round 6–7, 3–6 to Sara Errani, the number ten seed from Italy.

Kerber’s next tournament after the US Open was the Toray Pan Pacific Open in Tokyo. She made it to the semifinals before losing to Agnieszka Radwanska. At the China Open, she was seeded sixth and made it to the quarterfinals but was forced to retire against Maria Sharapova due to a foot injury.