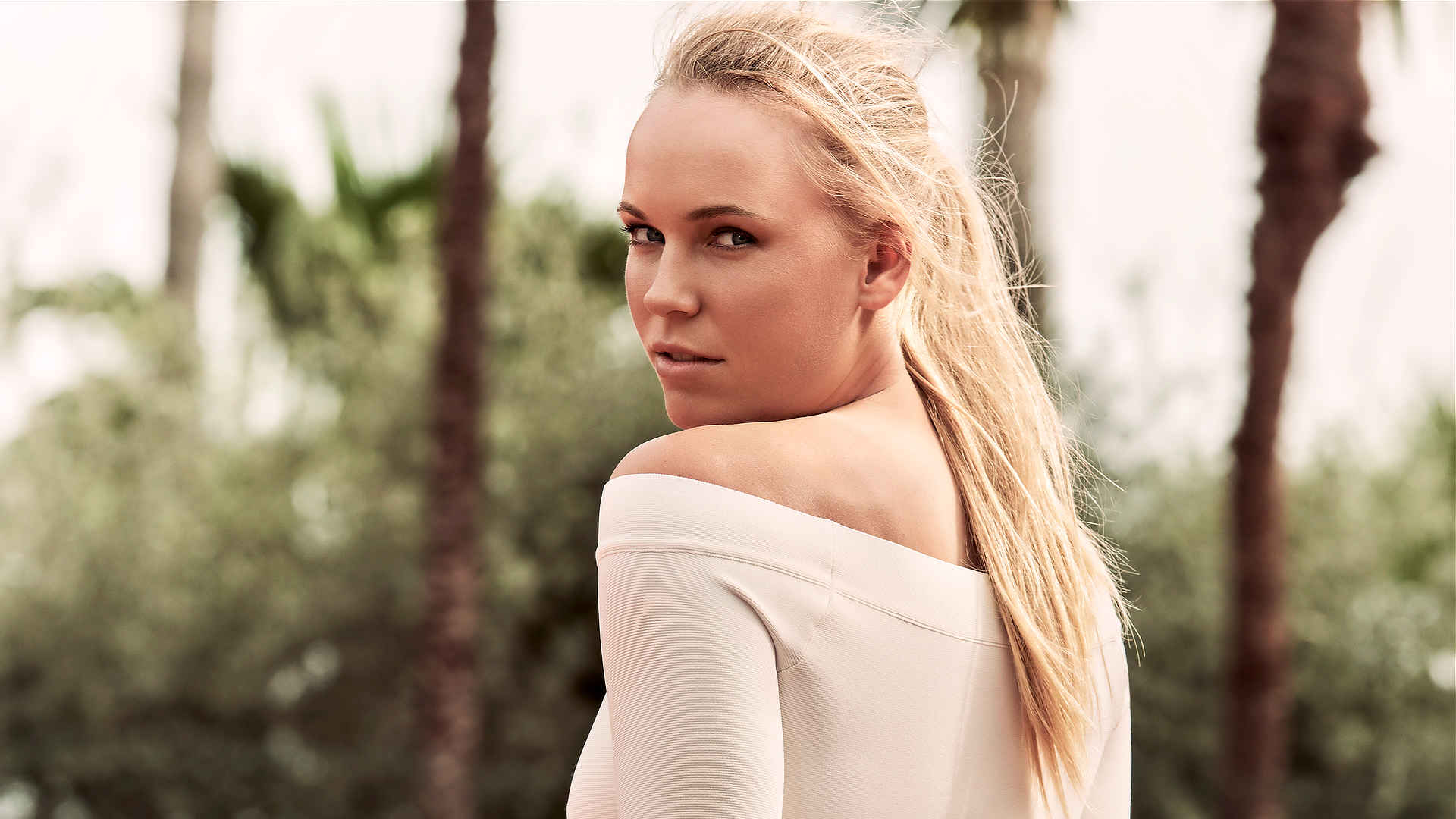 Caroline Wozniacki: Caroline Wozniacki was born on 11 July 1990.She is a Danish professional tennis player. She is a former World No. 1 on the WTA Tour. As of 23 January 2012, she held this position for 67 weeks. She was the first Scandinavian woman to hold the top ranking position and 20th overall.

Wozniacki’s playing style centers on “the defensive aspects of tennis with her anticipation, movement, agility, footwork and defence all first-rate and key parts of her game.”Her two-handed backhand is one of her best weapons as she is capable of turning defense into offense, most notably the backhand down-the-line. Her defensive playing style has her contemporaries label her a counter-puncher.

dress at the 2009 US Open. She also has sponsorship agreements with Compeed, Rolex, Danske Invest, Oriflame, Turkish Airlines, Proactiv, Sony Ericsson, Yonex and e-Boks. In 2012, Wozniacki became the new face of Compeed®BlisterPatch.

Wozniacki won several junior tournaments in 2005, including the Orange Bowl tennis championship. She made her debut on the WTA Tour at Cincinnati’s Western & Southern Financial Group Women’s Open on 19 July 2005, losing to the top-seeded and eventual champion Patty Schnyder in the first round. In the Nordea Nordic Light Open, her other WTA tournament of the year, she lost to Martina Suchá in the first round.

Wozniacki began her season by representing Denmark at the 2012 Hopman Cup with Frederik Nielsen as her partner. Wozniacki won two of her three round robin matches in singles, defeating Bethanie Mattek-Sands and Tsvetana Pironkova before losing to world no. 2 Petra Kvitová.

Wozniacki’s first WTA event was the Apia International Sydney. After a first round bye, Wozniacki defeated Dominika Cibulková after trailing 4–0 in the third set. She lost to Agnieszka Radwańska in three sets in the quarterfinals, after serving for the match at 5–4 up in the second set.

Wozniacki competed at the Australian Open as the top seed. She defeated Anastasia Rodionova, Anna Tatishvili, Monica Niculescu, and Jelena Janković, all in straight sets, to reach the quarterfinals where she lost to the defending champion Kim Clijsters. As a result, Wozniacki lost her top ranking and was replaced by the 2012 champion Victoria Azarenka.

Next playing at Doha, Wozniacki lost to Lucie Safarova in the second round, having received a first round bye.
Wozniacki was the defending champion in Dubai and Indian Wells, but failed to defend either title, losing to Julia Görges and Ana Ivanovic, respectively.

Wozniacki reached the semifinals in Miami after beating Barbora Záhlavová-Strýcová, Petra Cetkovska, Yanina Wickmayer, and Serena Williams, all in straight sets. Wozniacki then lost to second seed Maria Sharapova. Wozniacki did not defend her title in Charleston as she was not allowed to participate under WTA rules because two top-6 players had already entered the draw. Wozniacki then played her home tournament in Copenhagen. She reached the final but lost to Angelique Kerber, her first loss at the tournament since the start in 2010.

Wozniacki reached the third round of the French Open, where she lost to Kaia Kanepi in three sets.
Wozniacki lost in the first round of Wimbledon, 7–5, 6–7, 4–6, to Austrian Tamira Paszek. It was her first opening-round exit from any Grand Slam since making her professional debut at the 2007 French Open.

Wozniacki represented Denmark at the Olympics as the eighth seed in the women’s singles event. In the first three rounds she defeated Anne Keothavong, Yanina Wickmayer and Daniela Hantuchova. She was then defeated by the eventual champion Serena Williams in the quarterfinals.

Wozniacki next participated in the Rogers Cup where she lost to Petra Kvitova in the semifinals, and the Western & Southern Open where she was defeated in the third round by Anastasia Pavlyuchenkova. As the four-time defending champion at the New Haven Open at Yale, Wozniacki retired against Maria Kirilenko in the semifinals due to a right knee injury, which she had suffered in her quarterfinal win over Dominika Cibulkova.

Wozniacki, still suffering with the injury, was seeded eighth at the 2012 US Open, but did not advance past the first round. She lost 2–6, 2–6 to 96th-ranked Romanian Irina-Camelia Begu. As a result of the loss, Wozniacki dropped out of the top 10 for the first time in three years.

After the US Open disappointment, Wozniacki won her first tournament of the year in Seoul by defeating Arantxa Rus, Caroline Garcia, Klara Zakopalova, Ekaterina Makarova, and Kaia Kanepi in the final. It was her 19th career title.

Wozniacki’s next tournament was the Toray Pan Pacific Open in Tokyo. She defeated Bojana Jovanovski, Daniela Hantuchova and Li Na, before losing to Agnieszka Radwanska in the quarterfinals.

At the China Open in Bejing, Wozniacki defeated Chanelle Scheepers and Hsieh Su-wei but lost to Angelique Kerber in the third round.
Wozniacki’s next tournament was the Kremlin Cup. As the third seed in the tournament, she defeated top seed Samantha Stosur in the final in 3 sets, 6–2, 4–6, 7–5, to take home her second title of the year, and 20th overall.

At the year-end Tournament of Champions in Sofia, Wozniacki won her three group matches and reached the final but lost to Nadia Petrova. She ended the year ranked 10th.

Wozniacki’s best friend is her fellow Danish tennis player Malou Ejdesgaard, who has been her doubles partner in five tournaments.When asked in 2008 by Teen Vogue magazine what sports beside tennis she liked to play, Wozniacki said “I like handball, soccer, swimming, playing the piano, and all kinds of different things.”

On 20 December 2010, she signed a three-year deal to endorse Turkish Airlines’ business class service.She is a fan of English Premier League team Liverpool F.C.. She wore a Liverpool shirt signed by footballer Steven Gerrard on court in the 2011 Qatar Ladies Open.According to Forbes in 2011 she was the second highest earning female athlete in the world.According to the June 2011 edition of SportsPro Wozniacki is the world’s ninth most marketable athlete.She is currently dating Northern Irish professional golfer Rory McIlroy