This is a disease of the connective tissue and is extremely rare. When tissues such as muscles, tendons and ligaments are damaged, they become ossified (turn into bone). Patients can be almost completely unable to move by the time they die, making it one of the worst incurable diseases.

Fibrodysplasia ossificans progressiva (FOP), sometimes referred to as Stone Man Syndrome, is an extremely rare disease of the connective tissue. A mutation of the body’s repair mechanism causes fibrous tissue (including muscle, tendon, and ligament) to be ossified spontaneously or when damaged. In many cases, injuries can cause joints to become permanently frozen in place. Surgical removal of the extra bone growths has been shown to cause the body to “repair” the affected area with more bone.

Children born with FOP have deformed big toes, possibly missing a joint or simply presenting with a notable lump at the minor joint. The first “flare-up” that leads to the formation of FOP bones usually occurs before the age of 10. FOP is a genetic disease. The bone growth progresses from the top downward, just as bones grow in fetuses. A child with FOP will typically develop bones starting at the neck, then on the shoulders, arms, chest area and finally on the feet. Specifically, FOP involvement is typically seen first in the dorsal, axial, cranial and proximal regions of the body. Later the disease progresses in the ventral, appendicular, caudal and distal regions of the body. However it does not necessarily occur in this order due to injury-caused flare-ups. Often, the tumor-like lumps that characterize the disease appear suddenly.

The gene that causes ossification is normally deactivated after a fetus’ bones are formed in the womb, but in patients with FOP, the gene keeps working. Aberrant bone formation in patients with FOP occurs when injured connective tissue or muscle cells at the sites of injury or growth incorrectly express an enzyme for bone repair during apoptosis (self-regulated cell death), resulting in lymphocytes containing excess bone morphogenetic protein 4 (BMP4) provided during the immune system response. The bone that results occurs independently of the normal skeleton, forming its own discrete skeletal elements. These elements, however, can fuse with normal skeletal bone. Interestingly, the diaphragm, tongue, and extra-ocular muscles are spared in this process, as well as cardiac and smooth muscle. Since the incorrect enzyme remains unresolved within the immune response, the body continues providing the incorrect BMP4-containing lymphocytes. BMP4 is a product that contributes to the development of the skeleton in the normal embryo.
Because the disease is so rare, the symptoms are often misdiagnosed as cancer or fibrosis. This leads doctors to order biopsies, which can actually exacerbate the growth of these lumps.

There is no known cure for FOP. Attempts to surgically remove the bone result in more robust bone growth. While under anesthesia, patients with FOP may face problems, which include difficulties with intubation, restrictive pulmonary disease, and changes in the electrical conduction system of the heart. Activities that increase the risk of falling should be avoided, as injuries from falling can provoke the growth of bone. 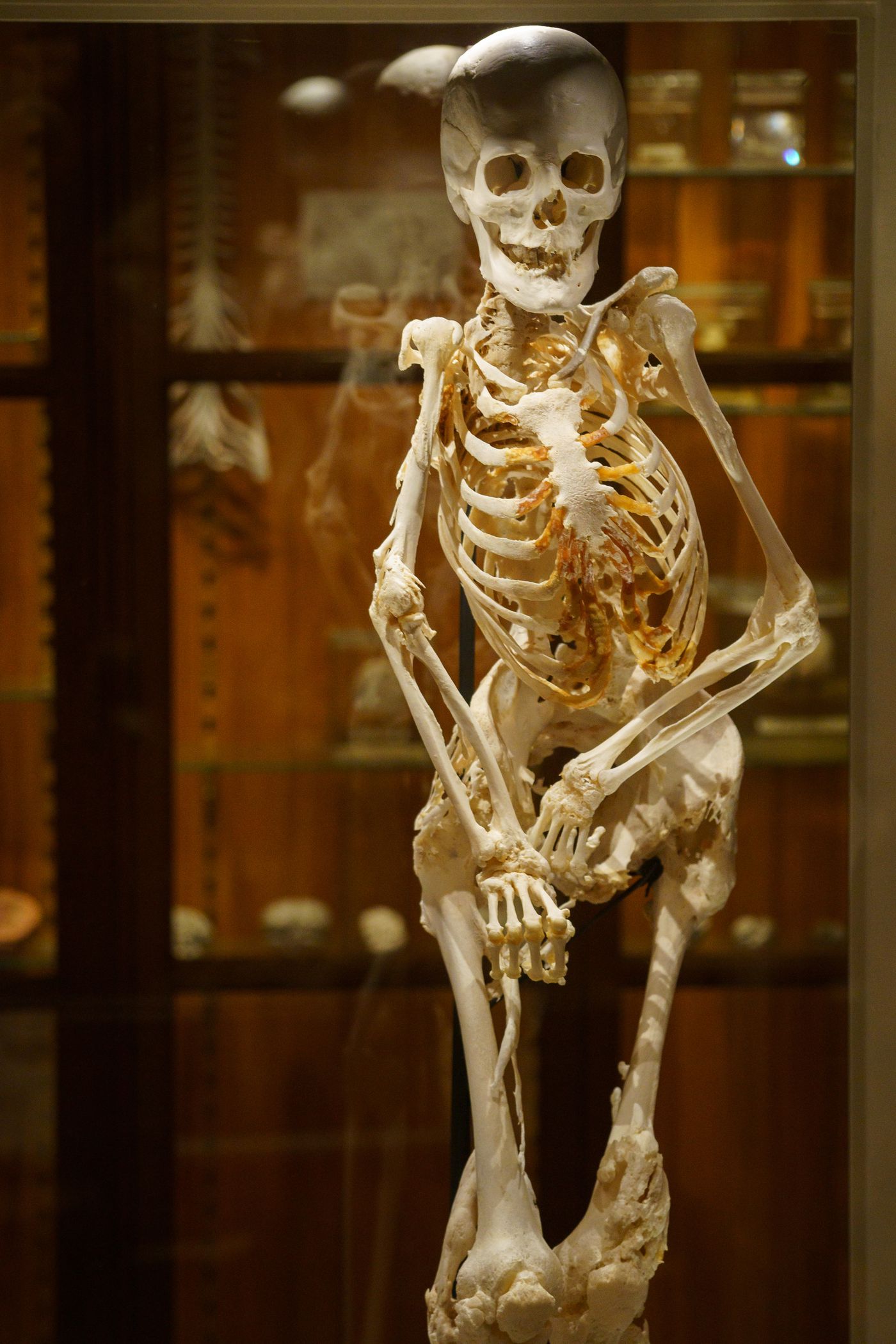 In 1999, scientists discovered that squalamine in sharks might be useful in treating those suffering from FOP. Squalamine is antiangiogenic and can prevent the growth of blood vessels in cartilaginous tissue, thus preventing creation of bone in sharks. A trial of squalamine started in 2002 but terminated about 2007.

As of November 2010, there are no registered clinical trials for FOP.
Researchers believe that specific kinase inhibitors can be developed that will block the aberrant ACVR1 activity, and are actively investigating dorsomorphin and K02288 as lead compounds with the intention of developing effective therapies. For example, the more potent dorsomorphin derivative LDN-193189 reduced ossification in a transgenic mouse model, in which the engineering of adult ACVR1 activity created an inflammation-dependent ossification sensitive to corticosteroid treatment.

Since the 1800s, there have been references in medicine describing people who apparently “turned to stone”; some of these cases may be attributable to FOP. The best known FOP case is that of Harry Eastlack (1933–1973). His condition began to develop at the age of ten, and by the time of his death from pneumonia in November 1973, six days before his 40th birthday, his body had completely ossified, leaving him able to move only his lips.

Shortly before Eastlack’s death, he made it known that he wanted to donate his body to science, in the hope that in death, he would be able to help find a cure for this little-understood and particularly cruel disease. Pursuant to his wishes, his preserved skeleton is now kept at the Mütter Museum in Philadelphia, and has proven to be an invaluable source of information in the study of FOP. There have approximately been 700 confirmed cases across the globe from an estimated 2500.