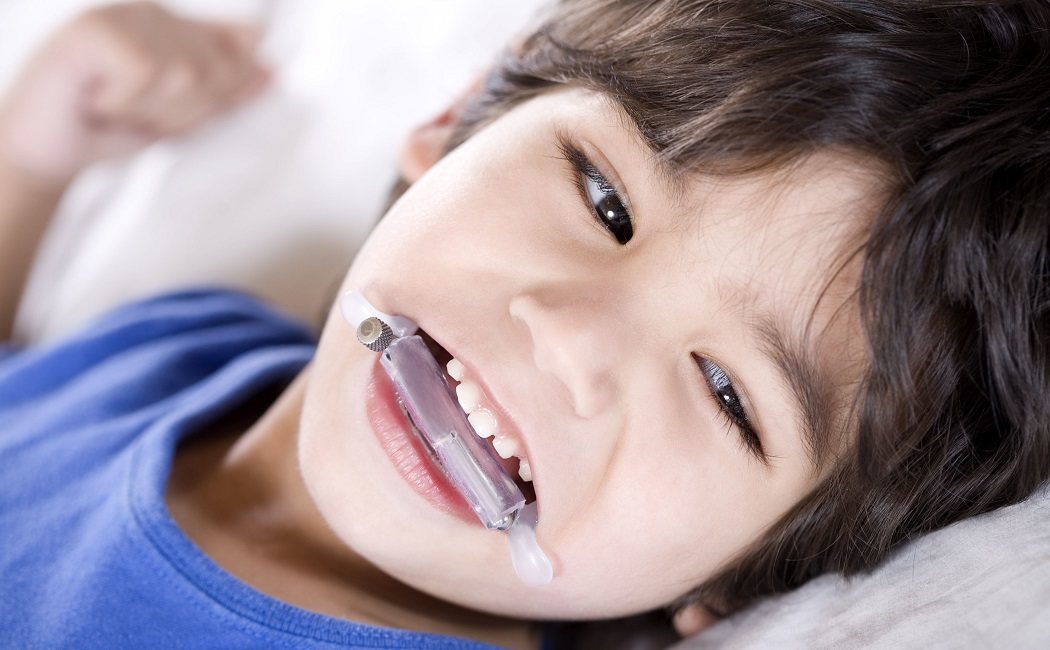 This is an inherited disorder which is caused by the deficiency of a certain enzyme, causing a build-up of uric acid in the body fluids. This leads to poor muscle control and mental retardation. Sufferers often self-mutilate and can be violent. Although there’s no cure, sufferers do often live to adulthood.

Lesch–Nyhan syndrome (LNS), also known as Nyhan’s syndrome, Kelley-Seegmiller syndrome and juvenile gout, is a rare inherited disorder caused by a deficiency of the enzyme hypoxanthine-guanine phosphoribosyltransferase (HGPRT), produced by mutations in the HPRT gene located on (the) X chromosome. LNS affects about one in 380,000 live births. The disorder was first recognized and clinically characterized by medical student Michael Lesch and his mentor, pediatrician William Nyhan, who published their findings in 1964.

The HGPRT deficiency causes a build-up of uric acid in all body fluids. This results in both hyperuricemia and hyperuricosuria, associated with severe gout and kidney problems. Neurological signs include poor muscle control and moderate mental retardation. These complications usually appear in the first year of life. Beginning in the second year of life, a particularly striking feature of LNS is self-mutilating behaviors, characterized by lip and finger biting. Neurological symptoms include facial grimacing, involuntary writhing, and repetitive movements of the arms and legs similar to those seen in Huntington’s disease. The etiology of the neurological abnormalities remains unknown. Because a lack of HGPRT causes the body to poorly utilize vitamin B12, some boys may develop megaloblastic anemia.

LNS is an X-linked recessive disease: the gene mutation is usually carried by the mother and passed on to her son, although one-third of all cases arise de novo (from new mutations) and do not have a family history. LNS is present at birth in baby boys. Most, but not all, persons with this deficiency have severe mental and physical problems throughout life. There are a few rare cases in the world of affected females.

LNS is characterized by three major hallmarks: neurologic dysfunction, cognitive and behavioral disturbances including self-mutilation, and uric acid overproduction (hyperuricemia). Damage to the basal ganglia causes sufferers to adopt a characteristic fencing stance due to the nature of the lesion. Some may also be afflicted with macrocytic anemia. Virtually all patients are male; males suffer delayed growth and puberty, and most develop shrunken testicles or testicular atrophy. Female carriers are at an increased risk for gouty arthritis but are usually otherwise unaffected.

One of the first symptoms of the disease is the presence of sand-like crystals of uric acid in the diapers of the affected infant. Overproduction of uric acid may lead to the development of uric acid crystals or stones in the kidneys, ureters, or bladder. Such crystals deposited in joints later in the disease may produce gout-like arthritis, with swelling and tenderness.

The overproduction of uric acid is present at birth, but may not be recognized by routine clinical laboratory testing methods. The serum uric acid concentration is often normal, as the excess purines are promptly eliminated in the urine. The crystals usually appear as an orange grainy material, or they may coalesce to form either multiple tiny stones or distinct large stones that are difficult to pass. The stones, or calculi, usually cause hematuria (blood in the urine) and increase the risk of urinary tract infection. Some victims suffer kidney damage due to such kidney stones. Stones may be the presenting feature of the disease, but can go undetected for months or even years.

The periods before and surrounding birth are typically normal in individuals with LNS. The most common presenting features are abnormally decreased muscle tone (hypotonia) and developmental delay, which are evident by three to six months of age. Affected individuals are late in sitting up, while most never crawl or walk. Lack of speech is also a very common trait associated with LNS.

Irritability is most often noticed along with the first signs of nervous system impairment. Within the first few years of life, extrapyramidal involvement causes abnormal involuntary muscle contractions such as loss of motor control (dystonia), writhing motions (choreoathetosis), and arching of the spine (opisthotonus). Signs of pyramidal system involvement, including spasticity, overactive reflexes (hyperreflexia) and extensor plantar reflexes, also occur. The resemblance to athetoid cerebral palsy is apparent in the neurologic aspects of LNS. As a result, most individuals are initially diagnosed as having cerebral palsy. The motor disability is so extensive that most individuals never walk, and become lifelong wheelchair users. 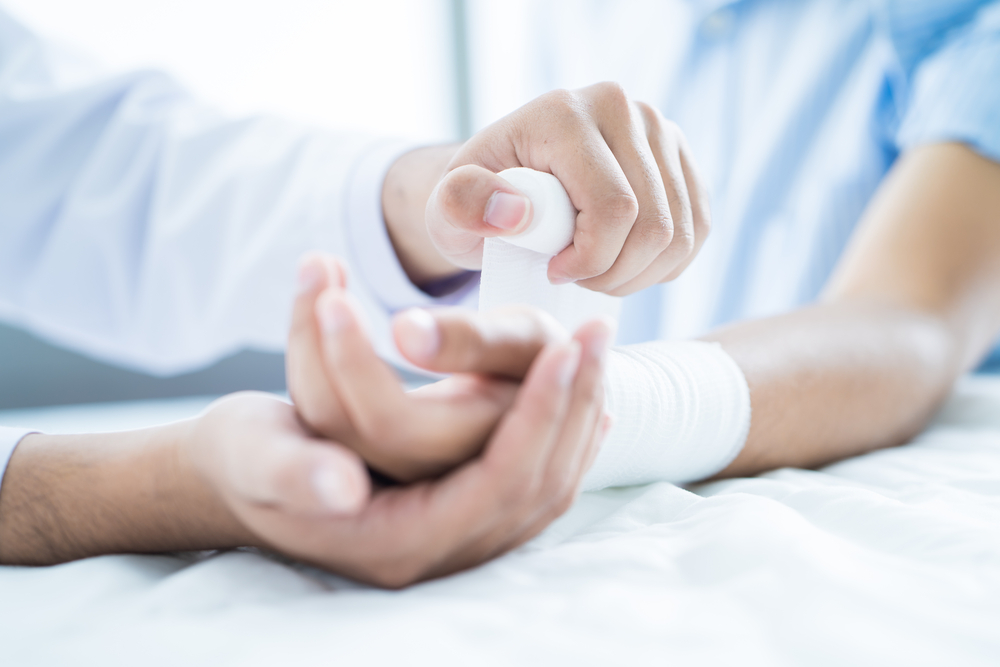 Persons affected are cognitively impaired and have behavioral disturbances that emerge between two and three years of age. The uncontrollable self-injury associated with LNS also usually begins at three years of age. The self-injury begins with biting of the lips and tongue; as the disease progresses, affected individuals frequently develop finger biting and head banging. The self-injury can increase during times of stress. Self-harm is a distinguishing characteristic of the disease and is apparent in 85% of affected males.

The majority of individuals are cognitively impaired, which is sometimes difficult to distinguish from other symptoms because of the behavioral disturbances and motor deficits associated with the syndrome. In many ways, the behaviors may be seen as a psychological extension of the compulsion to cause self-injury, and include rejecting desired treats or travel, repaying kindness with coldness or rage, failing to answer test questions correctly despite study and a desire to succeed, provoking anger from caregivers when affection is desired.

Compulsive behaviors also occur, including aggressiveness, vomiting, spitting, and coprolalia (involuntary swearing). The development of this type of behavior is sometimes seen within the first year, or in early childhood, but others may not develop it until later in life.

While carrier females are generally an asymptomatic condition, they do experience an increase in uric acid excretion, and some may develop symptoms of hyperuricemia, and suffer from gout in their later years. Testing in this context has no clinical consequence, but it may reveal the possibility of transmitting the trait to male children. Women may also require testing if a male child develops LNS. In this instance, a negative test means the son’s disease is the result of a new mutation, and the risk in siblings is not increased.

Females who carry one copy of the defective gene are carriers with a 50% chance of passing the disease on to their sons. In order for a female to be affected, she would need to have two copies of the mutated gene, one of which would be inherited from her father. Males affected with LNS do not usually have children due to the debilitating effects of the disease. It is possible for a female to inherit an X chromosome from her unaffected father, who carries a new mutation of the HGPRT gene. Under these circumstances, a girl could be born with LNS, and though there are a few reports of this happening, it is very rare. The overwhelming majority of patients with LNS are male.
Less severe forms

When an affected individual has fully developed the three clinical elements of uric acid overproduction, neurologic dysfunction, and cognitive and behavioral disturbances, diagnosis of LNS is easily made. Diagnosis is less easy in the early stages, when the three features are not yet obvious. Suspicion often comes about when the developmental delay of the individual is associated with hyperuricemia. Otherwise, the diagnosis should be alleged when developmental delay is associated with kidney stones (nephrolithiasis) or blood in the urine (hematuria), caused by uric acid stones. For the most part, Lesch–Nyhan syndrome is first suspected when self-inflicted injury behavior develops. However, self-injurious behaviors occur in other conditions, including nonspecific mental retardation, autism, Rett syndrome, Cornelia de Lange syndrome, Tourette syndrome, familial dysautonomia, choreoacanthocytosis, sensory neuropathy including hereditary sensory neuropathy type 1, and several psychiatric conditions. Of these, only individuals with Lesch–Nyhan syndrome, de Lange syndrome, and familial dysautonomia recurrently display loss of tissue as a consequence. Biting the fingers and lips is a definitive feature of Lesch–Nyhan syndrome; in other syndromes associated with self-injury, the behaviors usually consist of head banging and nonspecific self-mutilation, but not biting of the cheeks, lips and fingers. Lesch–Nyhan syndrome ought to be clearly considered only when self-injurious behavior takes place in conjunction with hyperuricemia and neurological dysfunction.